Heroscape’s 11th wave arrived the other day and some valiant play testers stepped up to try out the new pieces with me.

Some of you might have missed the battle recap of an epic Heroscape battle posted at Eric Knight’s blog; these play tests weren’t nearly as involved, but they were a lot of fun.

As you might remember from my last Heroscape review, a wave is a new issue of figures in four packages. This one is titled Champions of the Forgotten Realms, in reference to the Dungeons and Dragons Forgotten Realms campaign world, which ties into the most recent Heroscape expansion set.

Of the four packages of the new wave, the easiest one to get the hang of was The Warriors of Ghostlight Fen. Its hydra and phantom warriors were pretty easy to figure out how to deploy on the battlefield. One of the great things about Heroscape is that the best way to use the figures isn’t always obvious – it requires experimentation, which is nice, because if the battle outcomes were obvious the game simply wouldn’t be as much fun.

Sometimes combinations that seem absurd on the face of it work very well (using phantom knight warriors with minutemen, for instance). A perfect example of this are the elemental warriors in The Fury of the Primordials package, which seemed too easy to destroy until we figured out how best to use them, and then woe to the opposing player. 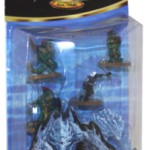 As for the other two packages, Brandis Skyhunter from Heroes of the Faerun is a great antidote to flying pieces, as he pretty much doubles his attack roll against any airborne targets, and Sharwin Wildborn, equally versatile at range and melee, is one of the best wizard figures yet released. I remain curiously fond of the Glaun Bog Raiders in part because of their special ability to bond with dragon heroes, and in part because they’re probably the closest Heroscape will ever get to releasing a Gorn squad.

Maybe I’m too easily pleased, but I can’t find anything bad to say about the pieces. I see the next set scheduled for release is going to be based off of characters from the Eberron campaign world. I expect that will bring us more elves and wizards, which are great fun, but I hope that we haven’t seen the last of the historical figures. Many exciting eras remain untapped.

Dang it! If WotC doesn’t release a Gorn pack, it is imperative we create one!

Thanks for the link.

One of the appeals of Heroscape to me is the cross-space-and-time element. So far, all WOTC has done is release AD&D figs. I find it a bit boring, so I’m getting into customization.

There will not be any Classic Heroscape releases this year, sadly. WOTC seems to be pushing the whole D&D crossover right now, with at least 2 more waves this year.