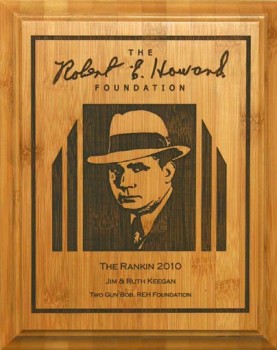 Well, the Preliminary List. There may well not be a more respected organization in Robert E. Howard circles than that of the REH Foundation. Black Gate and a few of its bloggers were on the final 2016 Awards ballot. Last week, the Foundation released the preliminary list for the 2017 Awards. It will be winnowed down to a final ballot soon.

Typing ‘Robert E. Howard’ or ‘Conan’ in the BG search engine (or just clicking on the Conan Category at left) will definitely establish that we love Howard and his works here at Black Gate. And several Black Gaters, including the site itself, are in the running for the 2017 final ballot. I’ll also point out that many of the nominees contributed to our ‘Discovering Robert E. Howard’ series: some of the best Howard scholars came to Black Gate to share their thoughts. The Black Gate contingent:

(Essays must have made their first public published appearance in the previous calendar year and be substantive scholarly essays on the life and/or work of REH. Short blog posts, speeches, reviews, trip reports, and other minor works do not count.)

(The following candidates have recently begun making significant contributions to Howard scholarship through publications and/or presentations over the past few years. Previous winners are not eligible)

BYRNE, BOB – Contributed to TGR Blog and organized “Discovering REH” series for Black Gate
(I am beyond flabbergasted! As I said last year, the series’ nomination is a testament to the excellent essays and authors — not me as editor)

(Eligible candidates are limited to internet sites with substantive static content and material that is primarily devoted to scholarship on the life and works of Robert E. Howard. Websites must have been updated with new content at least once in the previous calendar year. Non-static social media like Facebook and Twitter would not be eligible.)

(The following eligible candidates have produced or contributed something special that doesn’t fit into any other category: scholarly presentations, biographical discoveries, etc.)

JONES, HOWARD ANDREW and BILL WARD – For their “Re-Reading Conan” series at www.howardandrewjones.com

Whether or not the Black Gate group ends up winning any awards, making the preliminary list is a testament to the quality of what some talented folks are contributing around here. It’s THE site for fantasy.

Bob Byrne’s ‘The Public Life of Sherlock Holmes’ column ran every Monday morning at Black Gate from March 10, 2014 through March 20, 2017.

I’ve recently been getting into REH again, especially REH scholarship, which in some ways is more interesting than Lovecraft scholarship.

Cool to see Black Gate people at the fore of REH stuff!

James – Have you seen the expanded ebook version of Don Herron’s ‘The Dark Barbarian’? It’s a steal at a $4.99.

Yes I have. I just bought that ebook and am now reading it. Thanks for heads up though.

Alas – none of the above made it to the Final Ballot. But that’s just an indication of how much excellent stuff is being written about Robert E. Howard, eighty-one years after his death.