You may not be familiar with the term “penny dreadful.” And no one would blame you considering that, until 2014, the term had not been in popular use since the 1890’s.

Back to the 1830s, “penny dreadfuls”were serial stories published weekly on cheap wood-pulp paper aimed at young, working-class men. Each costing one penny, the subject matter of these publications typically focused on the sensationalized and bloody (or “dreadful”) exploits of detectives, criminals, or supernatural entities. Varney the Vampire, a precursor to Dracula, as well as Sweeny Todd made their first appearances in print as subjects of the penny dreadful.

However in 2014, Showtime launched a very successful series by the same name starring Eva Green, Timothy Dalton and Josh Hartnett. Penny Dreadful featured classic characters from Victorian gothic literature such as the Frankenstein’s monster, the wolfman, Dorian Gray and Dracula as well as a host of new human characters including Vanessa Ives, Sir Malcolm Murray and Ethan Chandler. The series ran for three seasons, coming to what many fans (me included) felt was a highly unsatisfying end in 2016 .

Though Penny Dreadful the series was over, the show’s compelling story continued on the paneled page via Titan Comics who launched a five book comic collection in 2016.

Series show writer Krysty Wilson-Cairns and illustrator Louis De Martinis (Heavy Metal and Tron) brought Penny Dreadful back to life under license by CBS Consumer Products. The prequel comic explored the events and mysteries untouched by the TV show and perhaps in a way, placating those fans who chafed at the series finale. It may have done just that, selling out of its debut issue and garnering rave reviews from critics.

“Like all fans, I am so thrilled that we’re returning to the incredible world of the show,” said Penny Dreadful comic editor, Lizzie Kaye. “There are a lot of stories left to tell.” 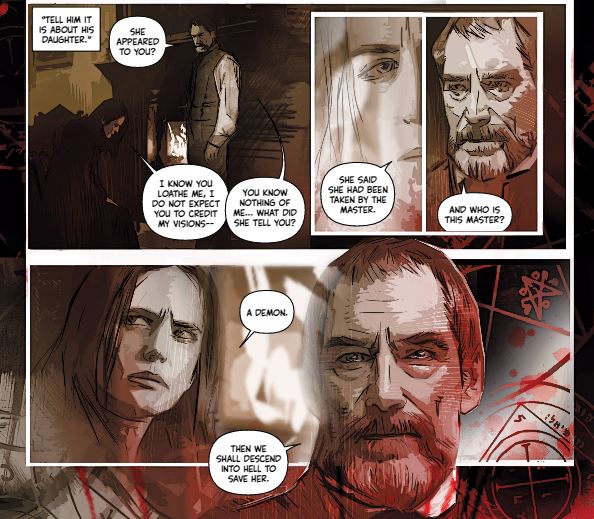 The prequel storyline revealed the terrifying events that led Vanessa to search for her missing childhood friend, Mina Harker, and exposed the true nature of the vampiric monsters infesting Victorian London.

Now you can own all five books of the Penny Dreadful Prequel Comic Book Series in one collectors-edition graphic novel which takes readers and fans (aka “Dreadfuls”) on a heart-stopping journey into this supernatural realm. It is available for preorder today.

As an admirer of specific comics and a fan of Penny Dreadful, I can personally give the comic series an enthusiastic endorsement. Beyond the story, I truly loved the illustrations, which is one of my criteria for a comic being collectible.

As Word of the Nerd so elegantly put it, “(Penny Dreadful) has an abstract gothic style that reminds the reader of rotoscope animation. I immediately thought of Ralph Bakshi’s Lord of the Rings or Richard Linklater’s A Scanner Darkly. It’s abstract, it’s gothic and it’s fun.”

Graphic novel, individual issues or both? What do you prefer in the comics you collect? Personally I like having the individual issues (along with the special covers when available), but then again a graphic novel has its own level of cool. Post a comment or drop a line to sue@blackgate.com.

The single issue vs. graphic novel debate is one with real consequences, not just for personal tastes but because it has a direct impact on the economy of publishers. When too many people decide they’ll wait ’til the trades, it becomes difficult financially to print installments on a monthly basis. Hard to sell single issues in sufficient numbers to keep a series afloat when everyone’s waiting until 5 or 10 issues are collected. And it’s difficult to just lock away a creative team to work until they have enough material to release a graphic novel, because that requires tying them up for months with no revenue coming in at all (although that’s the movie model. I guess the comics industry is still tied more to something like a television series model: you deliver discrete episodic installments).

When I read a series, I don’t really care if I’m reading single issues or a collection, but if they’re single issues I prefer to have a stack of them: reading a single issue on release month to month is too small a bite of narrative.