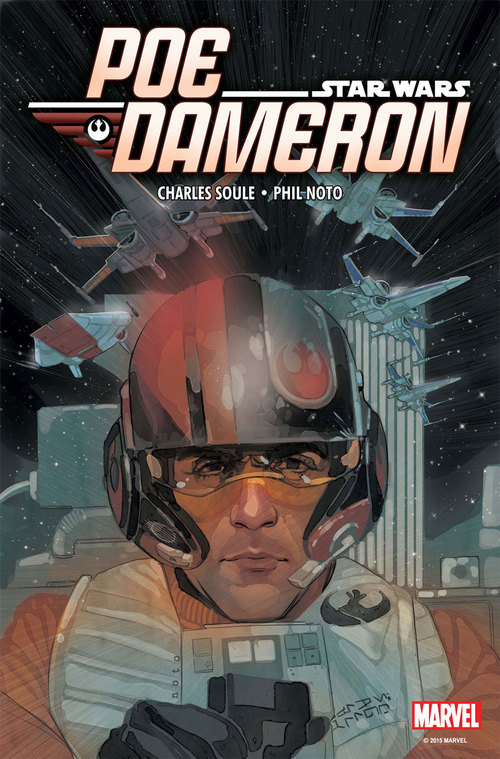 Even since before Star Wars: Rogue One (which I reviewed here), I’ve had Star Wars on my mind. The Force Awakens was a good addition to the canon and I think I’m just generally optimistic about the franchise because George Lucas finally sold it to Disney. I appreciate George Lucas, but recognize (as we all did) that other creators would be able to do a lot more with it.

Dark Horse had the comic license to Star Wars for a long time, but Marvel (also owned by Disney) has had it for the last few years and they’ve been busy.

By my count, the main Star Wars title is past two years, and they’ve had successful and acclaimed miniseries, like Leia, Han Solo, Vader, Vader Down and so on, all helmed by great writers and art teams.

Poe Dameron, of course, is a star in The Force Awakens movie, which happens 30 years after the events of Return of the Jedi. The comic book series is a prequel to The Force Awakens and is very much a secret rebel agent book focusing on Dameron.

Marvel tapped She-Hulk and Inhumans (and many other things) writer Charles Soule and the amazing Phil Noto for pencils. 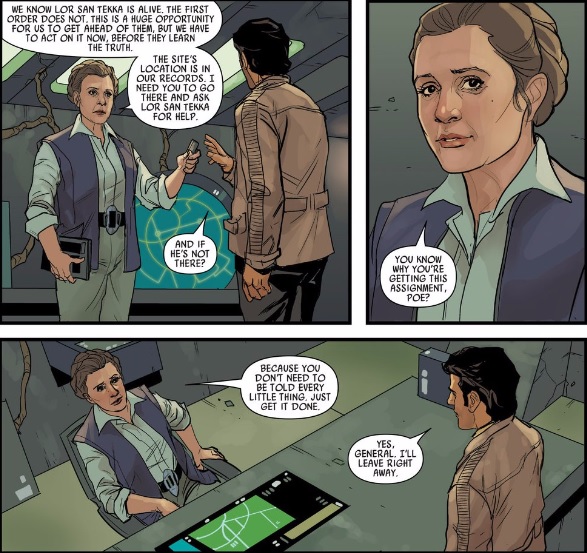 Although he’s the best pilot the rebels have, General Organa really needs him for spy work. She sends him on dangerous missions to contact people and get her information. I suppose this might be a dangerous use of your pilots, but after reading eight issues, Dameron often needs his piloting skills to get out of tight fixes.

I’ve read Soule’s other works, and found Poe Dameron to be less layered – there’s less interiority to Dameron than in Daredevil, Uncanny Inhumans or She-Hulk. That’s not too much of a hit, though. Soule is writing a tie-in to an adventure space opera series and his work is exploding with energy and adventure. 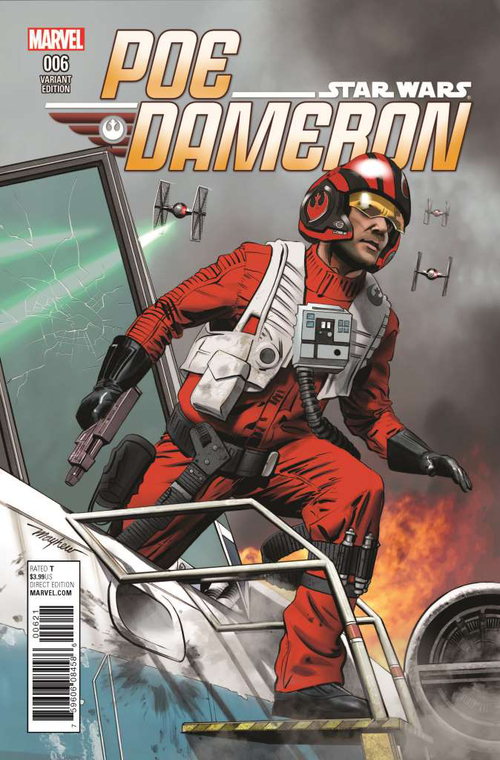 Poe Dameron in the first issue flies through some perilous underground places, runs into his own personal nemesis (Agent Terex a cunning ex-Stormtrooper of the First Order), tricks and outfights the First Order when they have him trapped, breaks into a prison to get information from a Hutt gangster, and runs into a femme fatale “old friend.” 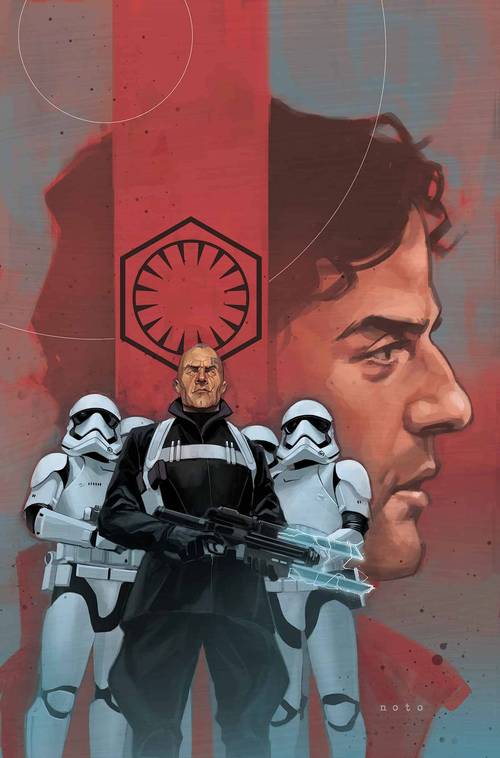 While Poe Dameron is all about the rebellion and idealistic danger and derring-do, Doctor Aphra is 100% opposite. I first ran into her in the Vader series, where she was his occasional lackey and assistant. This series is set in the era of New Hope-Return of the Jedi, so 30 years before Poe Dameron.

Aphra’s specialty: Getting along with others

It was in those issues where she acquired two droids who look like R2 and 3PO, but one is a blood-thirsty battle mech and the other is a sadistic torturing interrogator. Along with a dangerous wookie, Doctor Aphra, complete with her false Ph.D, pursues Indiana Jones/Tomb Raider get-rich-quick schemes to pay off her mounting debts. 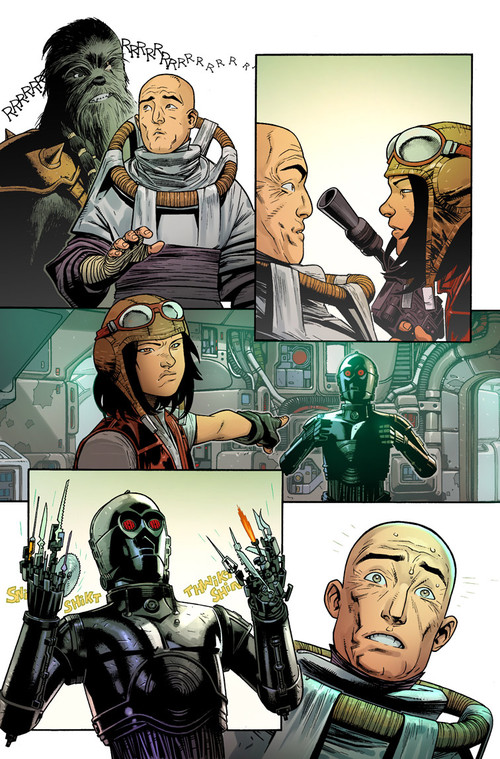 Introducing the torture droid and the wookie to her dad

I’ve only at issue 2 so far, but it’s a lot of fun. Aphra is an outrageous character on her own, written by Kieron Gillen and pencilled by Kevin Walker. 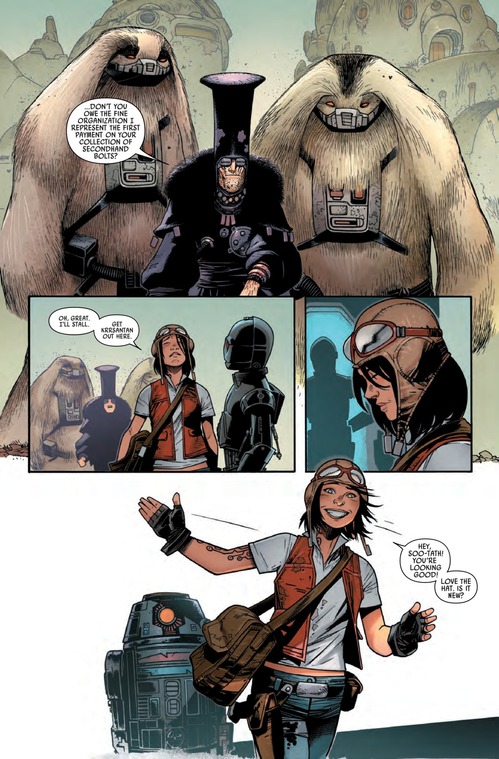 What? Me? Owe you money? I’m good for it.
Trust me! Have you met my droids? 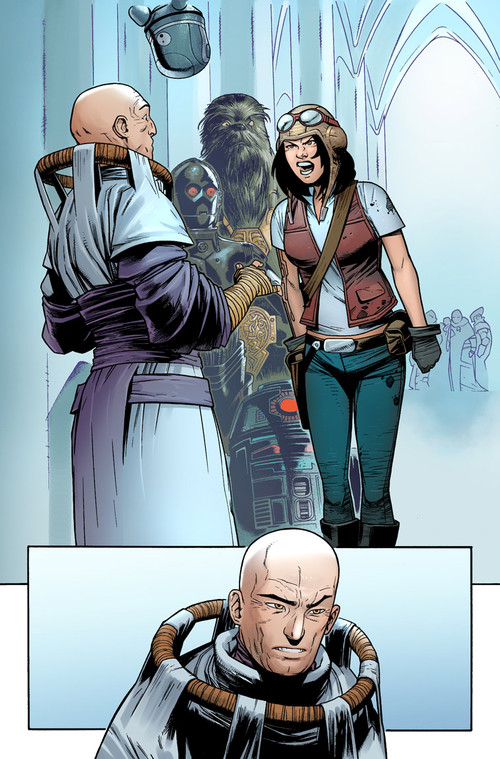