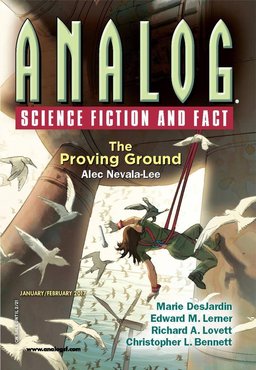 As 2017 dawns, we enter a new era for the oldest continuously published science fiction magazine, Analog Science Fiction and Fact (which has been around since January 1930, when it was called Astounding Stories). With this issue it switches to a bimonthly publication schedule, following The Magazine of Fantasy & Science Fiction and its own sister magazine, Asimov’s Science Fiction.

The cover story is “The Proving Ground,” a novella by Alec Nevala-Lee, whom I first met when he was moderating a panel on John W. Campbell at the 2016 Nebula Awards. The issue also contains “Whending My Way Back Home,” a novelette by Black Gate writer Bill Johnson (“Mama Told Me Not to Come,” BG4), plus short stories and novelettes by Scott Edelman, Edward M. Lerner, Marie DesJardin, Christopher L. Bennett, and many others. Here’s editor Trevor Qachari’s summary from the website.

Birds are mysteriously dying out near a distant wind farm, and something much worse may be in the offing. Can the researchers on this cold, lonely hunk of rock survive “The Proving Ground”? Find out in our cover story, from Alec Nevala-Lee.

Then Richard A. Lovett brings us our fact article, “Rendezvous with a Comet: How ESA’s Rosetta Mission is Decoding Ancient Planetary Mysteries,” and the title says it all.

Then we have people born to die struggling to live in Scott Edelman’s “After the Harvest, Before the Fall”; kidnapping and cultural conflict in Christopher L. Bennett’s “Twilight’s Captives”; a race to find bizarre signals in Canada in Tom Jolly’s “Catching Zeus”; some very alien aliens in both “Dall’s Last Message,” by Antha Ann Adkins, and “Briz,” by Jay Werkheiser; a look at the things we do for companionship, in Marie DesJardin’s “Long Haul”; a slight slice of semi-silliness in Stanley Schmidt’s Probability Zero, “Throw Me a Bone,” and more, from Thoraiya Dyer and Alvaro Zinos-Amaro, Bill Johnson, Andrew Barton, Marissa Lingen, Tom Greene, Joel Richards, Edward M. Lerner, and Guy Stewart, as well as all our regular columns and features, plus our annual index and Analytical Laboratory ballot.

“The Proving Ground” by Alec Nevala-Lee

“Twilight’s Captives,” by Christopher L. Bennett
“The Shallowest Waves,” by Thoraiya Dyer & Alvaro Zinos-Amaro
“After the Harvest, Before the Fall,” by Scott Edelman
“Whending My Way Back Home,” by Bill Johnson

Rendezvous With a Comet: How ESA’s Rosetta Mission is Decoding Ancient Planetary Mysteries, Richard A. Lovett

Throw Me a Bone, Stanley Schmidt

The January/February issue is on sale until February 21. The cover is by Kurt Huggins.

We last covered Analog with the October 2016 issue.

Our December Magazine Rack is here. See all of our recent fantasy magazine coverage here.