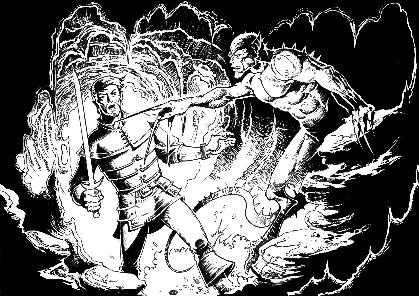 This time Inetd stayed put. He was on the north coast, in an area which used to be popular with the Players, back when there were lots of naval actions. Now the fleets tended to stay close to home, and this area was mostly abandoned.

We came through a cut in the hills, down to the beach. We stayed in the dunes, in the grass, up where the footing was better for the horses, not in the loose stuff down by the water. Finger said that Inetd was living in a cave about halfway up the side of a hill. One side of the hill sloped down to an open field, and then to the woods. The other side of the hill ended in a set of cliffs that fell, near vertical, down to the sea.

“Almost got me that time, Inetd,” a voice said. It echoed from the rocks, off the cliff, and out to sea. I looked across and down the dunes and saw a warrior, body twisted around the boulders at the base of the cliff.

I waved Iago and Finger down the opposite slope of the dune, out of sight. I dismounted, sent my horse after Iago, and got down on my belly. I crawled down the seaside slope, from rock to bush to low-slung tree, hugging every bit of cover I could find.

“Leave me alone,” another voice, rough and harsh, boomed out of the cave.

“I’m dying over here, Inetd. Don’t know if I’ll make it off these rocks. What a pity that all my valuable possessions will be washed out to sea along with my body,” the warrior said.

“Ingraham, you and everything you own can wash into the deepest hole in the deepest ocean and I won’t burn the smallest candle in the lowest chapel. Go away and leave me alone,” Inetd answered.

“The last time I tried to make sure you were dead, I nearly ended up dead myself,” Inetd answered. “Fool me once, shame on you. Fool me twice, shame on me. Now, go away and let me get some sleep!”

Ingraham waited a few more seconds, then stood and walked away from the cave. As he got closer I could tell he was a Player Combatant. As he got even closer, I saw his face and I remembered him.

There are Players, and there are Players. Most of them are out for an adventure, or they just want to meet friends and talk shop. QuestWorld was where they came to relax and try something different. They were not deliberately cruel to a Nipsy, any more than we are cruel to horses. We were part of the furniture of the world, and furniture only gets hurt when it gets in the way.

A few Players were different.

Ingraham was a Professional Player. His job was to build up his character, until it was powerful and full of abilities and magic. Then he put his character up for auction, sold it, and then started over again.

The Professionals deliberately sought out the most powerful Nipsies they could find, to either take their magic, or to kill them and gain experience. Nothing personal about it, but their job was to break the furniture.

Inetd was furniture. So was I.

The last time I saw Ingraham he was auctioning himself in the middle of town. I remember I looked up at him, and he looked down at me, and smiled.

That smile still haunted my dreams.

I slid deeper into the sand behind my favorite boulder.

I thought about killing him when he walked by me. I’d like to say I am too honorable to strike someone in the back, when they don’t even suspect I am around, but that kind of sentiment is reserved for Nipsy Unaware Combatants. I fought to win, and I just wasn’t sure I could get in a killing stroke against this guy. I might make it, but I might not.

And, unlike him, I only had one life to give.

I waited until he was gone, safely out of sight. Then I stood, brushed the sand off my armor, and walked up to Inetd’s cave.

Suddenly there was a sword at my throat, the tip just below my Adam’s apple. I was very, very glad I was clean shaven, because I wanted the owner of that sword to know exactly where to stop that point. Even so I felt a scratch, and then the cool trickle of blood down my neck.

“Just stay exactly where you are,” a voice, surprisingly low and close, told me. “Move one muscle, try to say one magic spell, and you are dead.”

I took him at his word, and did my best to imitate a statue.

Inetd rose out of the darkness in front of me. He was half a head taller than me, with scaly red skin, over-muscled arms, and legs which ended in hooves. His head was completely bald, and he smelled like the inside of a hog confinement. He was a perfect example of why most Daemons are not sought after dinner guests.

“Who the hell are you, what do you want, and why shouldn’t I kill and eat you?”

I smiled, but not very well, and slowly opened my mouth, then shut it gently. Inetd grunted and pulled back the sword, not much more than an inch. I realized it was not a sword, but an incredibly overgrown fingernail, as long and hard and sharp as a sword.

And it was dirty as hell.

“Try a spell, and I’ll slit you before you finish the first syllable,” he said.

Inetd jerked at that, and the nail wavered and sagged and scraped across my chest armor. He caught himself and brought it back up to my throat.

“Russ the Maker,” I said. “He said you were the only one who could help me and my friends. I want that help.”

“And why should I help you? Especially if I’m the only one who can help you?” Inetd sneered. “What are you going to give me? Money? Power? I don’t want either one of them. There’s nothing you can do for me, Player. Nothing that I want.”

…roll them bones, pray for anything but snake-eyes, and hope the bones aren’t yours…

I took a deep breath.

“You are going to help me,” I said, “Because I am the only one who can help you get what you really want. And I’m not a Player. I’m a Nipsy Aware.”

“You don’t have any idea what I want,” Inetd said, but he sounded just a little uncertain. “No one does.”

“I know what you want. I want the same thing,” I said with confidence. “So, unless you want to end up dead, or worse, as a Daemon Unaware, I strongly suggest you get that damned thing away from my throat and listen to what I have to say.”

The swordnail hesitated, then dropped away from my neck. He lowered it down my body, but he did not put it away. His new target might not be immediately fatal, but it made me even more nervous.

“The name is Sir Linux,” I said. “And I know exactly what you want.

“You want to be left alone.”

The complete version of “Mama Told Me Not to Come” appears in Black Gate 4.