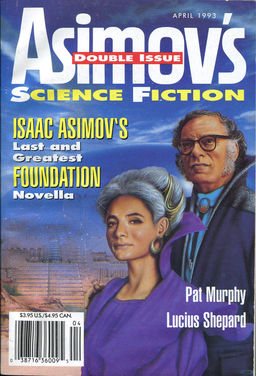 Way back in January 2009, F&SF edition Gordon Van Gelder announced that his magazine would be switching to bimonthly publication. Instead of 11 issues a year, including a special double-sized issue every October, F&SF would publish six double issues a year, in an attempt to reduce mailing costs and other overhead. At the time there were ominous rumblings and dire prophecies, but it seems to have worked out nicely for the magazine, which has been been publishing regularly every since.

Since then I’ve been waiting for the other shoe to drop — meaning, when would the two remaining print SF magazines, Analog Science Fiction/Science Fact and Asimov’s Science Fiction, follow suit? And on Wednesday Locus Online broke the news that both magazines would be switching to bimonthly publication starting in January 2017.

Asimov’s editor Sheila Williams explains in a forthcoming editorial that the magazines will now publish “six 208-page double issues” per year, a 16-page increase over current double issues. She expects the change will allow her to publish more novellas and a higher percentage of original cover art. Despite the change in publication schedule, she says readers “will receive the same number of pages of fiction as in the past,” and subscribers will “receive the same number of issue months” they purchased. Publishing bimonthly will allow them “to hold the current subscription prices a bit longer.” Both periodicals are published by Dell Magazines.

Speaking as someone who enjoys the big double issues, I view this as a positive development — and anything that helps the magazines save costs is a good thing. The current double-issue size is 192 pages, so the increase to 208 pages is another welcome change. However, it is a rather historic milestone for the genre. As Jonathan Strahan puts it:

Moving to a point where we have no monthly print fiction magazines left seems like some sort of turning point, though I don’t know towards what.

Visit the Asimov’s website here, and Analog here. See our November Fantasy Magazine Rack here, and all of our recent Magazine coverage here.

This is too bad, although hopefully it stays at the same level of material like it promises for quite a while to come!

It is also sad that there are no more monthly print magazines, however there are a fair few online still for us digital types to enjoy.

I think that the print age coming to an end is a sad thing but there are already more print issues than I’d ever have time to read so we’ll make it somehow!

Just as long as they survive!

> Just as long as they survive!

> It is also sad that there are no more monthly print magazines, however there are a fair few online still for us digital types to enjoy.

That’s the truth. I prefer the print magazines when I curl up in my big green chair… but I can’t get too depressed about the state of SF magazines when there are so many great new online venues.

Thanks for this news, John. I subscribe to both (in print copies) and have for the last six years — and neither has seen fit yet to let me know. Even a quick e-mail woulda been nice…

Sheila has a big editorial making the announcement in the January issue of Asimov’s. But she gave a few folks in the industry an early head’s up to help get the word out.

…And I got my postcards from both today to tell me all about the change. I DO like the idea of extra pages, but now the wait between issues will be twice as long. But then again, so much NEW stuff keeps getting mentioned at Black Gate, I guess I’ll never really run out of my favorite reading matter!