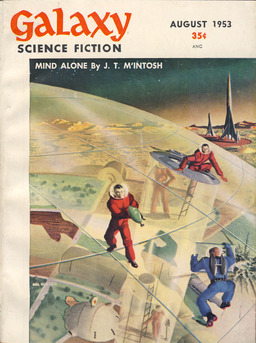 The August 1953 issue of Galaxy Science Fiction has an intriguing cover titled “Dome Repairs on Mars” by Mel Hunter. But the cover is just the start of the fun…

“Mind Alone” by J. T. M’Intosh — Muriel Martin doesn’t know who she really is or that she came from the planet Murrane. She’d found out too much about the purpose of the war between Earth and Murrane, but instead of killing her, they wiped her memories and dropped her on Venus.

Though her past is erased, Muriel’s intelligence and curiosity remain. And given enough time, she’s formidable enough to discover those secrets again

This story was really good in a lot of ways. Except that I couldn’t quite buy the romantic tie-in. It seems to be a pattern in these older issues that if there’s a young woman and young man, they will inevitably have a romantic relationship, no matter how forced it might seem. There’s some degree of realism in that kind of premise, I suppose, but I’d also like to see characters who, for whatever reason, are fine with not dating anyone. And I think Muriel would have been a much stronger character if she was solely focused on her own agenda.

“We’re Civilized!” by Mark Clifton and Alex Apostolides — Humans arrive on Mars to claim it for their own. Captain Griswold, who tends to be of a conquering mindset, allows for the possibility of sentient life. If their scientist, Mr. Berkeley, can prove the existence of a civilization, Griswold is prepared to leave. After all, the last thing he wants is to become another villain in history. Well, maybe it’s not quite the last thing.

I was hoping the story might move beyond the expected — that perhaps Captain Griswold wasn’t quite so determined in claiming Mars. It might have been more interesting if the scientist was the one pushing to land on the planet while the captain felt uneasiness. As it is, there’s not a lot to it, and even the twist ending isn’t that intriguing. 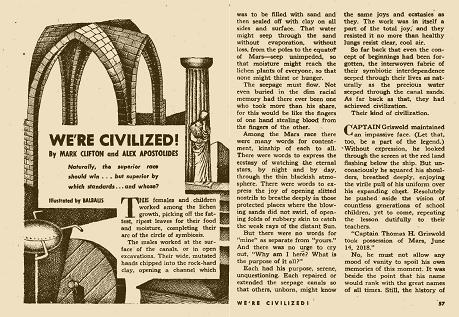 “Diplomatic Immunity” by Robert Sheckley — A galactic ambassador arrives on Earth, excited about his discovery of the planet and its inevitable annexation into his organization. His purpose is to convey the philosophy of the organization in order to better prepare everyone for the future. Meanwhile, his very existence is sending a signal light years into space that will draw larger follow-up crews to force the annexation. The only way to destroy the signal is to kill the ambassador, but all attempts at doing so have failed, for his body seems to react to every possible attack in a way that keeps him immune.

This is a good story — figure out how to kill something that can’t be killed. Forget about characters, setting, or anything else. Just kill the ambassador. I’m not sure it’s the type of story that many authors could pull off, but Sheckley does it well. 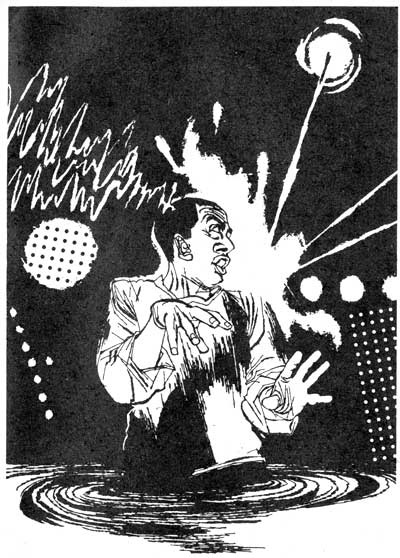 “The Trap” by Betsy Curtis — It’s difficult for Barbara Noble to get old. As one of the scientists who helped create the formulas for rejuvenation, the Juvine Perpetual Youth Corporation wants her to keep using them. As long as she’s alive, their formulas are safe, but if she grows old and dies, the formulas become public property.

I like the humor and concepts behind the story. And the characters seemed more substantial than most characters in older science fiction. 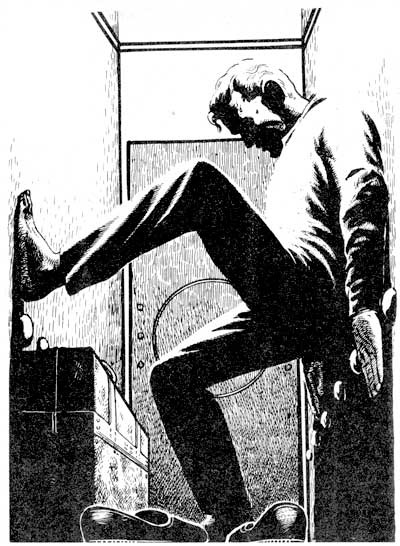 “The Trap” by Betsy Curtis

“Minimum Sentence” by Theodore R. Cogswell — Flip and Potsy will soon be incarcerated for at least twenty years. They have only a few weeks before sentencing, but perhaps they can leave Earth. Unfortunately for them, no human ship can go faster than the speed of light, and aliens refuse to share their engine technology. Their only hope is to get their alien friend, Quang Dal, to build them an engine. They just need to make him think that he’s building it for himself.

This had an interesting alien culture and appearance mixed with some unintelligent goons. It’s a fun read. 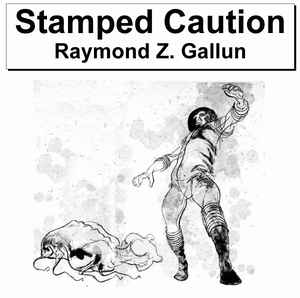 “Stamped Caution” by Raymond Z. Gallun — A Martian ship crashes on Earth, but an infant alien survives. Scientists study and raise the alien, surprised at its intelligence. Over the years, they find a way to communicate effectively with their adopted Martian, whom they name Etl. When there’s an opportunity of sending humans to Mars, the man in charge of the mission suggests they take Etl with them in order to connect with the Martians on a diplomatic level. There’s only the question of what Etl might do when it’s reunited with its own kind.

I really enjoyed this story. The narration works well; it’s a first-person narrative from one of the scientists and how he draws close to Etl. And the story itself moves at a good pace without any needed twist endings or gimmicks.

Gallun (whose name rhymes with balloon) was a prolific science fiction author, having his first published story when he was 18.

Matthew Wuertz’s last retro review for us was the July 1953 issue of Galaxy.