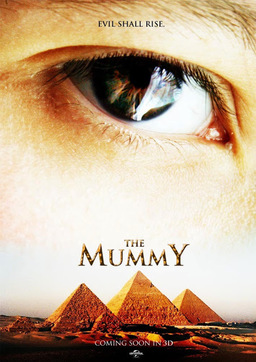 I don’t even know where to begin. But pour yourself the adult beverage of your choice and roll a bit closer to the keyboard while I bring you sad tidings.

Back in October, I thoroughly bummed myself out right before the day around which my entire year revolves, by reporting the relentless assault Universal Studios was perpetuating on its own classic monster movie catalog. First in the line of this death-march to the box office was a remake of The Mummy starring Tom Cruise.

Though I am definitively and forever not a fan of Tom Cruise, I am a fan of a well-made or at least well-intentioned horror movie. I held out the slimmest hope that having been the literal celluloid birthplace of the entire lineup of classic monsters, Universal Studios might, just might, opt to protect the originality of their creation, therefore respecting the reverence with which their creatures were held by the fans.

This week saw the release of the full trailer for The Mummy, which will be loosed on an innocent public on June 9, 2017. Assuming that this trailer, like any other, contains the best bits of the film and is sincerely meant to make you want to see it…

Of the 2 minute, 34 second snippet, the first 1 minute 19 seconds is consumed with a very Mission Impossible / Jack Reacher style, CGI’d-within-an-inch-of-its-life plane crash which Tom Cruise apparently doesn’t survive, until he does – without a mark on his tiny but toned visage. Then queue the car crashes, explosions and under-water scene that includes a brief glimpse of “Princess Ahmunet” (yes it’s a she-mummy this time around) and Russel Crowe attempting to be ominous.

By the way, Amunet (translated “the female hidden one”) has gotten quite the resurrection in Hollywood of late. Showtime’s series Penny Dreadful already dug her up in the character of Vanessa Ives (played by Eva Green) who implied to be an incarnation of Amunet.

The most entertaining thing about this is the comments posted by the YouTube viewers; the best of which might be “Brendan Frasier can kill that mummy in a second.”

I can’t think about this anymore – see for yourself.

Okay, let’s hear what you have to say. Post a comment here so everyone can enjoy, or drop a line to sue@blackgate.com. Amunet herself knows I need a bit of cheering up.

Did nobody heed the many lessons of Van Helsing?

As disappointed as I am with this one, I don’t think Brendan Frasier could kill her in a second. With Sofia Boutella in the title role, when Mr Frasier pulls the trigger, it’s unlikely the mummy will still be where he’s aiming.

Thought the trailer had ‘Turkey’ written all over it.

Is it just me or does Tom Cruise have a slightly distracted look about him these days? He gave off the same vibe in the trailer for the second ‘Jack Reacher’ movie.

I can’t believe this cinematic turd has the audacity to quote one of the truly great monster movies, Bride of Frankenstein. This does not look like a “New world of Gods and Monsters” it looks like crap.

Haha! That tag line cracked me up! Great title for this post.

I just snorted my latte out of my nostrils reading these comments. Can’t help it – seeing the word “turd” in writing tickles my forth-grader sense of humor.

Aon, you are so right about Tom’s distracted look. He dare not take his eyes off the sky in case he misses the mother ship…

You all rock utterly.

Looks terrible compared to versions with Fraser, Cushing/Lee and Karloff.

Heck, I’m betting the Ronald E. Howard (you know, that Sherlock Holmes guy) version will be better than this.

You nailed it perfectly as just another Mission Impossible-like sequel. The Mummy “franchise” is no longer a horror movie. I’m starting to wonder if for some of the movie-going public, narrative is now passe and the movie is just a high def visual accompanied by intense sound to mimic an amusement park ride.

Howard’s “Curse of the Mummy’s Tomb” (1964) might have been a “gauze-wrapped, bandage-plastered shambler inscribed with hieroglyphics”, but you’re right – it had its merits in a cheesey way and I still be its better than this mess.

I love the word “craptacular” – says it all.

Not sure how much you’ve heard about the bigger picture with all of the Universal Monster pics being queued up for release. I have no interest in this mummy movie, but I think it’s interesting — not necessarily good, but interesting — that Universal has decided to launch their own shared universe, following the success of other franchises like Marvel, DC, Star Wars etc. Interesting because, of course, they were the first to do it, with their original monster pics and the crossovers back in the ’30s and ’40s.

So, apparently they’re taking the classic monsters and setting them all in present day for the UMSU (Universal Monsters Shared Universe). Crowe is reportedly Dr. Jekyll. Johnny Depp is slated to be the Invisible Man. Dwayne “The Rock” Johnson is possibly going to be the Wolfman. Angelina Jolie may be the bride of Frankenstein. (I’m NOT making any of this up.)

The conception — re-launching the first cinematic shared universe / crossover franchise — is great. Alas, the most frightening thing about the whole prospect might turn out to be the execution.

Oz my friend – I totally believe you. Click the link in my article that reads “back in October”.

And, the hell? Did you blow off Goth Chick News that week or what…?

I saw the trailer, I think this full one, on TV last week, and am appalled. I’ve been done with Cruise since I walked out of the theater halfway through Cocktail, but regardless of the actor, the concept and scriptwriting here are abysmal and wrong-headed.The Karloff Mummy was, and still is, the version to watch, not this forthcoming dreck. And they have the nerve to advert is 6 months ahead of release? No, no, no.

Not wishing to take away from the part where, holy cow, this looks like a train wreck, but if nothing else it sounds like they did as much practical stunt-work as they could — large parts of the plane crash sequence were apparently shot in the vomit comet in actual free-fall.

I didn’t mind the preview until it got around to deploying various mummy-powers. If anything sentient actually had abilities like that, the hero would be dead immediately, period.

Also, when will Hollywood get tired of: a) blowing up planet earth, and b) blowing up well-known monuments, in this case Big Ben and the various attached Houses of Parliament. The only person this preview will really resonate with is Guy Fawkes.