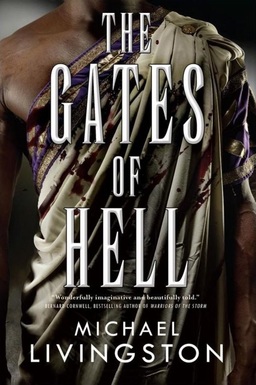 Michael Livingston’s stories for Black Gate made him a favorite among our readers, so I was looking forward to seeing how the wider world would react to him with the publication of his first novel, The Shards of Heaven, a historical fantasy that reveals the hidden magic behind the history we know. I was not disappointed. Library Journal called it “Top-noth,” and bestselling writer Bernard Cornwell called it “A brilliant debut.” And Sam Reader at the B&N SF Blog gave it this rave review:

The Shards of Heaven is breathtaking in scope. With the first volume of a planned series intertwining Roman history and myth with Judeo-Christian mythology, Michael Livingston has created something truly epic… He uses real events and characters as the backbone for a truly inventive epic fantasy like novel, a massive undertaking that launches a tremendously ambitious series.

The Gates of Hell is second volume in the series; it’s available in hardcover from Tor on Tuesday.

Alexandria has fallen, and with it the great kingdom of Egypt. Cleopatra is dead. Her children are paraded through the streets in chains wrought of their mother’s golden treasures, and within a year all but one of them will be dead. Only her young daughter, Cleopatra Selene, survives to continue her quest for vengeance against Rome and its emperor, Augustus Caesar.

To show his strength, Augustus Caesar will go to war against the Cantabrians in northern Spain, and it isn’t long before he calls on Juba of Numidia, his adopted half-brother and the man whom Selene has been made to marry — but whom she has grown to love. The young couple journey to the Cantabrian frontier, where they learn that Caesar wants Juba so he can use the Trident of Poseidon to destroy his enemies. Perfidy and treachery abound. Juba’s love of Selene will cost him dearly in the epic fight, and the choices made may change the very fabric of the known world.

Michael Livingston’s most recent blog post for us was his 2015 article on the challenges of writing longer fiction.

Transitioning from Short Story to Novel by Michael Livingston

Looks like I need to get on it and finish Shards of Heaven. What I have read of it so far I have really enjoyed.