There’s a lot of writing advice in the world. A person trying to read it all, in fact, would likely never be able to get anything written: I suspect more is written about writing in a given day than any one person could feasibly read in that same timespan.

That doesn’t mean that writing advice isn’t useful, of course, because it can be absolutely essential to a writer’s development. In my case, for instance, one of the key bits of advice I ever received as a young novelist-to-be was to try to cut my teeth on writing short stories. Doing so, it turned out, allowed me to hone my craft in smaller, more manageable chunks. It also led me to my first fiction sale: to Black Gate, which published my story “The Hand That Binds.”

Publishing short stories was an amazing experience. In composing and selling short fiction I learned far more than I could have ever imagined, and each of those “little” victories of publication were a shot in the arm of the best drug available to a writer: the confidence to know you can do it. So for me (though admittedly not for everyone), starting with short stories was vital to the development of my career.

What I want to talk about today, though, is that next move: transitioning from short stories to novels. Because although I loved (and still love) writing short fiction, I knew I wanted more. I wanted to be a novelist. What follows are the five principles and one rule that helped me make that leap.

A novel is longer than a short story, of course, but the move to novels isn’t about scaling up the word count. Not at its core. To the contrary, it’s about scaling up the ideas, the characters, the conflict, the world. Do those things, and the word count will follow. That first short story for Black Gate, for example, was a retelling of the first part of Beowulf through the eyes of a bard in King Hrothgar’s court. The idea was relatively simple: what would it be like to witness the events of this great story from a third-party perspective? For “The Hand That Binds” I had a single point of view and a single narrative thread. And it was, I think, a fairly successful tale. For my novel The Shards of Heaven, on the other hand, the idea was to imagine that the power of God had been divided into some of the great artifacts of history — like the Trident of Poseidon and the Ark of the Covenant — and these were being sought by multiple parties during the rise of the Roman Empire. The novel has five different points of view, and conflicts within conflicts within plot twists. It’s scaled up, in other words, into a novel. 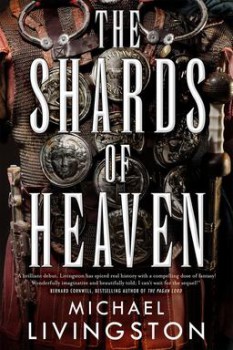 I never felt like I needed to have a working schedule when I was writing short fiction. If I was struck by an idea, I would sit down and get it done. Sometimes the process took a weekend, sometimes it dribbled out for a couple weeks, but rarely did I need to worry about making time to write. Yet that kind of working process doesn’t work with a novel. Because of time constraints, of instance, the sequel to Shards had to be written in about three months. There’s simply no way I could have managed that without a conscious and consistent schedule. What that schedule should look like depends on you, but you really need to build in regular time for producing work.

When I was in college, I drove an old Jeep CJ-7 that was prone to breaking down at inopportune times. As a result, I became rather adept at pushing it out of traffic. As I’ve transitioned from short fiction to novels I’ve found that what was true of pushing my old Jeep is true of writing in the long form: momentum matters. This is actually a corollary to the Make Time Principle, because the idea of having a working schedule is to keep the ball rolling. It’s about maintaining momentum. There are so many distractions that can keep you from the written word — television, Facebook, writing angry rants on your website — and in the end you must find a way to push them aside in order to hold onto your momentum.

When it comes to writing (at whatever length), only one goal ultimately matters: completion. Lots of people are writing a novel; very few have finished one. And since a completed novel is rather essential to selling it, nothing could be more important (or more beneficial to becoming a professional novelist) than finishing. At the same time, when you’re staring at a blank page 1 of a 100,000-word (or more!) novel, the end can seem a cripplingly long way off. If so, break it down. In my Shards of Heaven series, for instance, my chapters average a little over 3,000 words each. So my writing goal is to complete the next chapter. Other writers use a word-count goal. If writing a short story can be a burst of creativity like a 50-yard dash, novel-writing is without question a grueling marathon. To get to the distant finish line you must keep pushing yourself forward to reach that next mile marker, then the next, then the next ….

A sense of progress (meeting those goals) helps you to maintain momentum, which makes it far easier to make time to write. For obvious reasons, even the simplest outline can make the tracking of progress far easier. I myself use just a rudimentary one-page outline of chapter descriptions, like this one for chapter 1 of The Shards of Heaven:

Juba meets Syphax (who witnessed his father’s death); gains the Trident of Poseidon; orders Laenas to kill him.

That took 3,274 words as it happens, and when I finished it (goal completed!) I was 1/30 of the way through the full novel, which sure made it easier to have the momentum to finish chapter 2, and so forth. If you have a daily word-count goal, track it. Get a calendar and mark off each day you meet your goal. Even if you are so busy that you can only make time for a momentum-maintaining goal of 300 words a day, you’ll have a novel in a year. Track it and watch it grow!

Those five principles guided me through my own transition from short stories to novels, but it’s important to note that no two writers (just like no two writings) are the same. It is for this reason that I want to leave you with what I call the One Rule to Rule Them All:

Your journey may look nothing like mine, nor like that of any other writer. That’s fine. In the end, all that matters is that you find the process that works for you. You’ve got to just get it done. Do what works.

And then, if you could, please share with the class. What’s working for you?

Michael Livingston holds degrees in history, medieval studies, and English. He is an Associate Professor of English at the Citadel, specializing in the Middle Ages. His short fiction has been published in Black Gate, Shimmer, Paradox, and Nature.   MichaelLivingston.com. @MedievalGuy. Goodreads.

Scale Up is such important advice.

When I was working on my dissertation, my director said observed that I was trying to do on the level of the paragraph what I needed to do on the level of a five-page section with a title. She said, “You are writing a tapeworm. Aside from a head, every paragraph has a complete set of all the organs it needs to live, but it will never do what you want it to do. You need to write a whale. Your whale needs a liver the size of your car.”

That totally turned around my dissertation process, and after grad school I wrote 300,000 words of an entirely-too-long novel in a year. Now I’m trying to scale down from whale to porpoise, or maybe otter. For me, it’s been much harder to scale back down than it was to scale up.