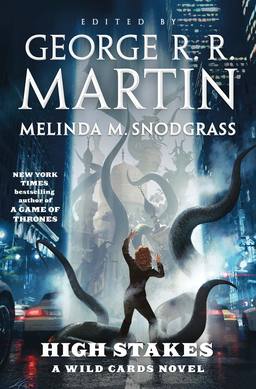 Wild Cards is one of the longest-running shared universes in existence, outlasting Robert Asprin’s Thieves World, Emma Bull and Will Shetterly’s Liavek, C. J. Cherryh’s Merovingen Nights, and many others (the only one with a comparable run I can think of is Janet and Chris Morris’ Heroes in Hell, which began in 1986). The first volume, Wild Cards, was published in 1987 by Bantam Books; there have been 23 novels and anthologies since then, from 31 authors and four different publishers. That’s a heck of a run.

The premise of the series is pretty appealing for anyone who likes superheroes or pulp fiction.

In the aftermath of World War II, an alien virus struck the earth, endowing a handful of survivors with extraordinary powers. Some were called aces – those with superhuman mental & physical abilities. Others were termed jokers – cursed with bizarre mental or physical disabilities. Some turned their talents to the service of humanity. Others used their powers for evil.

Wild Cards is their story.

It’s been in the news recently primarily because it’s the next big series licensed to television by George R.R. Martin, hot on the heels of his globe-spanning success with Game of Thrones. Universal Cable Productions (The Magicians, Mr. Robot) acquired the rights this summer, and brought on co-editor Melinda Snodgrass as executive producer.

The 23rd book (excuse me, “mosaic novel” — really an anthology with a fancy name) in the series is High Stakes, written by Melinda M. Snodgrass, John Jos. Miller, David Anthony Durham, Caroline Spector, Stephen Leigh, and Ian Tregillis, and edited by George R.R. Martin and Melinda M. Snodgrass. It was released in hardcover by Tor on August 30.

Perfect for old fans and new readers alike, High Stakes (Wild Cards) delves deeper into the world of aces, jokers, and the hard-boiled men and women of the Fort Freak police precinct in a pulpy, page-turning novel of superheroics and Lovecraftian horror.

After the concluding events of Lowball, Officer Francis Black of Fort Freak, vigilante joker Marcus “The Infamous Black Tongue” Morgan, and ace thief Mollie “Tesseract” Steunenberg get stuck in Talas, Kazakhstan. There, the coldblooded Baba Yaga forces jokers into an illegal fighting ring, but her hidden agenda is much darker: her fighters’ deaths serve to placate a vicious monster from another dimension. When the last line of defense against this world weakens, all hell breaks loose, literally….

The Committee in New York sends a team of aces to investigate. One by one, each falls victim to evil forces–including the dark impulses within themselves. Only the perseverance of the most unlikely of heroes has a chance of saving the world before utter chaos erupts on Earth..