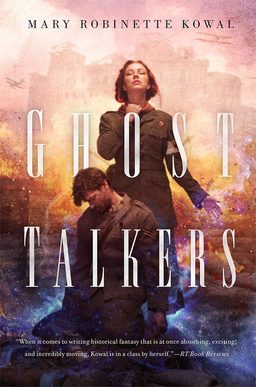 Mary Robinette Kowal won the John W. Campbell Award for Best New Writer in 2008, and she has won the Hugo award for her short fiction several times. Her latest novel is Ghost Talkers, a tale of the mysterious spirit corps, trained to glean crucial intelligence from dead soldiers in World War I.

Ginger Stuyvesant, an American heiress living in London during World War I, is engaged to Captain Benjamin Hartshorne, an intelligence officer. Ginger is a medium for the Spirit Corps, a special Spiritualist force.

Each soldier heading for the front is conditioned to report to the mediums of the Spirit Corps when they die so the Corps can pass instant information about troop movements to military intelligence.

Ginger and her fellow mediums contribute a great deal to the war efforts, so long as they pass the information through appropriate channels. While Ben is away at the front, Ginger discovers the presence of a traitor. Without the presence of her fiance to validate her findings, the top brass thinks she’s just imagining things. Even worse, it is clear that the Spirit Corps is now being directly targeted by the German war effort. Left to her own devices, Ginger has to find out how the Germans are targeting the Spirit Corps and stop them. This is a difficult and dangerous task for a woman of that era, but this time both the spirit and the flesh are willing…

Mary is best known for her popular Glamourist Histories fantasy series from Tor, the first two of which were nominated for a Nebula Award. We covered all five volumes in the series:

I ahevn’t read any of her other novels, but this one sounds pretty interesting!

That’s the risk of doing a 5-book series as your first novels… you don’t connect with anyone who’s not interested in the series.

Now that’s she’s branching out, I expect her to get a lot more readers.