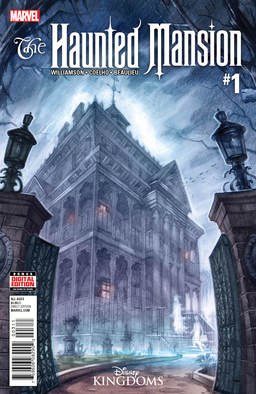 Back in March I explained the odyssey undertaken by Black Gate photog Chris Z and I to obtain copies of Marvel Comics’ just released Haunted Mansion #1, a one-off series of five issues inspired by my favorite ride in the park.

But now that the fifth and final issue is about to be released on July 27th, it’s time to explain why all you pseudo-grownups need to own this collection and not pass them over thinking they’re targeted only at the kiddies.

You see, early in the first issue readers encounter a ghost. This part is expected of course, as Haunted Mansion lore tells us there are 999 of them living inside the manor.

Only this ghost isn’t of the “grim, grinning” sort, as described in the attraction’s theme song. No siree, this ghost is serious, horror-comic stuff; all bones and menace and flailing sword.

Remember, this is Marvel as much as Disney.

It makes sense for a comic that we can go a little more sinister here and there. I think that’s going to compel readers to continue on. I think it’s different in an eight-minute attraction, but in something that’s a series, you need tension, you need mystery.

The house itself is a personality, and the various elements are a personality. In the endless hallway with many, many doors, your mind may begin to wonder. There are many places in this Mansion that we’re not getting to see. ‘I wonder what they are?’ That’s what the comic really allows us to do — to walk around in our mind and expand our imagination about what the house is and who the rest of the inhabitants are.

Since its California doors creaked open in 1969 (Florida’s opened two years later), the Haunted Mansion has specialized in mystery. What do hitchhiking ghosts have to do with the jolly ghouls who are seen frolicking in a ballroom? What about the bride in the attic? Does she have any connection to the spirit who appears in a crystal ball? 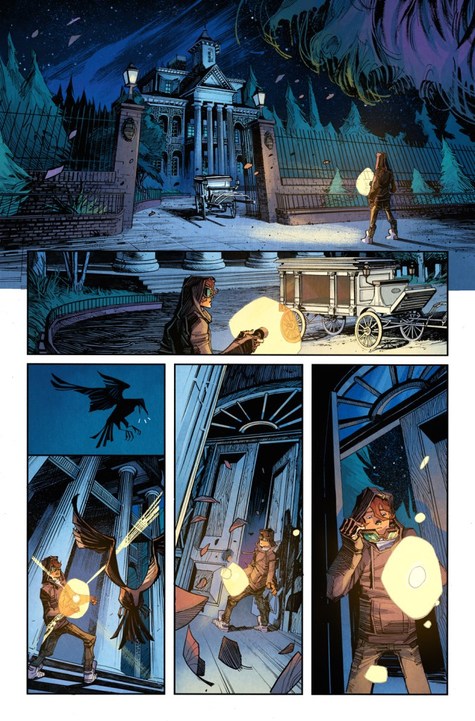 All this says nothing of the gruesome tales once conjured up for the Mansion’s backstory, most of which have been lost to history, but all of which were fair game for Marvel’s comic.

Original storylines accompanying the Haunted Mansion ride were far more disturbing than its current incarnation. There was a sea captain — Capt. Bartholomew Gore, to cite one of his early names — who was actually a notorious pirate. His young wife, on discovering this news, was murdered and bricked up in a wall in one version of the story, then thrown down a well in another.

Marvel’s comic makes reference to the pirate captain but also implies that the house belongs to Constance, the bride in the attic, or as she’s also known “the black widow bride” because of her penchant for killing her husbands. Though her face isn’t seen, her chilling presence hovers over the story. “At all costs,” one specter warns, “you do not want to run into Constance the bride.”

And to be completely fair, it isn’t at all too edgy for the youngsters – just edgy enough to keep us “adults” thoroughly entertained.  I have enjoyed reading them as well as tracking down the numerous variations of the complete series to date.  Based on how much work I put in to do this, Marvel has a non-super-hero success on its hands. 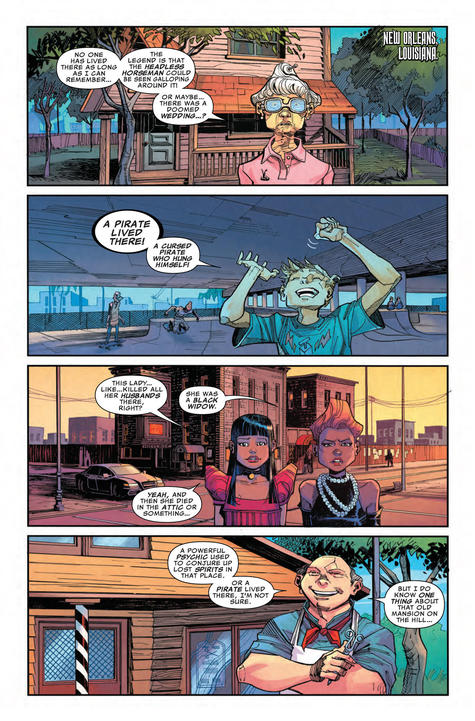 All told, The Haunted Mansion comics are a must-have for the collectible-comics fan as well as anyone with a hardcore passion for the delightfully unlivable abode in New Orleans Square, especially once the complete series is collected in trade paperback/hardcover form.

For now, issues 1-4 are available in with original covers as well as several variant covers.

Have you perused Marvel’s latest creation or are you a fan of the Haunted Mansion ride?  Tell us what you think by posting a comment or dropping a line to sue@blackgate.com.