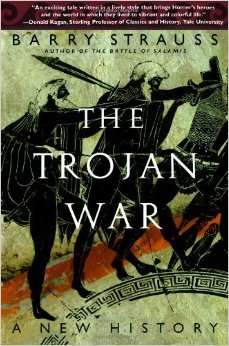 Imagine if the Trojan War happened pretty much as Homer described it? How would modern archaeology, scholarship, and our understanding of war help us understand the events of the Illiad?

Yes, on the face of it, Barry Strauss’s The Trojan War – A New History is an odd book. It’s a bit like John Morriss’s Age of Arthur, which took Nennius and Geoffrey of Monmouth more or less at their word, much to the derision of other Dark Age historians.

However, this isn’t a Dark Osprey flight of fantasy; Strauss is well aware that he’s doing a “just suppose” kind of history and he does make a good argument as to why we should at least consider Homer as more journalist than fabulist.

For a start, Homer was (probably) based on the coast of Asia Minor (modern-day Turkey was the home to many Greek colonies), and may have had access to local historical sources, including traditions reflecting the Trojan point of view.

The interventions of the gods mirror the rhetoric of numerous Middle Eastern inscriptions in which kings and Pharaohs do mighty deeds while the gods hold their hands in person. The Trojans and their allies also feel authentic to “Asia,” and the rhetoric and political landscape matches what we now know of the milieu.

Better yet, modern archaeology has found a much larger Troy — Schliemann only discovered the citadel  — and also uncovered a general collapse consistent with foreign invasion. Finally, recent finds have dissolved away Homer’s apparent anachronisms in military equipment.

So Homer could be true. Not as true as, say, Froissart, but truer than Malory. Think how Saving Private Ryan or The Longest Day treated the Normandy landings, and you have a sense of how accurate we’re talking about.

All that said and done, Strauss settles in to tell us the story as it might/could/probably/should have happened.

Stealing Helen is both a political act on the part of Paris and an example of proto-feminist social climbing on the part of Helen. Agamemnon’s Achaeans were a dangerously rising barbarian confederation. How better to undermine them than to run off with both the wife and the treasury of the High King’s brother? Meanwhile, for an ambitious and assertive woman, “Asia” offered more autonomy, more respect and better plumbing than muddy misogynist Sparta.

Strauss goes on to reconstruct the resulting campaign in plausible military terms; stalemate outside the walls, war coming to allied cities, camp fever and fevered campers.

And he answers questions such as:

And then we have the Trojan Horse.

It’s been interpreted away as everything from a symbol or allegory, through to siege equipment. However, Strauss convincingly argues that of all the stories in the Illiad, this one has to be true because it is so odd, so one-of-a-kind.

Well-written with enough illustrations to illuminate the text, this is a fun book that will make you think about how wars were fought, and what it might have been like. It will also make you want to go and visit the ruins for yourself…

[…] (2) DIFFERENT VIEW OF HOMER. M. Harold Page has an intriguing review at Black Gate: “Was Homer a Historian After All? A Look at The Trojan War: A New History”. […]

I’m not an historian, but my understanding is that Strauss’ book is not so much a history as a commentary on a literary tradition. That being said, and from what I understand it’s a fairly fun read, I wouldn’t make *any* historical claims based upon it. They should be seen as fun speculations, at best.

The wooden horse in the Odyssey is not totally random, though. It combines several elements of the culture at the time.
The Aegeans pretended to return home, in such a situation it was custom to give gifts to the gods to pray for a safe journey.
Poseidon was the god of the sea, but also the god of horses. A horse is a great motive for gift to pray for a safe sea journey.
It was custom to take trophies from defeated enemies and display them in the city of the victors in celebration. Since the Aegeans took their weapons with them, the horse would have been a good substitute to have at least something to display.

I personally doubt that they got soldiers into the city with the horse. Could just have been traitors or they could have sneaked inside in other ways. I don’t think the guards would have checked the identity of everyone coming in once it was safe again to open the gates to people having business in the city.
But to Greek audiences the story of the horse would probably sound very clever instead of ridiculous.

Yes the horse isn’t in Homer but is in the rst of the tradition. Yes, essentially the book is a commentary on the literary tradition – hence para three of my post.

As for the horse – hard to say. Even one man hidden within the city could have been enough…

Great post. There is a key phrase ‘Helen and all her possessions’ – so any wealth/land she had fell into the hands of the Trojans. Please she was the daughter of Zeus, which made her a demigoddess and hopefully guaranteed her husband/heirs a place on Olympus, or at least Heroic status.

There was more to the wars and the machinations than simply an unfaithful wife and devious gods. Politics and religion went hand in hand and as war is a continuation of politics there is social commentary – at least for us.