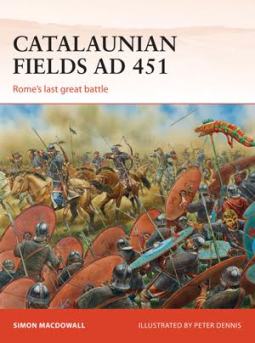 It’s the one thousand, five hundred and fifty sixth anniversary of the Battle of the  Catalaunian Fields, otherwise known as the Battle of Chalons!

Not heard of it?

AD451. Just as the Roman Empire fades into the Dark Ages. At the Catalaunian Fields near Chalons, a grudging alliance of Romans and Germannic tribes confronts Attila the Hun’s confederation of Huns and yet more Germannic tribes.

Hundreds of thousands of warriors grind through a Ragnarok-grade battle on the scale of Waterloo but fought with cold steel… a battle so murderous that, in the morning, nobody much feels like doing any more fighting.

I’m fascinated by this forgotten battle — I’m even writing a YA Historical series that will put the hero in the midst of the mayhem — so I was overjoyed to receive a review copy of Osprey’s new book, The Catalaunian Fields AD451. Imagine, then, how I felt when, I discovered the chapter called, “The Battlefield Today.”

What? OMG they found it!

The location of this battle has been hotly debated for centuries. Now here’s an Osprey book casually pinpointing the battlefield and using it as the basis for its maps and diagrams!

The author has plausibly located a site which fits the sources for the period, the place-name evidence, the military logic, and the geography. And — better yet — the area of the worst fighting, where the spilled blood reputedly made a river rise, is still called Le Enfer (trans: “Hell”), and the water that runs through it, la Riviere de Corps (I’ll let you guess the translation.)

And then we have the rest of the book.

Osprey have already visited this era. They have slightly weedy books on the Huns (*) and the Late Roman Army, and a meatier one on Germanic warriors(*). This well-illustrated volume, however, brings it all together in the kind of strategic and tactical pitfight that fires the imagination and has you downloading the marvelous Total War: Attila.

It also helps that the lively text makes good use of the sources and keeps flagging up the cool stuff; vivid snippets of old histories, stunning archaeological finds, and stirring moments, such as when an old general — Clint Eastwood-like — rides out of his villa to duel marauding Hunnish mercenaries from the army of General Aetius.

So we get what you’d expect: Osprey at its best with a good, readable history of the campaign and its context, biographies of the major players, a description of the armies and how they fought, very vivid and plausible reconstruction of the actual battle, and a good section on the aftermath.

The author makes good and lively use of the sources — including ones I personally hadn’t come across — and throws some light on some very dark places. To top it all, the illustrations bring out the shear mind-blowing scale of the what happened.

Read this book while listening to Turisas, or with the Gladiator soundtrack blaring out. (And, if you are Peter Jackson, please drop me an email. I have a project I’d like to pitch…)

My knowledge of history is pretty poor, but this was the battle between Attila the Hun and Flavius Aetius, yes? So, I’m a decided lightweight, but I thought Michael Curtis Ford did a pretty good job covering this in “Sword of Attila.” I was most amazed to learn that as a youth, Aetius was an “honor hostage” among the Huns, as Attila was among the Romans, prior to them meeting in the ultimate battle between the Roman Empire and the Huns. Incredible history 🙂

Osprey is a very neat company. I’ve got a couple Civil War-related titles from them.

Alright, this is pretty amazingly cool. I’ve always thought Tolkien picked the bones of the battle for the Battle of Pelennor Fields.

“I’ve always thought Tolkien picked the bones of the battle…”

Speaking of bones, I understand the combined fatalities from both sides to be in the hundreds of thousands. …There must be a LOT of bones buried somewhere.

Yes, Aetius’s life reads like a David Gemmel or Harold Lamb adventure. I think it’s Jordanes who puts the fatalities at 100K. However, if that represents a typical 10% (for a hard fought battle) that would give us one million men on the field, which seems unlikely. My bet is that it was the size of Waterloo, 100K men clashing and 10K casualties.

Looks like an awesome read. I recall watching a movie I think just called Atilla that pretty much covers the events leading to this battle.

Thanks for the clarification Mr Page 🙂

“I recall watching a movie I think just called Atilla that pretty much covers the events leading to this battle.”

I think I saw it as well. There was one unforgettable scene where Atilla is at a party in Rome thrown by a Senator. While talking with a literati, he spots a star athlete. He asks the man: “You allow an athlete to attend a party for Senators?”
The literati replies: “Even better: that athlete is paid a higher salary than our Senators.”

A look sweeps across Atilla’s face that says it all: Game Over 😉

Does this mean the next volume is coming soon? Because I’m dying to know what you do with the rest of Battle of Orleans.