David Marcum and I email each other. A lot! It is sort of a modern version of the HP Lovecraft – Robert E. Howard letter swapping. Without the gravitas. And the weirdness. And the literary importance. And the…oh, never mind. One Thursday afternoon in January of 2015, he sent me an email about a dream that he had had the previous night.

The dream (and the email) was about putting together a multi-author anthology of traditional Sherlock Holmes stories. As David typed, “There would be no weird Alternate Universe or present-day stuff, no Holmes-is-the-Ripper, nothing where Watson is at Holmes’s funeral or vice-versa. Etc. Essentially nothing that shockingly contradicts what is in the Canon.”

Earlier that morning, he had emailed Steve Emecz, his publisher at MX Books, about the idea. From that dream was born the MX Book of New Sherlock Holmes Stories. Except more authors signed on and it grew to two books: then to three. Then came another volume in 2016. And a fifth, containing only Christmas stories, and a sixth, are on their way! In fact, I should be finishing my Christmas tale right now, not writing this post.

The four volumes have contained ten introductions/forewords/essays, five poems and over eighty new stories. That’s EIGHTY Holmes short stories (including a couple of plays) making their first book appearances in this series. I read Holmes stories at a pretty heavy pace and I’m still working my way through these volumes.

And every single author participating has donated their royalties to the restoration of Sir Arthur Conan Doyle’s former home, Undershaw, which, when completed, will be a part of Stepping Stones, a school for children with learning disabilities. As my sister Carolyn is severely mentally retarded, I can appreciate the generosity of every one of my fellow authors. Actions like this matter. 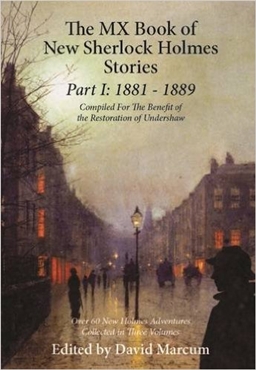 I can’t comment on every story in each volume. But I would like to mention a few. The authors had only one story across the first three volumes, but several returned for Volume IV (and some will be back for V and VI as well).

John Hall – “The Adventure of the Slipshod Charlady”
When I began collecting Holmes pastiches (stories by authors other than Conan Doyle), Breese Books was one of the few imprints I could find at my local bookstore. And John Hall (along with Val Andrews) was one of the first authors I began collecting. So I was quite pleased to see him pen the very first story in the series.

Summer Perkins – “The Deadly Soldier”
This story tells of how Colonel Moran came to work for Professor Moriarty. There’s no Holmes at all, but it’s an interesting revelation of something I had never really thought about before.

Will Thomas – “The Adventure of Urquhart Manse”
Thomas’ novels of Barker and Llewelyn constitute one of my favorite Victorian Era detective series. Perhaps some day he’ll add some short stories to the Barker Canon. Here, we get a Holmes pastiche with a bit of a Hammer Films feel to it.

Vincent W. Wright – “The Adventure of the Bookshop Owner”
Wright is a bit of a rising star in the Midwestern Holmes community, as his name is appearing more and more often at events and in publications. This story is a classic case of ‘all is not as it seems.’ Vincent’s Holmes pedigree has an Achilles heel in that he isn’t much of a Solar Pons fan, but I’m working on fixing that…

Bill Crider – “The Case of the Anarchist’s Bomb”
Bill is one of my favorite writers of Westerns. And he’s a John D. MacDonald aficionado to boot! Dr. Watson goes to work for Mycroft in this tale, and it speculates a bit about Holmes’ whereabouts during the Great Hiatus.

Bert Coules – “The Saviour of Cripplegate Square”
This radio play was from The Further Adventures of Sherlock Holmes, the superb series starring Clive Merrison. When I write Holmes, it is Merrison’s voice that I hear. Coules did a fantastic job with the series. 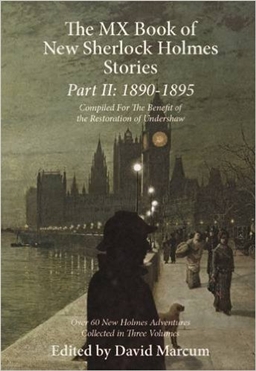 Paul Gilbert – “The Adventure of the Regular Passenger”

Gilbert is another author I quite enjoy and I wish his publisher would find a way to make copies of his books more affordable (ebooks have helped in this regard). In this story, he expounds on the peculiar persecution of John Vincent Harden, the well known tobacco millionaire.

Leslie F.E. Coombs – “The Royal Arsenal Affair”
As I read this, I pictured Basil Rathbone, but with a competent Watson (not Nigel Bruce, obviously). I liked that ‘Universal Films’ feel.

Larry Millett – “The Opera Thief”
I am an unabashed fan of Millett’s Shadwell Rafferty tales, which bring Sherlock Holmes to America (Minnesota, to be more precise). I recommend all five novels. So I was happy to see a new ‘Holmes in Minnesota’ short story in this collection.

It’s Elementary – My own “The Adventure of the Parson’s Son” is in this volume. I am much more adept at non-fiction Holmes (and Solar Pons), but I do think that this is my best pastiche so far. I drop Holmes into the George Edalji affair, which Sir Arthur Conan Doyle had a significant part of here in the real world. Which I’m sure you read about here at Black Gate, right?

Hugh Ashton – “The Adventure of John Vincent Harden”
Ask me to pick my favorite current Holmes writer who “has Doyle down,” and I’ll probably tell you it’s Hugh Ashton. His Holmes short stories are as authentic as anything anybody else is writing these days. Here, he tackles one of Watson’s famous ‘untold cases.’ 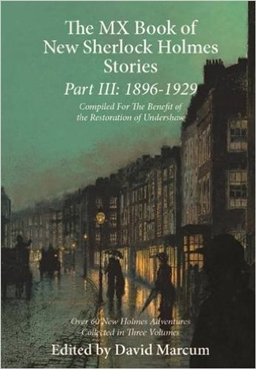 Denis O. Smith – “The Watcher in the Woods”
I also think that Smith, who has been writing Holmes pastiches for about twenty years (at least) is another writer who is pretty much unequalled in matching Doyle’s tone and writing style. His pastiches are among the best I have come across. His “Adventure of the Inn on the Marsh” (from Volume I) has a Hercule Poirot feel to it.

Mark Mower – “The Case of the Rondel Dagger”
There are many friends and favorite authors (some are even both!) in these MX Anthologies. But it’s also been a pleasant experience to come across fine stories by writers I was either not familiar with or hadn’t read before (such as the aforementioned Summer Perkins). Mower’s story is one of my favorites among those.

The covers are quite attractive and were done by Bob Gibson, who passed away during preparation of the fourth volume. His style will be missed in future books.

I’m a fast reader, myself. With these books there are a lot of words on the page (probably between 400 and 450-ish in my hardback editions). Let’s say it takes two minutes to read one page. For Volume III, excluding the Introductions – just reading the poems, plays and stories, that comes out to about 12 hours of Holmes entertainment. And with four volumes, these anthologies will provide you with about 48 hours of reading!

There are many, many more stories worth reading in this series, including authors with well-established reputations, and others you might not be familiar with. And there are Sherlockians from all over the globe. Volume IV has definitely been my favorite so far and I’d suggest starting with that one. But I think any and all of the books in this series would be fine additions to your Holmes library.

Since there are more books coming, you’d be wise not to fall too far behind here in the early stages of the project. You might not be able to catch up!

[…] Today over at BlackGate.com, I talk about this very cool series, which has already exceeded eighty stories. That’s a LOT of Holmes reading for you.  Head on over and learn about the MX Anthologies. And please feel free to leave a comment. […]

While I’m very much a traditionalist regarding Holmes stories, I’m not above mixing things up a bit. Which is why I’ll eventually write a Holmes-Solar Pons vs. Cthulhu pastiche.

But I’m totally behind David in keeping these stories in the vein of those ACD wrote. No making Holmes socially PC for today’s culture. Or turning Mary Watson into an ex-CIA assassin.

These are the kinds of stories that ACD could have written.

Bob, terrific post (as usual). I have all four books, have read just the first (so many books and all that), and it took me much longer to read as I’m not the quick reader you are. If I read nothing else it would take me a week or two per book, but there are other collections, SF-F, novels, gardening, so much else to fill the days and evenings. Thank goodness I’m retired.

I’m delighted the series of New Sherlock Holmes stories is continuing, and I’ll be participating in the process with my pledge on an ongoing basis. And thanks for the tips on Hugh Ashton and Denis Smith.

Thanks R.K. – I had a bit of free time from ‘dad duty’ over the past couple weeks and I read volume IV, then started in on III. There are a few I didn’t really care for in each volume, but overall, there is just such an abundance of quality stories.

Volume V will probably be out before I read all of I and II!

I’m a big fan of the ‘Holmes for the Holidays’ anthology (and to a lesser extent, the follow-up), and I’m excited to see a new book of Christmas tales coming out as the next MX book. Great idea from David.

I think over half of the stories for the 2017 volume are already to the editor: the authors are still very excited about this series and I have no doubt the quality stories will be coming for quite awhile.

If you get a chance, download one of Hugh’s very affordable ebook collections to check him out. He really is putting out top flight Holmes stories. I think I have all but his latest book on my Kindle.

I mentioned ‘Holmes For the Holidays,’ which is an anthology I pull off the shelf almost every Christmas.

Here’s a Holmes for Christmas post I did here at BG back in 2014.