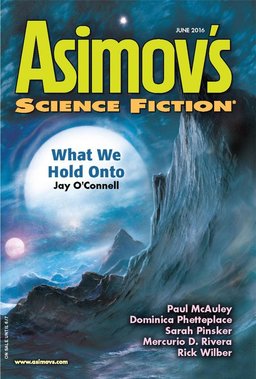 The June issue of Asimov’s Science Fiction contains “What We Hold Onto,” a huge novella from Jay O’Connell, “Rats Dream of the Future” by Black Gate alum Paul McAuley, and a short story by Sarah Pinsker — who just won a Nebula for her short story in last year’s June Asimov’s, “Our Lady of the Open Road.” All that plus stories by Dominica Phetteplace, Mercurio D. Rivera, and Rick Wilber, and lots more. Here’s the full description from the website:

Jay O’Connell’s giant June 2016 novella takes an exquisite look at “What We Hold Onto” as well as what we are capable of letting can go. This story brilliantly imagines the future in robust details. With her marriage over and her mother dying, Sophia’s life is falling apart. To cope with the chaos, she hires a “Simplifier” and changes her life in ways she’s never anticipated. You won’t want to miss this remarkably inventive tale!

Paul McAuley envisions terrifying consequences when “Rats Dream of the Future”; as she is “Unreeled” back to reality, Mercurio D. Rivera’s astronaut may or may not be changed by her mission to a black hole; join Sarah Pinsker for a charming off-season visit to an Orchid Beach souvenir shop that has unusual post cards and tchotchke on sale in “Clearance”; Rick Wilber introduces us to a “Rambunctious” and unforgettable character; and this time, Bel speaks for herself as she explains what it’s like to live with a watcher in Dominica Phetteplace’s“Project Symmetry.”

In “My Trip to the Future,” June’s Reflections column, the intrepid Robert Silverberg muses on a brave new world; James Patrick Kelly’s On the Net reveals why “There’s Something About Mars”; Norman Spinrad’s On Books analyzes novels by David Walton, Ted Kosmatka, and Kim Stanley Robinson that could be all called “Very Hard Science Fiction”; plus we’ll have an array of poetry and other features you’re sure to enjoy. Look for our June issue on sale at newsstands on May 3, 2016.

“What We Hold Onto,” by Jay O’Connell
I needed help.
Even though I’m not that kind of woman. I don’t do personal trainers, life coaches, social media consultants, masseuses or pedicures.
But when it came to Mom… well. I was out of my depth. With Michael out of the picture, the boys at school on the West Coast, and the ParaSoft antitrust suit heating up, I didn’t feel like I had a choice. So I found a contractor on TaskMaster. A Simplifier. A Nomad.

“Project Symmetry” by Dominica Phetteplace
Dear Diary,
Today I was very surprised to find out that there was an AI implanted in my head. At that very moment, I just happened to be holding a document entitled “How to Kill Your Watcher Chip.” That’s when the lights went out.
I was alone in my dorm room, or so I thought. Everything went dark, and then a projection began to play on the north wall. It was a movie of me at ten years old, at my first dance recital.

Editorial: Behind the Scenes, by Sheila Williams
This month’s editorial will introduce you to some of the people who make Asimov’s a monthly reality. The editor of a science fiction magazine has a very public face. I’m the one who attends the conventions, meets with authors, and writes the editorials. It would be easy to assume that I’m the only one working on Asimov’s. Of course, that is far, far from the truth.

Reflections: My Trip to the Future, by Robert Silverberg
I used to be a cutting-edge sort of guy, the sort who likes to fill his life with the newest and most interesting gadgets. I had a VCR when they were considered wildly futuristic. (They are so non-futuristic now that many of you probably don’t know what VCRs were. Well, Google it.) Before that, I had a pocket tape recorder to serve as a notebook for story ideas as I moved about. I had one of the earliest Sony Walkmans. (Another forgotten gadget.) I went shopping for my first computer in 1978.

On the Net, by Norman Spinrad
unMars
There is something about Mars that has compelled the attention of science fiction since our genre’s earliest days at the turn of the nineteenth century. Perhaps our obsession is Percival Lowell’s fault.

The June issue went on sale May 3. It will be on sale until June 7.

We last covered Asimov’s SF with the April-May 2016 issue.