I was surprised and deeply saddened on May 14th to learn of the death from cancer of comic artist and writer Darwyn Cooke, at the much too early age of 53.

Over the past decade, I have gradually lost most of my interest in current comics, especially ones from DC and Marvel that deal with long established characters; the medium (always with some honorable exceptions, of course) has largely grown too violent, too jaded, too self aware and self indulgent to produce much work that engages me.

The shock for shock’s sake taboo breaking, the endless restarts and reboots, the universe-altering big events that promise to “change everything” — they all long ago began to merge together into one dull blur, like an old chalkboard that has been written on and erased too many times. How often can you really “change everything” before you are in danger of eradicating the ties of memory and affection and shared history that connect a medium and its audience? That’s what happened with me, anyway. What the hell — maybe I’m just getting old.

There are exceptions though, as I mentioned, and Darwyn Cooke was one of them. I was always eager to see anything he produced; when a new Cooke was in my hands, I felt as young as I did the day I bought my first comic book (House of Mystery 175, July-August, 1968).

I could go on and on about his gorgeous art, but I won’t; if you’re at all susceptible to the charms of the four color world, you know at one glance that you’re in the presence of a master, and in this context at least, a picture is truly worth a thousand words. Just find a Darwyn Cooke story and marvel at the dynamic beauty and storytelling skill that leap from the pages.

Wonderful as those pages look, it is the perfect unity Cooke achieved in blending his art and his writing that marks him as one of the finest comic creators since Will Eisner himself. (Which made him the perfect choice to continue Eisner’s greatest creation, The Spirit, as he did for a dozen issues from 2006 to 2008.)

Cooke’s work was solidly grounded in the long history of his chosen form, but it always avoided being a slavish imitation or a lifeless homage. His vision was his own, unique and unmistakable. He did not deny the real darkness and corruption in the world, but he still believed in hope and heroism, and in ideals that are worth fighting for. Without sticking his head in the sand or being locked into an ossified nostalgia, he managed to convey the freshness and energy and optimism of the great silver age comics of the 50’s and 60’s. He was one of the few people working in the medium who really seemed to know what comics are for. 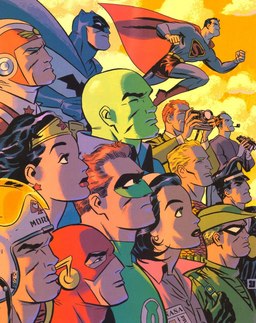 His work will live on, especially his four superb adaptations of the razor-edged noir Parker crime novels that Donald Westlake wrote under the name Richard Stark, his propulsive Catwoman story, Selina’s Big Score, and above all his masterpiece, The New Frontier, one of the finest series of the past few decades, a work that is breathtaking in its visual beauty and thrilling in the intricacy and resonance of its story. (It is, among other things, a silver age comic geek’s paradise.)

The New Frontier takes characters we thought we knew and gives them to us with a startling freshness; it puts Cooke’s childhood icons in unprecedented situations and confronts them with unexpected dilemmas, and it does it without ever violating them for the sake of passing novelty or a cheap effect. In Cooke’s sure hands, Superman, Batman, Wonder Woman and the rest are the characters we always knew, only reinvigorated and refreshed, and able to easily bear the weight of a new seriousness.

Darwyn Cooke could do all this because he understood something that Frank Miller has long forgotten and that Zack Snyder never knew – the classic characters he loved so much didn’t belong to him. He just had them in trust for a short time (all too short, damn it), and yes, he had a responsibility to do something new with them, but he also had a responsibility to pass them along with the essence of what they are preserved, and with the qualities that made us love them in the first place intact and unviolated.

I never met Darwyn Cooke, but of this I’m certain – he would never have depicted Superman killing anyone, no matter how much money they dangled in front of him. He would have gotten up and walked out of the room, because he knew what he owed to that character and to all the other creators who spent their lives laboring to make him the greatest hero of all.

Darwyn Cooke is gone from us too soon, but in his time with us he managed to unforgettably depict heroes who, while not perfect, actually stood for heroism. In a time of disillusionment and easy cynicism, that was itself a brave thing to do. Along with the timeless characters he brought to life, Darwyn Cooke was a kind of hero. Now, true to his trust, he has passed those icons of truth and justice and courage on, still true, still worthy. God bless him.

Thomas Parker’s last article for us was Shut Up, You Freak!!

I knew Mr. Cooke only through his excellent work on Parker and Catwoman, but I had fully planned on reading his work for many years to come. I’m deeply saddened to learn of the death of such a talented artist and gifted storyteller.