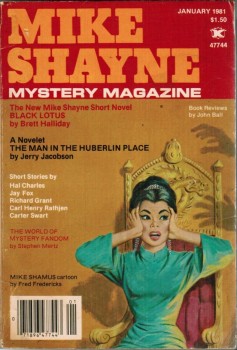 “Black Lotus” was the cover story of the January 1981 issue and opens with a terrified Shepard Wong (a reference to What’s Up, Tiger Lily? as Will Murray noted) writing a letter to Mike Shayne requesting his help as he believes his life is in jeopardy. Before he can finish the letter, a ninja breaks into his apartment and murders him. The police discover the letter and send for Shayne who is outraged at the ferocity displayed in dismembering Wong’s corpse.  Shayne visits The Crimson Pagoda, a Chinese restaurant where Wong worked. The manager, Leon Ho is cooperative and lends one of the hostesses, Leiko Smith to act as a translator as Shayne interviews Wong’s friends and co-workers. Returning to the scene of the crime, they run into Miami mobsters who nearly finish Shayne except for Leiko’s unexpected display of martial arts expertise. Mike applies heat to mob boss, Jerry Killian suspecting he may have killed Wong over unpaid gambling debts. Returning home, Mike is nearly killed by the ninja assassin. The shock ending, of course, is that the Crimson Pagoda is run by the Black Lotus tong and Leiko is the Black Lotus herself. There is a bloody shootout with the Killian gang who are in a turf war with the tong. Mike is the lone survivor until he discovers Black Lotus has escaped. 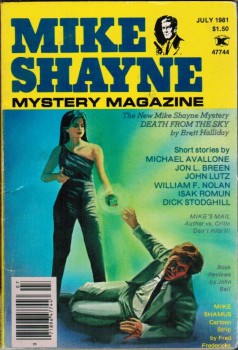 The second story, “Death from the Sky” was the cover story of the July 1981 issue. The action gets underway with Mike taking a case from a UFO crank, Jim Ed Haney who is paranoid someone is trying to kill him because of what he knows about UFOs. Of course, as soon as Mike arrives at Jim Ed’s houseboat at the marina, he finds him dead, gets sapped, and awakens to meet Jim Ed’s daughter who accuses him of murdering her father just as the police arrive at the crime scene. After clearing things up and doing some snooping, Mike discovers a shuriken and realizes the Black Lotus tong are involved. He locates Leiko Smith (and learns her birth name was Leiko Gordon – a possible Robert E Howard reference to John Gordon from the1929 Rohmer-esque novella, “Skull-Face”) operating a massage parlor run by the tong. Shayne and the Black Lotus are soon embroiled in a race to recover a downed Russian satellite (the UFO that Jim Ed believed he saw). The finale sees the KGB, the CIA, the tong, and Shayne converging with the expected bloody shootout. This time it is the Black Lotus who wins and recovers the satellite. There is a nice tag ending with the CIA passing intelligence to Mike that Leiko has entered a private clinic in Switzerland for treatment of the radiation sickness she is suffering from after retrieving the Russian satellite. 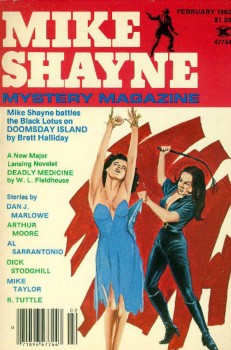 The grand finale, “Doomsday Island” was the cover story of the February 1982 issue. The story opens at a four-star hotel in West Germany where Rudi Wolff and his lover, Anna Ulmer are on the run for their lives and hours away from a safehouse provided by the American government when they are hunted down and killed by East German assassins. Rather than political asylum as it appears, Wolff and Ulmer are on the run from the Swiss clinic where they learned too much. Mike becomes embroiled in a case that takes him to the island resort of San Marigal which, naturally enough, is where the CIA is converging because of security concerns over a political conference. It is also where the Black Lotus tong and Dr. Podbillion, the unhinged director of the private clinic in Switzerland have gathered to launch a missile that will spread bacterial  warfare around the world. The similarities to Ian Fleming’s On Her Majesty’s Secret Service (1963) are hardly coincidental.

We learn Leiko plans to use Podbillion’s plot to pave the way for the return of her grandfather to the world political stage. Both parties naturally seek to double-cross the other and hope to use Mike as the instrument of their betrayal. There is a nice bit with Mike befriending the villagers of Malogrado who want nothing more than to rid San Marigal of these foreign devils. There is also a wonderfully old-fashioned sequence where Mike’s girl Friday, Lucy Hamilton nearly ends up a pagan sacrifice presided over by Leiko (who also gets to flog her in a bondage scene that will likely amuse readers of Robert E. Howard’s “The Slithering Shadow”). It all rushes headlong to a typical Bondian climax. Grandfather never puts in an appearance, but in a twist ending that is straight out of Sax Rohmer – once all the bodies are accounted for, the CIA realizes Leiko is missing. Michael Shayne is not at all surprised by this and neither should readers of these very traditional detective thrillers that seek to pay tribute to much of the genre fiction that came before them. By the 1980s, Michael Shayne may have strayed from his roots on occasion, but he always remained in familiar territory.

I missed this entry first time around. I fell over when I saw the first Mike Shayne cover which was also used the cover the first issue of Charlie Chan Mystery Magazine which lasted four issues back in the 70s I think. Galactic Central would have them posted.