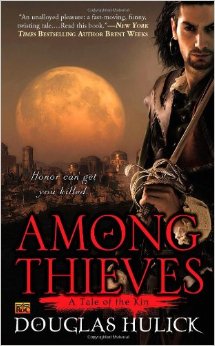 Fantasy has a wide range of heroic archetypes, from the classic sword-wielding warrior to the wand-waving wizard, but I’ve always been fond of the characters that have at least a touch of the rogue in them. I’m pretty sure that over my decades of roleplaying, the number of characters I’ve played who could pick a lock probably outweighed those who could kick down the door by a factor of about two. From Aladdin to Bilbo, heroes that rely on skill, cleverness, and deftness over brute force have always appealed to me.

Despite that, though, I’ve rarely been drawn to stories explicitly about the criminal underworld, whether it be in fantasy or real-world fiction like The Godfather or The Sopranos. Fights over which particular thief or murderer can get the upper hand over his rival thieves and murderers have never captivated me that strongly.

That’s part of the reason why I was so surprised with how much I loved Among Thieves (Amazon), the first book in the A Tale of the Kin series of fantasy by Douglas Hulick.

“The Kin” from the series title is the underground criminal society of Hulick’s world, and it’s this rich and vibrant society that he has built that drew me in as much as anything else about the story. This isn’t a story about just some criminals having adventures, but about a people who, as a society, are as thoroughly developed as most cultures that an author has developed for their fantasy series. And, of course, as a criminal underworld, there’s also a larger society in which they exist and operate, and that society is itself fully realized.

The series focuses on Drothe, a “nose” who gathers information on the street and sends it back to his employer, one of the street-level bosses within the Kin. He’s more than that, of course, as we find out soon enough. The reader is introduced to Drothe as he is overseeing a round of torture, all so that he can get the information he needs, regarding a lost religious relic. To have reached this point, things are already going poorly for Drothe, and the novel follows the escalation of his calamities, as he finds himself in the middle of a growing war between Gray Princes, enigmatic and near-legendary figures who lead the Kin from the shadows of the world, and also puts him at odds with the protectors of the god-like triumvirate of Emperors that officially rule his land.

The resolution of the first novel, though satisfyingly complete in its own right, sets the stage for the second book in the series, Sworn in Steel (Amazon), which sees Drothe forced to travel (flee?) to a neighboring empire, an Arabian-inspired land called the Despotate of Djan. There he searches for allies to help him resolve the trouble that he’s gotten into and hopefully stay a step or two ahead of his enemies, but only if he can prevent getting killed by the new enemies that he’s making along the way.

The world is richly detailed, complex, and enjoyable to read about. Though the narrative is in part driven by Drothe getting himself in deeper and deeper trouble, at no point is this because he is a fool. The character continually makes the best decisions he can given the information he has … it just happens that those best decisions escalate situations that he was hoping to tame. 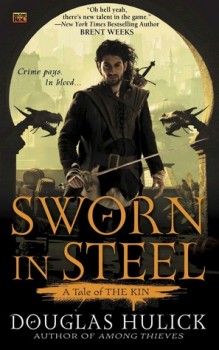 The language of the books is also smooth and clever, from the general witty dialogue and humor to the seamless integration of a thieves’ cant that can almost always be understood within context without distraction by the reader. Though Drothe himself has little direct magical ability, the various magical systems within the book (and I count at least three distinct ones showing up in these two books so far) are detailed enough to be engaging without getting weighed down with explanations of how they work.

In general, that’s part of what is so enjoyable about Hulick’s writing style. There is a ton going on behind the scenes and under the surface of these books, and there’s no doubt when reading it that he explicitly knows all of it, but what he places on the page itself is with such a deft hand, just subtle enough to reveal that it’s there without giving away too much of the backstory, no more than we need to know at a given moment.

Having read the first two books in the series, I’m eagerly anticipating the third book … which is about the best testimonial that a reader can give.

Yes, my only complaint about the series is that I don’t have a third book in front of me yet.