NOTE: The following article was first published on May 2, 2010. Thank you to John O’Neill for agreeing to reprint these early articles, so they are archived at Black Gate which has been my home for over 5 years and 260 articles now. Thank you to Deuce Richardson without whom I never would have found my way. Minor editorial changes have been made in some cases to the original text. 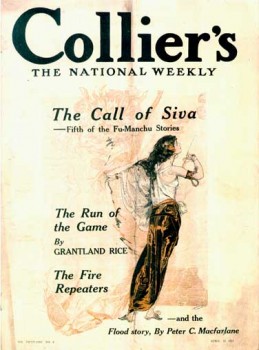 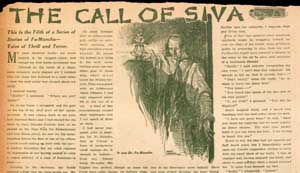 “The Call of Siva” was the fifth installment of Sax Rohmer’s serial, Fu-Manchu first published in The Story-Teller in February 1913. The story would later comprise Chapters 13-15 of the novel, The Mystery of Dr. Fu-Manchu (initially re-titled The Insidious Dr. Fu-Manchu for its U.S. publication). Rohmer had built several of his Fu-Manchu stories on protracted paranoia and had previously made good use of a Limehouse opium den as a setting, but “The Call of Siva” sees him letting his plotline be dictated by the altered state of the waking dreamer for the first time and to great effect.

The story opens with our narrator, Dr. Petrie relating a strange dream which begins with him writhing on the floor in agony. Rohmer makes good use of Stygian darkness, Oriental tapestries, and Mohammedan paradise as suggestive imagery that Petrie’s queer dream, at once both mystifying and terrifying, is uniquely Eastern in origin. This point is confirmed as Petrie awakens with Nayland Smith as his cell mate. Only at this point does Rohmer resume something approaching a conventional narrative with Petrie’s murky recollection of he and Smith rushing to warn Graham Guthrie that he has been marked for assassination when they are abducted by unseen assailants from a passing limousine.

Dr. Fu-Manchu makes his first major appearance in this story. His confrontation with Petrie and Smith in their cells is one of the highlights of the initial series of stories. While the previous month’s story gave the reader every reason to place Fu-Manchu in the context of the contemporaneous fears of a Yellow Peril; when the Devil Doctor finally takes center stage, Rohmer has him invoke a god of Chinese antiquity and likens him to an Aztec priest. Rohmer seems to have enjoyed pandering to the political rhetoric of the day before confounding his readers’ expectations by removing Fu-Manchu from any temporal or geographic constraints. This conceit makes the character even more menacing as he mixes Arabian Nights fantasy with real-life torture devices such as the wire jacket.

Rohmer draws a direct connection with one of his strongest influences in giving Fu-Manchu a pet marmoset to perch on his shoulder just as Guy Boothby’s Dr. Nikola (and later Ian Fleming’s Ernst Stavro Blofeld) had his ever-present pet cat to stroke while plotting some new atrocity. The chosen method of eliminating Graham Guthrie is the Call of Siva of the story’s title. Fu-Manchu knowingly references Rangoon 1908 to Nayland Smith, aware that he will recall the ghastly particulars of this cryptic remark. Once again, Fu-Manchu’s anonymous Egyptian slave girl liberates our heroes and, in doing so, helps prevent the assassination of Graham Guthrie. 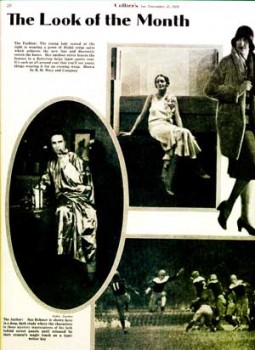 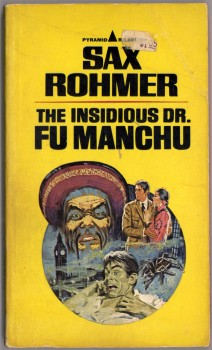 Rohmer makes much of the Call of Siva, the Mark of Kali, and the presence of phansigars and thuggees in contemporary London in this story. This is where he begins to expand the secret society that Dr. Fu-Manchu serves from not merely a Chinese organization, but a conglomeration of Eastern groups banded together to serve a common purpose in dismantling the British Empire. In fairness to Rohmer, this is exactly what Nayland Smith tells Petrie at the start of “The Zayat Kiss,” but it has taken the author several installments in the series before he fully demonstrates the concept.

It is tempting to view this as yet unnamed secret society in a positive light, for they are only defending themselves against Western imperialism run amok. Given Rohmer’s penchant for the exotic and foreign, it is likely that he did feel the British Empire had stretched too far. There is often a mocking quality in Nayland Smith’s jingoistic dialogue. What strikes the modern reader as politically incorrect invariably springs from Smith’s mouth and not Petrie for it is Smith who is the colonial administrator for the Crown in Burma. Upon reflection, “The Call of Siva” was already heeded many years before by Rohmer, then by his characters, and finally by his now loyal readers who eagerly awaited each month’s installment of the serial.

Events are beginning to move to ahead as Smith and Petrie draw ever closer to Fu-Manchu’s path. One side must win with the reader unable to determine at this stage if the author has invested enough sympathy in the nameless slave girl to spare her falling victim to her master’s wrath or if she will help tip the scales in our heroes’ favor. The wheels are now set irrevocably in motion. Rohmer had already proven himself a master of alternately following and defying tradition, the reader would be kept guessing to the outcome as the suspense builds toward a fiery climax.