Galaxy’s April, 1953 issue includes a story by fellow Hoosier, Kurt Vonnegut, Jr. I hadn’t read any of his work previously. Gasp! So I was excited to find something of his within Galaxy.

“Made in U.S.A.” by J. T. M’Intosh — Roderick began a divorce trial with his newlywed wife, Alison. The couple had been in love, but when Roderick found out she was an android, he wanted to end the marriage. Though androids are identical to humans in many ways, they lack the ability to produce children. As to why Alison withheld the truth of who she was, it was within the statutes of the law — androids have equal status in society. 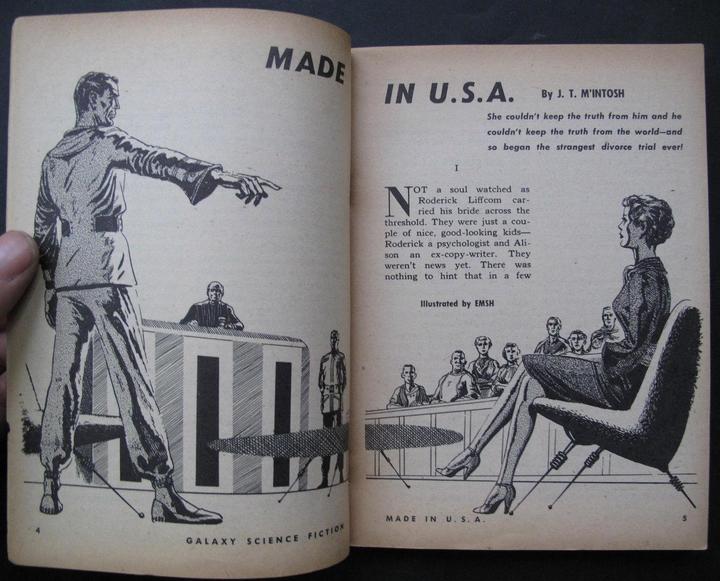 The beginning and ending worked well together. I really felt something — an attachment to the characters, especially Alison, who’s struggling with her identity and trying to reconcile with the man she loves. I could see how some might see it as a bit sappy; if it is, then I guess I’m a sap.

“Seventh Victim” by Robert Sheckley — Murder is legal — if you sign up to participate in it. If you register, you must play two roles — first as a Hunter, second as a Victim. Hunters are given information about their Victims so they can find them. But the Victims can defend themselves and kill the Hunters. Frelaine begins pursuit of his seventh Victim — a woman who seems to have no defense and simply awaits the Hunter. 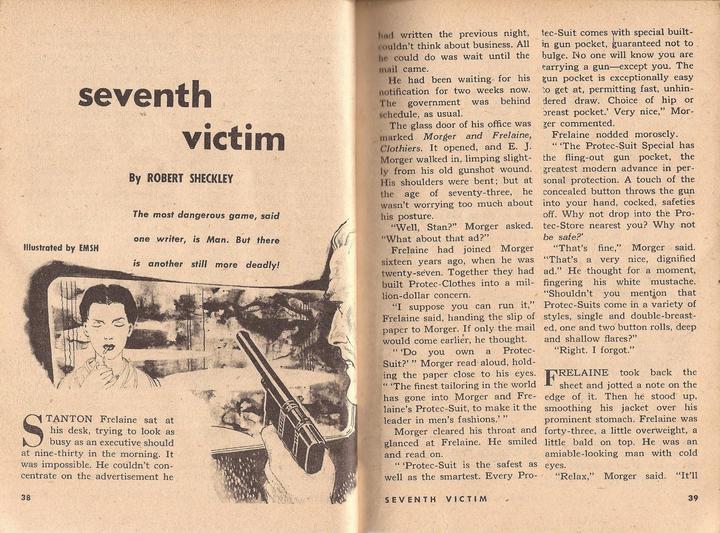 It’s an interesting premise, and I was a bit surprised (in a good way) by where the story went.

“University” by Peter Phillips — A six-man crew argue aboard the Boomerang, which is outside the Solar System. To assuage their anger, the men drink alcohol. They come to a stop at a place resembling ancient Greece — with aliens who are far more advanced than they are. 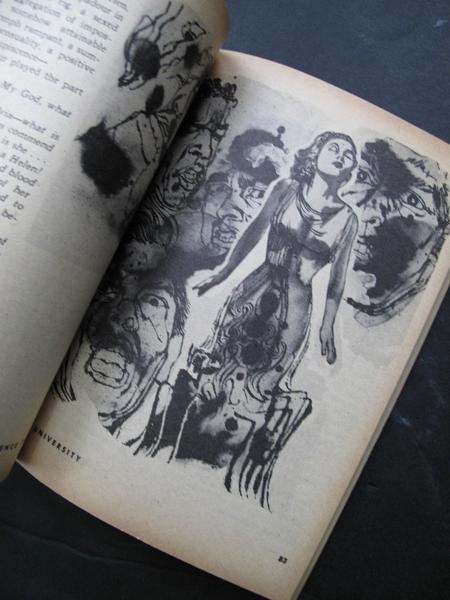 I really had a difficult time connecting with this story. At the point that they encounter the aliens, I was just lost for a while. But even once I understood what was happening, I never felt in sync with the plot. Peter Phillips had many stories published in the 1940’s and 1950’s, but he supposedly retired from writing after his last story was published in 1958. And he didn’t appear to take up writing again for the rest of his life; he died in 2012. 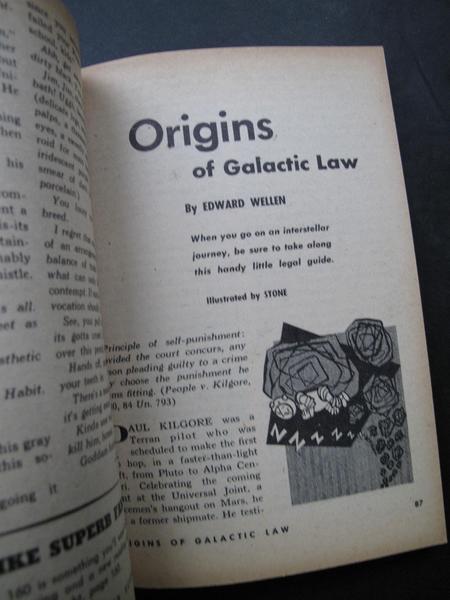 “Origins of Galactic Law” by Edward Wellen — This is another series of anecdotes, akin to what Wellen did in the July, 1952 issue. These share a theme of galactic law.

My reactions to these ranged from smirks to small chuckles. You could make these into Facebook snippets in today’s world, and I think people would find them amusing in that medium. 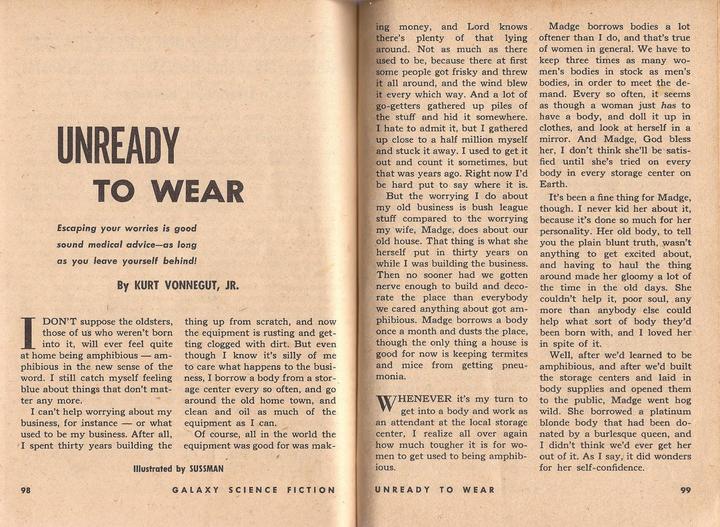 “Unready to Wear” by Kurt Vonnegut, Jr. — Some people, known as amphibians, have learned how to separate their spirits from their bodies, allowing them to live without the concern for physical needs and discomfort. They still have bodies they store and take care of, though not their original bodies. But other humans find the practice completely wrong and view the amphibians as their enemies.

I like the matter-of-fact style of the first-person narration. And I think there are some interesting points about how much our physical bodies create issues for us in relating to each other kindly; for example, how upset can we become simply out of fatigue, hunger, or becoming to hot?

“The Sentimentalists” by Murray Leinster — Newlywed aliens arrive on a distant world so that the male can observe a phenomena with the system’s star. Both of them also observe humans on one of the inner planets.

Lon Simpson finds himself in an impossible situation. He came to Cetis Gamma Two to make a living farming thanar leaves. And though there are laws in place to allow people to make their own way, a crooked trading company finds ways to subdue people like Lon, such as selling faulty equipment that costs so much to maintain that there are no profits left. Fortunately for Lon, the alien newlyweds take an interest in him and intervene on his behalf.

Matthew Wuertz’s last retro review for us was the April 1941 issue of Unknown.

I assume that Sheckley’s 7th Victim inhabits the same world as his novel The Tenth Victim. That novel features a woman who is about to kill her 10th victim, using her a specially adapted brassiere. Suffice it to say that it is not one of Sheckley’s best. A film was made of it with Ursula Andress which should also probably be avoided. Neil

Love the Schomberg cover.
Could you doubt that there was Science in the science fiction stories in this magazine?

And THAT, youngsters, that right there is what a Space Ship looks like.

“Seventh Victim” was indeed the source material from which Sheckley grew the (indeed much inferior) novel THE TENTH VICTIM. I am not sure whether the movie came first and the impetus to make it a novel was to have something to pair with the movie, or whether he expanded the story to a novel after which it became a movie, or what …

The cover — a Thanksgiving turkey under glass?

NeilH and Rich – The protagonist is trying to get into the Tens Club – a feat accomplished by successfully being the Hunter and Victim 10 times – meaning you’ve killed 20 people.

There’s a lot that could be done within this premise. But it sounds like the book didn’t stand up too well.

Major Wootton – I see it!

Wikipedia says Sheckley’s novel THE 10th VICTIM was based on the film … both appeared in 1965 (the novel in December), so that seems plausible.

I had forgotten that much later Sheckley wrote two sequel novels (VICTIM PRIME and HUNTER/VICTIM). I haven’t read either of them.

This issue is an improvement over March, but not a huge one. Murray Leinster saves the day with the final story.

I also read the October 1932 issue of Railroad Stories this month and enjoyed it very much. I will try not to get the two magazine mixed up.

I normally love J. T. M’Intosh’s work, but “Made in the USA” was a snooze. It is way too long for the simple premise and the events that run the story, which are few. A woman is on trial for not disclosing that she is an android to her husband before they got married. She is not compelled to do so by law, but the fact that she cannot have kids is the real issue. OK so we have an story of acceptance and tolerance in a speculative setting, which runs way too long and ends predictably without any real surprises or twists. This is not a great start.

I enjoyed “Seventh Victim” even if it was a bit predictable. Stanton Frelaine is ready to kill his next victim, in hopes of working his way towards the elite “Tens” club. His victim, surprisingly, is a beautiful woman, who has plans of her own.

The system of planned murder is explained as a means of letting men (mostly) act out their aggressions without starting a full-scale war. If this piece was published today, it might seem like a commentary on gun laws, or even just simple gender commentary.

“Origins of Galactic Law” is a clever set of fictional factoids about how some odd laws came to be. I enjoyed this and marveled at the random creative energy it must have taken to come up with these odd stories that lead to some interesting laws. I also enjoy Mr. Stone’s artwork.

“Riders of the Iron Trail” by Charles Layng was a nice surprise. Dave Morrows is a veteran hogger without a wreck to his name. His wife, Jane, wants his son, Hildreth (I am not kidding…Hildreth) to go to school and escape the railroad life, but Dave knows Hildreth should continue the family tradition of running the local line. An unfortunate wreck ends Dave’s career at the young age of seventy, but a desperate situation brings him back in a time of need for the railroad, with Hildreth realizing that a life of shoveling coal is really the right fit, and is thus saved from all of that silly education.

Mr. Layng has extensive railroad experience and his love of the rails comes through in this story. If you have never dived into railroad culture in the early days of the twentieth century, this story will make you a fan.

Forgive me, but I did not get “University.” Issac Asimov once wrote that if you do not understand a science fiction story, you should not assume it was brilliant or just over your head. Maybe this was a psychological thriller in a speculative setting, or a least it takes place in space. I can enjoy any genre of writing, but this one never grabbed my attention. The dialogue seemed like random nonsense and frankly, I just didn’t care.

I haven’t read a lot of Kurt Vonnegut, so I was curious about “Unready to Wear.” The premise was promising enough: humans have evolved the ability to move around as spirits but can still inhabit any number of community bodies when they want to. There is also a nice development device in the middle when they are trapped by the people who are still in their original bodies. The ending seemed kind of sudden and incomplete, even though the narrator gives us a nice final thought to contemplate.

“The Sentimentalists” is one of those rare stories that keep you wanting more page after page. I read a LOT of short stories and I enjoy most all of them, but few of them are as hard to put down as this one was. It could be that this was just the best story in the past two issues.

Lon wants to earn enough money from his farm to marry Cathy, but the Cetis Gamma Trading Company has an evil scheme to put their farmers further and further into debt, until there is no choice but to enter a life of servitude to them. Enter Rhadampsicus and Nodalictha, a god-like newlywed couple, who intervene and help Lon out of debt by planting ideas for inventions in his head. This unique method of advancing two storylines at once makes this story a great read.

I wrote these essays before I read yours. We seem to line up in our reactions fairly well, once again. See you next month.

Gus, thanks for your thoughts. You kept the two issues separate for the most part. But “Riders of the Iron Trail” wasn’t in this issue. 🙂

We do align for the most part on our thoughts on the issue. I think “The Sentimentalists” works because it’s completely alien (even the humans are on an alien planet), but Leinster makes it easy to relate to.