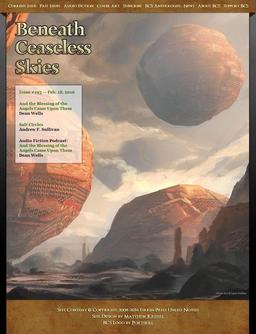 The February 18th issue of Beneath Ceaseless Skies features original short fiction from Dean Wells and Andrew F. Sullivan, a podcast, and a reprint by Black Gate author Brian Dolton (author of “What Chains Bind Us,” from BG 15). The cover art, “Plains of Another World,” is by Leon Tukker.

“And the Blessing of the Angels Came Upon Them” by Dean Wells
Peavey could not fault his grandson Moot’s skill nor the beauty of the boy’s sculpture. No, it was the subject matter that cut into his heart, even now. Moot cherished his beliefs so deeply; if his faith were ever shaken, it would surely devastate him. He was so very much like his grandmother in that regard.

“Salt Circles” by Andrew F. Sullivan
From this window, we watched the man’s whip rise again and the back hoof of the mare collide with his thin throat in the same instant. The man crumpled down into the festering street as gouts of blood spouted from his neck. No one came to claim his body. Below us in the alley, rats and dogs or rat-sized dogs emerged slowly. They began to sip at the red puddles around him.

Audio Fiction Podcast
“And the Blessing of the Angels Came Upon Them” by Dean Wells
Consuming the native crustaceans had given rise to bone cancers and rotting ulcers of the skin, from which death was a cruel relief.

From the Archives
“The Sacrifice Pit” by Brian Dolton (from Beneath Ceaseless Skies #16, May 7, 2009)
She was beautiful. But it was forbidden, in the eyes of the Tetharan.

Dean Wells is author of the ongoing post-steampunk saga The Clockwork Millennials. His short fiction has also appeared in Ideomancer, 10Flash Quarterly, Eldritch Tales, ShadowKeep Magazine, and The Nocturnal Lyric. Andrew F. Sullivan is the author of the novel Waster (forthcoming from Dzanc Books, March 2016) and the short story collection All We Want is Everything (ARP Books, 2013). Brian Dolton’s story “What Chains Bind Us” was published in Black Gate 15; Learned Foote reviewed his story “This Is the Way the Universe Ends: with a Bang,” in the March/April 2015 issue of F&SF here, saying “The setting is lovely and poetic, the story is cosmic in scope and creative in its world-building, and the moving conclusion made my throat tighten.”

We last covered Beneath Ceaseless Skies with issue #192.