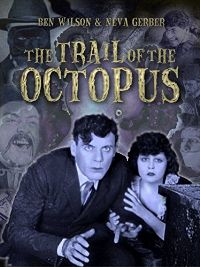 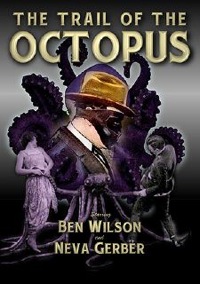 J. Grubb Alexander’s script is a delirious kitchen sink affair which makes it obvious the plot was not worked out in advance, but instead hurriedly concocted during production of the fifteen chapters. The globetrotting adventure kicks off with a prologue in the Egyptian desert before cutting back and forth between San Francisco, Paris, and Hong Kong. From the atmospheric opening in the Sahara at the Temple of Death where Dr. Stanhope and his rival, Dr. Bornay savagely fight for possession of the talisman to the set-up which sees the niece of the murdered Dr. Stanhope become the target of The Octopus and his international band of criminals to obtain the nine ceremonial daggers which will unlock the vault containing the Sacred Talisman of Set. 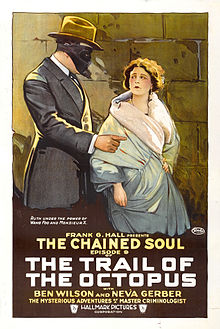 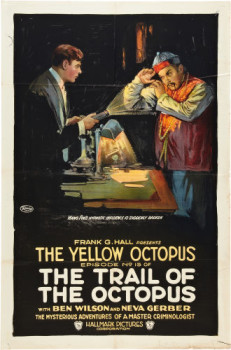 While Sax Rohmer’s influence hangs over the proceedings, there is also a fair amount borrowed from both The Exploits of Elaine (1914) and its sequels as well as The Mysteries of Myra (1916). More than just Perils of Pauline clones, Elaine featured Craig Kennedy, (pulp writer Arthur B. Reeve’s answer to Sherlock Holmes) pitted against Wu Fang (a Fu Manchu clone whose name was subsequently borrowed by Roland Daniel for a series of novels featuring an unrelated Chinese criminal mastermind as well as by Robert J. Hogan for a short-lived pulp magazine likewise featuring an unrelated Chinese criminal mastermind); while The Trail of the Octopus featured Carter Holmes (another Sherlock Holmes knockoff) up against Wang Foo (clearly no relation to any other Wang Fu).  More importantly, Myra featured esoteric occult touches such as transmogrified souls and disembodied hands which were duplicated in The Trail of the Octopus. Finally, Ruth Stanhope is a heroine cut from the same cloth as Pauline Hargraves, Elaine Dodge, and Myra Maynard; the classic damsels in distress of silent cinema and early pulp fiction. One should note that upon viewing or reading the originals, these women were far more capable than decades of imitation and mockery would suggest.

For those less familiar with Sax Rohmer, early silent serials, and pulp fiction of the early Twentieth Century, The Trail of the Octopus may seem only to be an ancestor of Raiders of the Lost Ark (1981) (there’s even a Temple of Death to rival the Temple of Doom in the second Indiana Jones film) and Stephen Sommers’ update of The Mummy (1999). For as much as silent serials are time capsules, they regularly portray a vitality and excitement lacking in the early talkies. The Trail of the Octopus is no exception. Some viewers adore its mad and unstructured form while others are frustrated with it for the same reasons. My own preference is to enjoy it for the sheer fun it provides and to appreciate it for its undeniable place in pulp and cinematic history. The Trail of the Octopus is an essential link in the chain of pop culture of the last two centuries. Sample it on YouTube and then visit http://serialsquadron.com to order a copy of this early motion picture treasure for yourself.

I think Robert Weinberg republished a small run of these serials in the 70’s.