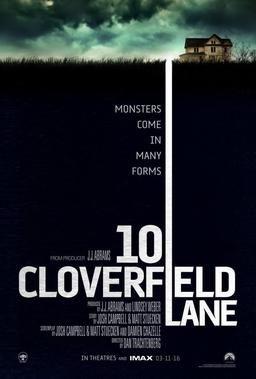 The story I’m about to tell you gets a little confusing, but it contains J.J. Abrams, one of my all-time favorite modern-day monster films, Cloverfield and an entire movie filmed right under the noses of the people whose business it is to keep tabs on this sort of thing. So stay with me, I think it will be worth it.

Our tale begins early last week when the internet exploded with the news that a new Cloverfield film was not only confirmed, but that it was already filmed and would be coming out in just under two months. Titled 10 Cloverfield Lane, the film is a. “…blood relative of Cloverfield,” according to J.J. Abrams, who produced the original film, and stars John Goodman, Mary Elizabeth Winstead, and John Gallagher, Jr.

Before we go on, let’s take the way-back machine to 2008 in the months before the release of the original Cloverfield, which was also kept very much under wraps and was credited with being the object of a new concept in millennium marketing; “guerilla campaigns.”

The film appeared to feature a mysterious monster of unknown origin ravaging a large city in the style of Godzilla movies from decades past, but what really made it notable as far as big-budget movies are concerned, was its seeming lack of any promotion at all. The film was ushered into theaters with an incredibly simple teaser trailer that didn’t even feature the title of the film. It only contained the release date – 11/18/08. Beside the fact that it starred a cast of unknown actors and featured a monster doing something in a city that had yet to be identified, almost nothing was known about the film prior to its release. It initially wasn’t even clear if Abrams himself was even involved.

In parallel, several internet leaks at the time pointed to a tie-in between Cloverfield, a fictional Japanese soft drink called Slusho! and the fictional company who made it, Tagruato. Websites for both the drink and its parent company were launched to add to the mythology and the Japanese phone number in the Tagruato website did work, playing callers recorded messages. 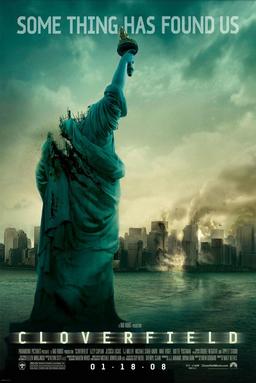 When Cloverfield was hosted at Comic-Con 2007, gray Slusho! T-shirts were distributed to attendees. Fans who registered at the Slusho! website received e-mails of fictional sonar images that showed a deep-sea creature heading toward Manhattan. Fans who ordered merchandise received pieces of torn Tagruato documents and Japanese newspapers along with their products.

Of course, none of this did a thing to damage Abrams’ reputation as a masterful filmmaker capable of whipping his potential audiences into a frenzy of anticipation.

So here we are, back in 2016 facing another flurry of rumor and supposition around the latest Abrams’ sleight of hand – 10 Cloverfield Lane.

Immediately following last week’s announcement, some deep-thinking web-active individuals felt this had more of a spinoff-vibe than an actual sequel to Cloverfield. Some even speculated it was most likely an extension of the anthology concept that’s sweeping Hollywood these days.

And while speculation continues to run rampant, one thing is for certain, or at least mostly certain – 10 Cloverfield Lane is probably not an actual sequel to Cloverfield, more than likely – we guess.

Then what the heck is it?

Apparently, 10 Cloverfield Lane was originally announced under the title The Cellar. The Reddit user alleges that it was produced under Paramount’s Insurge (the micro-budget branch which was dismantled in early 2015), and “when Paramount closed it down, this movie (shot and completed) was orphaned.”

Paramount brought it back up and had Dan Casey and Damien Chazelle do some re-writes so that it would connect to the Cloverfield universe and they went back and did reshoots and add-ons in March 2015 in New Orleans and L.A. 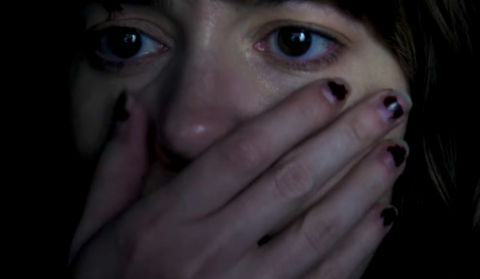 Keylife23 also claims to have the 2013 screenplay for The Cellar, which has no mention of any monster. Info from the original script on Spec Scout summarizes it this way:

After a drunken car crash, MICHELLE BURKE (18) wakes up in a strange room. Her leg is badly wounded and she cannot walk. When a strange man, HOWARD STAMMLER (40’s,) appears, she tries to escape, but collapses from pain. When she wakes up again in the wine cellar-cum-bomb shelter, Howard tells her that he took care of her wounds when he found her unconscious on the highway. She demands to leave, but Howard warns her that a nuclear attack has destroyed the town and a chemical has poisoned the air outside. For now, she has no choice but to accept his help.

Meanwhile, Michelle intermittently has flashbacks to the night of her accident. She remembers leaving a party after her boyfriend cheats on her, and drunkenly hitting the road in her car.

So you can begin to imagine where the rework might be going. Does Michelle leave the same going-away party that pops up in the found-footage in Cloverfield? If it isn’t a global nuclear attack that has everyone in bomb-shelter – could it be connected to the climax of the previous film?

To speculate further, we now have to move on and examine the trailer, which was released Friday.

As you can see, 10 Cloverfield Lane doesn’t confirm what precisely is the malevolent force keeping everyone trapped in the bunker. And as the trailer darkens, we are led to believe that Goodman’s character may be bad, especially when Winstead’s character makes her mad dash for freedom.

But wait — do my ears deceive me, or was that a roar (growl) at the very end as “Michelle” is starring wide-eyed out the window?

So is it a sequel or isn’t it?  Is there a Godzilla-like monster or is Goodman’s character monster? Is any of the speculation real, or are we being drawn in by another Slusho! tactic?

In typical J.J. Abrams fashion, it’s all so mysterious. But the anticipation is already making this more fun than anything else in recent memory.

Let’s all add to the chaos shall we? Post your own speculations here or if you don’t want the whole world taking credit for your insightful speculation, drop a line to sue@blackgate.com and I’ll do it.

I remember very little about the original other than it was mysterious, and that a friend that saw it said it made him nauseous because of the camera ‘work’ of people running around with hand held recorders. This is too under the radar for my old self, but it does beg a question. Did Abrams seek to direct the most marketed and least marketed films in a year? Kind of like winning an Oscar and a Razzie (ala Sandra Bullock) in the same year?

I never watched Cloverfield. I’ve been curious about it for some years, though. Should have a monster movie fest and watch it. I really enjoyed del Toro’s Pacific Rim.

I have to admit the trailer for 10 Cloverfield Lane is really intriguing. But I’ve always liked John Goodman and I’m a sucker for anything remotely post-apocalyptic.

I never watched Cloverfield. I’ve been curious about it for some years, though.

Here’s something to intrigue you a little bit more: the big main monster? Not even the scariest thing in the movie…

Darling Art – good point, but I kinda of love that Abrams is doing just that. With everything he has going on it tells me he still takes on some projects just because he wants to.

Bert, you’re missing out on a hidden gem. For sure snuggle up with a rum drink and a warm piece of king cake and give it a go. You won’t be disappointed.

Horseman, now that I know Cloverfield is on Netflix, I know what I’m doing for at least part of the weekend. And if you’re referring to the original, you’re absolutely right. The main monster isn’t the subject of the most shocking scene in the flick.

Now you all seriously need to go watch it.

The pleasure of Cloverfield will always be a closed door to some, simply because the handheld camera work puts some people off their lunch.

For myself, it is one of the seminal monster movies, and I’ll tell you why. First off, the story is fine, the monster is pretty cool, and — critically — the acting is up to par: these are believable people and we can relate to them as our “stand-ins” in the midst of this horrific event.

But while all of those components are important to making it a good film, they are not what put it in the top ranks. That would be the fact that Cloverfield did something I don’t think any giant monster pic ever did before. It put us right down at human level, beholding the cataclysmic event from ground level.

In the 50-year history of giant monster pics, that “pathetic little human’s-eye view” was rarely even attempted: we mostly just watched the giant beasts knocking over buildings as if from stadium seating, watching a circus. Occasionally we might get a street-level shot of a giant monster’s foot stomping down while people fled, but it was still usually at a slight objective-camera-eye remove.

In this sense, Cloverfield is to giant-monster pics what Saving Private Ryan is to war films: it put you, as far as it is possible to do with the 2-d film medium, right in the heart of the action. The tanks rolling by, chunks of buildings flying, lumbering organic parts ponderously swinging by — so large in scale that one is not sure exactly what one is seeing — and you’re in the midst of the chaos, right there on the sidewalk as it all goes down.

The handheld camera effect is, of course, an essential component to what makes this work, so the element that makes it inaccessible to some is also what makes it so massively effective.

Oz, always love your perspective and I feel sorry for anyone who feels barfy watching the hand-held camera perspective. To you point, its what makes Cloverfield so “in your skin” terrifying.

Joe, I’ve warned you before about trying to make sense of Hollywood – you’ll end up needing an aspirin.

Oh and whatever you do, do not watch the new version of X Files. You’ll end up needing a sick day.