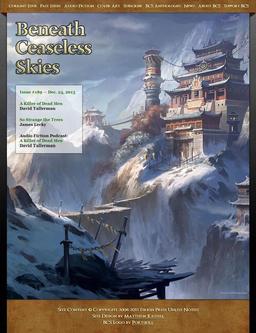 The December 24th issue of Beneath Ceaseless Skies, issue #189, has original short fiction from David Tallerman and James Lecky, a podcast, and a reprint (from issue #79) by Kat Howard.

“A Killer of Dead Men” by David Tallerman
Otranto didn’t hesitate. On some level, he realized, he had been anticipating this moment, or one like it, for a very long time. “The punishment for failure should be death by my own hand.”

“So Strange the Trees” by James Lecky
Alquen waited there, sitting in the lee of a tall elm, for three hours, barely aware of time passing. He wore his finest clothes: a blue silk shirt with only two threadbare places, black tunic and breeches covered with a burgundy cloak. He felt ridiculous and handsome at the same time.

Audio Fiction Podcast:
“A Killer of Dead Men by David Tallerman
Otranto knew better than to ask why any man must die.

From the Archives:
“The Calendar of Saints” by Kat Howard (from BCS #79, October 6, 2011)
I accept mortal commissions; I’ve killed before.

We last covered Beneath Ceaseless Skies with issue #188.