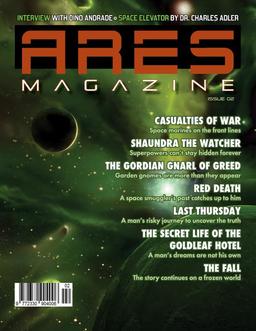 The legendary magazine Ares, published by SPI between 1980 and 1984, included a complete SF or fantasy game in every issue. It lasted only 19 issues, but in that time it produced several much-loved games, including Greg Costikyan’s popular Barbarian Kings, an adaptation of Poul Anderson’s 1960 novel The High Crusade, the proto-RPG Citadel of Blood, the under appreciated classic Star Trader, and many others.

Last year Matthew Wuertz reported on the successful attempt to resurrect Ares Magazine by One Small Step Games through a Kickstarter. The first issue of the new version came out last year, with the complete two-player game War of the Worlds, and a nice mix of intriguing articles and fiction. I checked the website recently and discovered the second issue is now available as well, packed with original fiction, articles, and of course a brand new game, Invasive Species. Here’s a peek at the complete contents:

The science behind the construction and utility of space elevators, and why they are so much better than space escalators.
Interview with Dino Andrade, professional voice actor and driving force behind SoulGeek.com
Invasive Species, a two-player boardgame

Invasive Species pits the human crew of a small scout space ship, the CFS Quicksilver, against an alien apex predator trapped on board.

Here’s a look at the board: 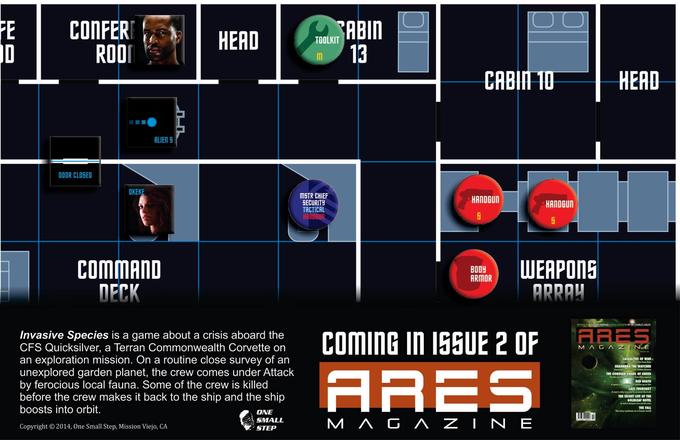 And here’s a look at this issue’s editorials: 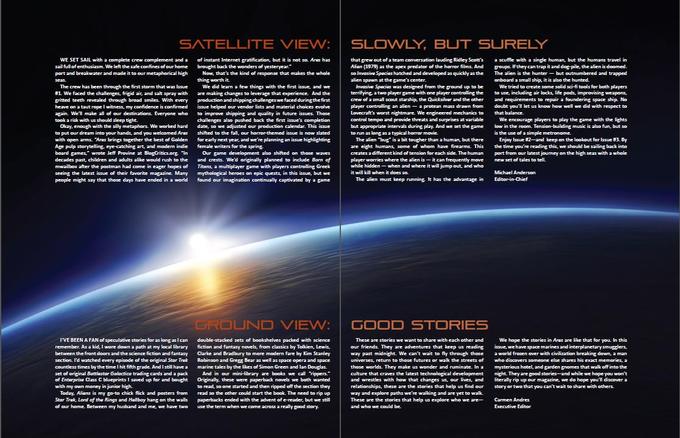 The game Born of Titans was scheduled to be published in issue #2, but that game has been pushed out to the third issue.

Ares also includes a surprising amount of fiction as well:

Ares is definitely shaping up into something deserving of support. I’l lbe keeping my eyes out for the next issue.

Ares is edited by Michael Anderson and published by One Small Step Games. Issues are 80 pages each, and are priced at $30. A three-issue subscription (US-only) is $78. Buy copies directly at the One Step Games online store.

I think I read on their website that Issue 1 sold out, so if you want Issue 2, I suggest getting it quickly.

Issues are pretty expensive ($30 each? – that’s more than a hardcover!), so I’m pleased to see they’re still selling well.

Boy, I liked the original Ares magazine. Right from Issue #1 and the game WorldKiller. And then the Pandora duo. And Citadel of Blood. And Delta Vee. And Star Trader. Most of which I still have squirreled away, someplace.

Wasn’t it marvelous? And all for just $3 per issue!

In the early days of eBay, you used to be able to pick up old Ares magazines for a song. I bought a virtually complete set (with almost all the games intact and unpunched!) for $50 — about what they cost back in the early 80s. Nowadays, individual issues sell for $40- $50.

I was not aware Ares actually had games in it. My only exposure was to an Ares section in quite old Dragon magazines. Not sure the connection? Maybe TSR bought SPI?

Tiberius — that’s exactly right. TSR bought SPI (technically, they called in a loan, and the company defaulted, putting TSR in possession) in 1983. TSR published the last few issues of Ares as a standalone magazine, and then merged Ares with their own magazine, Dragon. There was an Ares section in the Dragon for quite a while — maybe a year or two? — before it was eventually discontinued.