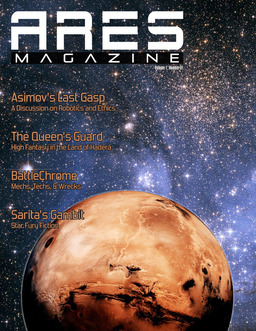 Recently, I wrote about the Rebirth of Ares Magazine. Earlier this month, they wrapped up a successful Kickstarter campaign, raising $26,185, or 105% of their goal.

Now, they’re moving forward to deliver their premiere issue in May.  The issue will contain the complete two-player game War of the Worlds, designed by Bill Banks, and a nice mix of intriguing articles, including:

along with three short stories, interviews, ads, and other content.

Ares is inspired by the classic Ares Magazine, published by SPI between 1980 and 1984. It included a complete SF or fantasy game in every issue, including Greg Costikyan’s classic Barbarian Kings and Citadel of Blood; The High Crusade, based on Poul Anderson’s 1960 novel of interstellar conquest on horseback; The Wreck of the B.S.M. Pandora; Nightmare House; The Omega War; and nearly a dozen others.

The issue will be 80 pages in full-size (8.5″ x 11″) format; future bi-monthly issues are already in the works. Keep up on the latest news on their website.

Glad to see this one is up and running.