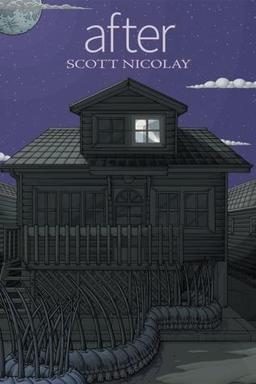 Jeffrey Ford took a chance on an unknown magazine, and sold us a story for the very first issue of Black Gate. (And a terrific story, too — a gonzo mystery set on an alien world, “Exo-Skeleton Town.” You can read the entire thing at Infinity Plus.) We’ve been pals ever since. One of the things I like about Jeff is he treats his Facebook friends to great, punchy mini-reviews of some excellent (and often hard-to-find) titles. That was the case yesterday, when he wrote the following about Scott Nicolay’s creepy horror tale After. He gave me permission to post it here. Enjoy.

if you get a chance, check out Scott Nicolay’s stand alone novella, After. About a woman who returns to her home in Seaside Heights after super storm Sandy to check on the damages. FEMA says she’s not allowed to stay but she does only to find out that some strange creature has been brought in by the storm and is lurking beneath her house.

This one’s got everything I like in a horror story — the slow burn, deep characterization so I care about the character, and the rare instance of a metaphorical resonance between the fearsome aspect of the world (the monster) and the defining condition of the character (in this case an abusive relationship). All this in a neat little book, well made (from Dim Shore Press) with a great cover and nice illustrations by Michael Bukowski.

Scott Nicolay is also the author of Do You Like to Look at Monsters? and Ana Kai Tangata: Tales of the Outer the Other the Damned and the Doomed.

After was published by Dim Shores on August 4th 2015. It is 104 pages, priced at $10 in trade paperback. The cover is by Michael Bukowski. The Dim Shores website is here.

See all of our recent Reviews here.