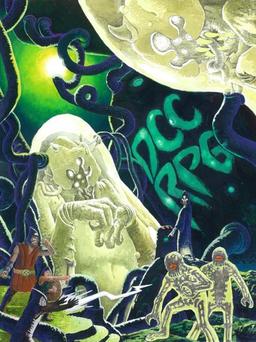 The Dungeon Crawl Classics RPG is one of the most successful OSR (“Old School Renaissance”) games on the market, with a well-designed, modern rules system grounded in the origins of sword & sorcery. Now publisher Goodman Games is going back to press with a fourth printing, and to fund it they’ve announced a Kickstarter. Here’s the basic spiel.

Return to the glory days of fantasy with the Dungeon Crawl Classics Role Playing Game. Adventure as 1974 intended you to, with modern rules grounded in the origins of sword & sorcery. Fast play, cryptic secrets, and a mysterious past await you: turn the page…

What if Gygax and Arneson were able to build upon thirty years of game design when they created D&D? What if they were freed to focus on their stated inspirations — rather than creating the RPG building blocks from scratch? What if someone were to attempt just that: to immerse himself in the game’s inspirations and re-envision the output using modern game design principles?

That, in short, is the goal of DCC RPG: to create a modern RPG that reflects D&D’s origin-point concepts with decades-later rules editions. From the company that was publishing old-school modules before the OSR ever existed, DCC RPG is not an old-school clone, but a re-imagining of what D&D could have been, utilizing the game’s primary sources of inspiration.

The goal was a modest $15,000; as of this writing the campaign has surpassed $91,000 in pledges, with 18 days left and absolutely no signs of slowing down. The publishers have added an extravagant number of stretch goals — and the ones that have already cleared include sewn-in satin ribbon bookmarks, a full color dust jacket, two built-in 4-panel judge’s reference panels, reprints of five out-of-print modules, and gilded page edges. It’s not too late to jump on board and get all the stretch goals — and the 480-page hardcover rule book — for just a $40 pledge.

What’s Dungeon Crawl Classics all about, then?

We first covered the game back in May 2012, when it was first released. It’s a complete rules system, meaning it’s all you need to play the game. It’s similar to many of the OSR games we’ve covered in the past, including Castles & Crusades, Labyrinth Lord, and Astonishing Swordsmen & Sorcerers of Hyperborea, but it not simply an old-school clone –at 480-pages for the rule book, Dungeon Crawl Classic is both more complete, and much more ambitious.

There’s only one rule book (and Goodman Games is committed to keeping it that way) but there are dozens of adventure modules, and two official campaign settings: Lankhmar, licensed by the estate of Fritz Leiber, and the sci-fi crossover Mutant Crawl Classics. The new fourth edition is very similar to the third printing, with some corrections and updated ads, plus a new low-level adventure by Harley Stroh, “The Abbott of the Woods.”

Here’s what Howard Andrew Jones wrote, in part, in his review of the first printing of DCC:

There are any number of things I love about the DCC role-playing game, but I think my very favorite may be the implementation of spell battles. We read about spell battles in books, and we’ve seen them in a host of movies, but I’ve never yet seen any role-playing game that enables the moment from, say Harry Potter and the Mumblety Something when Voldemort and Dumbledore exchange spell after dangerous spell, shaking one off to cast another. An inventive segment of the rules in DCC actually allows gamers to emulate those very scenes.”

Get the complete details at the Kickstarter page.