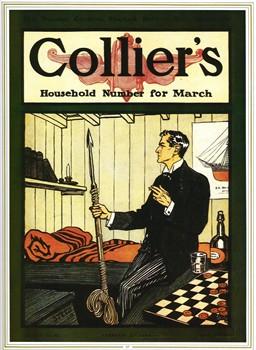 Back in July, in a post on Sidney Paget, I wrote “Along with Frederic Dorr Steele, Paget is certainly one of the two most significant illustrators of the great detective.” Having covered Paget, now we look at Dorr Steele.

In 1893, Doyle, feeling that writing Holmes stories was holding him back from more important works, did the unthinkable: he killed the world’s most popular detective. In 1902, he revived Holmes for one adventure in his most famous story, The Hound of the Baskervilles, with good old Sidney Paget illustrating again. Doyle made it clear this was an earlier case of Holmes’ and that the great detective was, in fact, still dead.

The stories from The Adventures of Sherlock Holmes and The Memoirs of Sherlock Holmes had been illustrated by various artists in America, where they appeared in different magazines and newspapers. There was no sole source for the stories, as there was in England with The Strand. For the most part, the drawings were rather uninspired

Some of Paget’s were also used, but often just a few, not the full set for each story. Thus, a common image of Holmes had not evolved from the drawings. There was no Sidney Paget in the United States. But there was about to be! 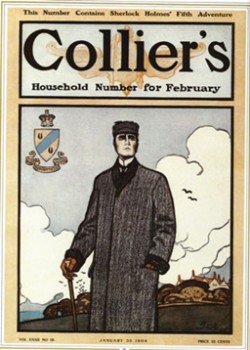 In 1903, the American magazine Collier’s threw a big bushel of money at Doyle and enticed him to fully bring Holmes back to life. Funny how ‘artistic integrity’ often bows down before cold, hard cash, eh?

Collier’s selected Frederic Dorr Steele to illustrate The Return of Sherlock Holmes. Dorr Steele drew forty-six illustrations for The Return; Holmes’ face was included in twenty-six of them. But it is the ten colored front pieces for The Return that put Dorr Steele alongside Paget (Sidney: not his brother Walter – remember him from that prior post?) atop the pantheon of Holmes illustrators.

They are possibly the finest set of drawings for the entire Canon. They are grand illustrations, crackling with color. They have been used on the cover of countless Holmes books since (especially with the advent of self-publishing).

In 1889, William Gillette opened his play, Sherlock Holmes. Of course, you know that since you read this post, but that’s neither here nor there (then where the heck is it?). Gillette would play the great detective on stage over 1,300 times, make a silent film and do the first Holmes radio broadcast. The accomplished thespian played a huge role in the image of Sherlock Holmes, but not everybody could see Gillette live on stage. 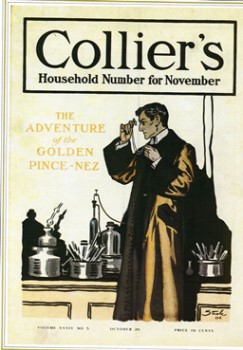 One need only see Holmes’ face to realize that Dorr Steele was strongly influenced by William Gillette. In fact, it’s difficult to believe that Gillette did not model in person for the drawings!

But Dorr Steele related, “I did not need to make my Sherlock look like Gillette. The thing was inevitable. I kept him in mind and even copied or adapted parts of a few of the stage photographs. At that time I never had seen the play.”

In 1929, Gillette gave an interview to H.I. Brock of The New York Times and allowed Dorr Steele to sketch him. It was the first (and I believe only) time that Dorr Steele got to draw the actor “live.” Dorr Steele’s original model for the thirteen stories in The Return of Sherlock Holmes had been an Englishman named Robert King.

It’s Elementary -Dorr Steele holds the honor of having been the first living illustrator to be exhibited at the Library of Congress.

Dorr Steele wrote the essay “Sherlock Holmes in Pictures,” which was included in Vincent Starrett’s 1940 anthology, 221B:Studies in Sherlock Holmes. Of himself, the illustrator said, “Oddly enough, I do not care for detective stories, and never have had any desire to curl up with a good one.” But he certainly knew how to draw them.

Dorr Steele discusses a few illustrators who came before him and then says of Gillette, “Mr. Gillette was blessed by nature with the lean, sinewy figure and keen visage required, and his quiet but incisive histrionic method exactly fitted such a part as Sherlock. I can think of no more perfect realization of a fictional character on the stage.”

He would provide drawings for six of the eight stories in His Last Bow. It had been three and-a-half years since The Return, but the pictures were as impressive as ever.

The Casebook stories debuted in America between 1921 and 1927. Several illustrators were used,with Dorr Steele contributing thirty-four pictures in all for these stories.

It’s Elementary – Shortly after completing his 1922 film, Sherlock Holmes, star John Barrymore met Dorr Steele, who told him that he used to draw pictures of Holmes. Barrymore replied “Why, hell, we had all your old pictures out on the lot. You’re more to blame than Gillette.”

There can be no doubt that Dorr Steele was the definitive American illustrator of Sherlock Holmes, and he contributed to William Gillette’s enduring success in becoming identified with the master sleuth. For me, I believe that his drawing of the retired Holmes, standing alone on the beach in The Lion’s Mane, is the finest Holmes illustration of them all. It’s Elementary – Dorr Steele related attending a luncheon for Arthur Conan Doyle in New York City. Doyle started the conversation with, “Young man, do you know who did the best illustrations ever made for me? Cyrus Cuneo.” Dorr Steele had determined to be self-effacing in the talk. Pride goeth before the fall.

In The Private Life of Sherlock Holmes (the book that provided this column’s title), noted Sherlockian Vincent Starrett wrote, “No happier association of author and artist can be imagined.” He added, “Sixty tales, in all, comprise the saga of Sherlock Holmes; and Steele has illustrated twenty-nine. While he yet lives and loves, and lifts his pencil, will he not do the other thirty-one?”

That’s a pretty good note to end this essay on.

“You’ve got to be ‘James Bond cool’ to pull off holding a harpoon in one hand and a lit cigarette in the other.