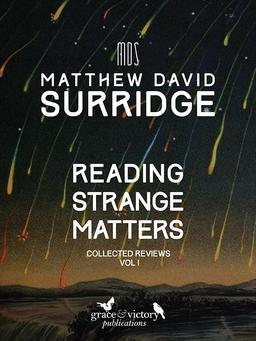 Matthew David Surridge became a blogger here in June 2010, after his acclaimed story “The Word of Azrael” appeared in Black Gate 14. His very first post was “The Art of Storytelling and The Temple of Elemental Evil,” a look at how unpredictable stories spontaneously arise out of D&D sessions, using his own experience with Gary Gygax’s classic adventure as an example.

Since then he’s published 259 articles with us, and become one of our most respected and cherished writers. He was nominated for a Hugo Award this year (and his post declining the nomination, “A Detailed Explanation,” became the most-read article in Black Gate‘s history.)

Matthew’s blog posts are very different from what we normally do here. We cover a lot of ground at the site — keeping you up-to-date on the newest fantasy releases, reminding you of overlooked vintage paperbacks, informing you when magazines go on sale, and the like. By their nature, most of those articles are short and to-the-point. In contrast, Matthew’s pieces dive deep into carefully-selected subjects, exploring some of the best (and most overlooked) novels and writers in the field, and engaging them with depth and passion.

“I think I do good work,” one of his fellow bloggers confided in me years ago, “but Matthew raises blogging to a fine art.”

So I was delighted to see the release this week of the first collection of Matthew’s Black Gate columns, Reading Strange Matters: Collected Reviews, Vol I, from Grace & Victory Publications. It collects 23 of his best book reviews, plus one brand new piece, on Nalo Hopkinson’s Skin Folk.

In his Foreword, Matthew explains a little of his fascination with fantasy, and how he defines novels of the fantastic:

By ‘novel of the fantastic’ I mean more or less what the phrase looks like: a novel which uses some fantastic or visionary element as a crucial part of its structure. Elsewhere in these essays I use the simpler word ‘fantasy’ to cover the same thing. I see a contrast between the fantastic and the mimetic, which I’ll define for the moment as the representation of conventional everyday reality in fiction. The fantastic represents the subordination of conventional reality to a fiction which consciously contradicts that reality in a significant way. I give these admittedly vague definitions mainly because I want to be clear that ‘fantasy’ for me has a much wider meaning than simply ‘work from within the fantasy publishing genre.’ Some of the books I write about here come out of that world, and some don’t.

Although these essays weren’t written with any kind of common theme in mind, it seems to me that they may collectively be read as considering the ways by which techniques developed within ‘genre fantasy’ can be and have been used by non-genre writers. Generally, I’m interested by writing in which the visionary impulse is given priority over the mimetic impulse. That kind of writing’s usually more engaging to me than an irritable reaching out after facts and reason.

Here’s the complete Table of Contents for this volume:

Reading Strange Matters celebrates [some] of the best in fantasy from the twenty-first century. Two dozen essays discuss important books from the new millennium which mix wild imagination and literary sophistication.

One essay, on Nalo Hopkinson’s Skin Folk, appears for the first time. See where speculative fiction’s going, and see some of the new worlds opening up in literature! The future’s being written right now — and you can read about the strange matter of that writing here.

Reading Strange Matters: Collected Reviews, Vol I was published by Grace & Victory Publications on October 5, 2015. It is 135 pages, priced at $2.99 for the digital edition. It is available through Kobo, Amazon.com, and other fine outlets.

Thank you, Mark! And thank you, John!

You’re one of the best reviewers, in any genre, writing in any medium right now. Keep it up!

Also ultimate respect for declining the Hugo nomination (even though you deserved it) after a not-to-be-named individual poisoned the waters.

Thank you very much, Nebuchadnezzar!