And of course I have to mention the grinding, with most players probably giving up at the first boss fight. The jump in difficulty from regular fights to that first boss was extreme, and it required a lot of grinding to get past it. Once you did, and started to develop your party’s core skills, things got easier, but the game’s pace suffered for it. 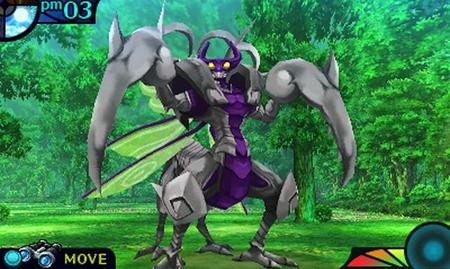 Both Etrian Odyssey 1 and 2 faced average to poor reviews from people who didn’t want to deal with the grinding and hardcore difficulty; while 3 started to turn things around as people were expecting it at that point.

Another consequence of those poor reviews was a low print run. Atlus for most of the last decade was notorious as the developer that forced you to buy games day one, or you might never find them again. Atlus didn’t want to overestimate their game’s popularity, and consequently produced limited runs based on preorders.

On the plus side, this allowed Atlus to make a predictable profit, as they never overcommitted, and kept production costs down. The downside was that if you missed out on a game, good luck finding a copy.

Besides Etrian Odyssey, Shin Megami Tensei: Nocturne also had this problem; with new copies being sold on third party markets for $100+. It wasn’t until near the end of the decade, as Atlus’s popularity grew, that they began reprinting their games, and both Etrian Odyssey 1 and Nocturne become available again at reasonable prices.

When the series was moved to the 3DS with Etrian Odyssey 4, this gave Atlus a chance to revise the formula, along with giving it a graphical update. The changes that Atlus made turned Etrian Odyssey 4 into the best selling game in the series, as well as the current highest rated. I’d really love to spend more time talking about Etrian Odyssey 4, but it’s time to focus on what Atlus did next. Maybe in another post. 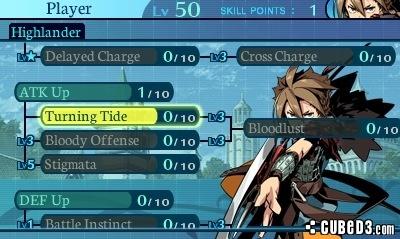 While Etrian Odyssey Untold kept the themes and plot points of the original version, it featured both minor and major changes to how the game was structured. The first and possibly biggest change was the inclusion of a story mode. Traditionally, each game featured a story that let the players define their entire party from scratch; no cut-scenes, no character development, just five adventurers taking on a dungeon.

With Untold, the developers now had a story and classic mode. Classic mode is the original game with the new changes to the design and balancing (more on that in a second.) Story mode framed a new plot around the game’s dungeon, giving players a party of five characters. Unlike in previous games, you had to make use of these set characters for your party.

While this may sound sacrilegious to fans who’ve played the previous four games, a story mode option does help make the series far more accessible. With a set party, a new player doesn’t have to worry about poor party composition, and can enjoy having a group that complements each other well. A story helps pull players into the world, and is a motivating factor to see it through to the end. Another detail for returning players was that beating story mode unlocked two new classes for classic play.

Besides the story, there were a number of changes that enhanced the game for both returning fans and those who found the original too frustrating.

Etrian Odyssey Untold 1 may follow the same path as the original, but there are a lot of changes under the hood for the discerning fan. The first is an across-the-board rebalancing of classes and their respective skills. The game took the visual skill tree interface from Etrian Odyssey 4 and went through all the skills; in some places changing them, others adding new skills. Overpowered skills were toned down, while the utility of all the classes was enhanced. Healing abilities were spread to other classes beyond just the medic, and there is a lot more leeway in how you can set up your party.

The map interface was improved with the ability to set up auto pathing on each floor; letting the party automatically move through a floor instead of manually guiding them each time. Players who filled out their maps are rewarded with the option to teleport to the stairs for quick movement up and down floors. 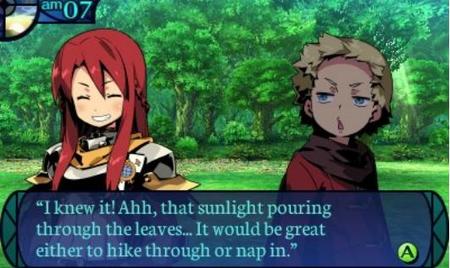 For combat, Untold makes use of the enhanced capability of the 3DS to feature fully 3D enemies, and splits enemy groups into front and back rows. Similar to Etrian Odyssey 4, this makes group encounters extra dangerous, as long range enemies can stay in the back row, where melee attacks do less damage. Additional enhancements include the increased number of enemies in an encounter, and making battles a lot more dangerous.

Outside dungeon crawling, Atlus made several changes to make the series more accessible to newcomers. The use of food for party wide buffs was added in the form of a guild house, where players receive a buff that lasts until they return from the dungeon. The guild house also provides additional quests for players to do for bonus experience, to help with the grinding.

A new piece of equipment called grimoire stones allow players to give their party members skills from other classes; providing more functionality and allowing someone to fix glaring holes in their party. These stones become unlocked via combat, and can be combined to give you greater flexibility.

As in Etrian Odyssey 4, Untold features a three-tier difficulty setting: picnic, normal and expert. This is perhaps the biggest improvement in the series’ accessibility, with each setting designed for a certain audience. Picnic mode removes the hardcore styling, and lets you continue from death, and also massively lowers the enemy stats. Normal is considered par for most JRPGS and provides a challenge with far less grinding. Finally, expert is considered the traditional scaling from previous games, and is meant for Etrian Odyssey veterans.

The addition of these systems does a lot to change the basic play of Etrian Odyssey Untold for both new and returning players. A big debate among fans of the series is if the Untold brand has enough differences to warrant a second purchase for original fans. Outside of the hardcore fans, for Untold 1 I’m split, which I know is not a good answer. There are legitimate changes to the formula that make it different from the original game, but it’s still a remastered version. With Untold 2 just released, I haven’t spent a lot of time with it yet, but there are a few more differences compared to the original Etrian Odyssey 2; look for a piece reviewing Untold 2 either on my site Game-Wisdom or featured here on Black Gate.

Etrian Odyssey Untold does feel like the definitive edition of one of my favorite series in recent years. If things remain on track, we should get an untold version of Etrian Odyssey 3, which in my opinion is the best game in the series for class variety.

For now though, if you were put off by the series’ hardcore difficulty on the DS but still like dungeon crawlers, the changes added to the Untold brand may be enough to win you over, but just be aware that these are not brand new titles and keep your reservations in check.

Josh Bycer’s last post for us was Shin Megami Tensei and a Different Take on JRPGs. He is a Game Industry Analyst with over seven years of experience writing about Game Design and the Industry. You can find his posts, podcasts and daily videos on his site Game-Wisdom and contribute to his ongoing Patreon Campaign to help him continue to create great content.