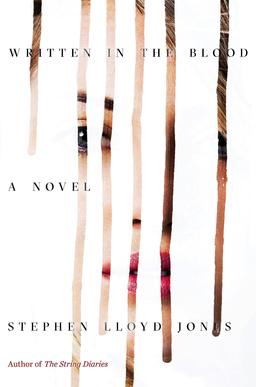 I reported on Stephen Lloyd Jones’ debut horror novel The String Diaries, the tale of a family is hunted by a centuries-old monster, last month. I haven’t even finished reading it yet, and I’m already hearing great things about the sequel, Written in the Blood, released in hardcover by Mulholland Books in late May.

The Guardian called the first novel “Chilling… A neo-gothic treat; original, richly imagined, and powerfully told.” And Booklist assures me the sequel is “just as good as the one that came before — and, in this case, that means essential reading for devotees of high-end sf.” Sounds like I’m going to have to set aside some quality time for this one, too.

See the girl. Leah Wilde is twenty-four, a runaway on a black motorbike, hunting for answers while changing her identity with each new Central European town.

See the man, having come of age in extraordinary suffering and tragedy in nineteenth-century Budapest; witness to horror, to love, to death, and the wrath of a true monster. Izsák still lives in the present day, impossibly middle-aged. He’s driven not only to hunt this immortal evil but to find his daughter, stolen from an Arctic cabin and grown into the thing Izsák has sworn to kill.

See the monster, a beautiful, seemingly young woman who stalks the American West, seeking the young and the strong to feed upon, desperate to return to Europe where her coven calls.

Written in the Blood is the epic thriller of the year, a blazing and dexterous saga spanning generations, and threading the lives of five individuals driven by love, by sacrifice, by hunger and by fear. They seek to save a race — or to extinguish it forever.