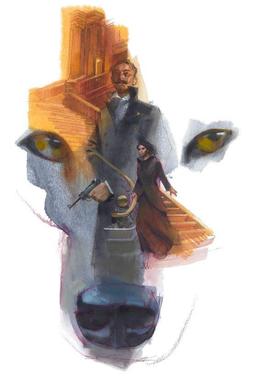 Michael Swanwick’s new novel Chasing the Phoenix was published by Tor this week, and to help mark the occasion, Tor.com has published the fifth tale in his ongoing “Mongolian Wizard” series, “The Night of the Salamander.”

“The Night of the Salamander” is a fantasy set in an alternate fin de siècle Europe, featuring a locked room, a murder, and an unexpected kind of magic. The previous stories in the series were all published at Tor.com, and they are all available completely free. They are:

All five stories were marvelously illustrated by Gregory Manchess, who also provides the art for the newest installment (at right). The entire series was acquired and edited by Patrick Nielsen Hayden.

Michael Swanwick is also the author of The Iron Dragon’s Daughter and its sequel The Dragons of Babel, Stations of the Tide, Jack Faust, Bones of the Earth, and other novels, plus nine collections, including A Geography of Unknown Lands, Tales of Old Earth, and The Dog Said Bow-Wow.

“The Night of the Salamander” is 5,400 words. Read the complete story here.

We last covered Tor.com in July, with Michael Livingston’s story “At the End of Babel.” For more free online fiction, see our complete magazine coverage here.