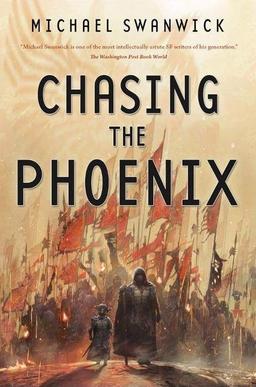 Michael Swanwick’s Darger and Surplus stories, featuring a con-man and a genetically engineering talking dog, began with the Hugo-award winning short story “The Dog Said Bow-Wow” in 2002. Since then there have been many additional tales of adventure featuring the two, including the 2002 Hugo nominee “The Little Cat Laughed to See Such Sport,” and the 2011 novel Dancing with Bears (which finished sixth in the 2012 Locus Poll for Best SF Novel).

Swanwick’s latest novel, Chasing the Phoenix, finds our two con-men/heroes in post-collapse China, in the middle of a brand new con… one that quickly spirals beyond their control, and soon attracts the kind of attention they’d much rather avoid.

In the distant future, Surplus arrives in China dressed as a Mongolian shaman, leading a yak which carries the corpse of his friend, Darger. The old high-tech world has long since collapsed, and the artificial intelligences that ran it are outlawed and destroyed. Or so it seems.

Darger and Surplus, a human and a genetically engineered dog with human intelligence who walks upright, are a pair of con men and the heroes of a series of prior Swanwick stories. They travel to what was was once China and invent a scam to become rich and powerful. Pretending to have limited super-powers, they aid an ambitious local warlord who dreams of conquest and once again reuniting China under one ruler. And, against all odds, it begins to work, but it seems as if there are other forces at work behind the scenes…

Have you read his collection, also titled THE DOG SAID BOW WOW? I think it collects several Darger and Surplus stories.

Honestly, I don’t think I even knew it existed. It’s hard to keep up sometimes. 😉

I’ll definitely be snagging a copy now though.

Whoops, I was wrong. Amazon tells me that I bought it way back in 2008. It’s apparently sitting on my bookshelves, on my far too long (though happily so) to-be-read list.

Thank God for Amazon’s habit of telling you when you’ve already purchased something… it’s saved me from making more duplicate purchases than I care to admit!