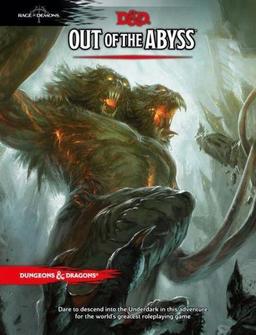 For all the accolades and buzz for Dungeons & Dragons Fifth Edition, there have been shockingly few releases supporting the game. Beyond the core rulebooks (published 12 months ago now), Wizards of the Coast has published only two adventures, one accessory, and a DM’s screen:

So I was very pleased to see another major item on the publishing schedule: Out of the Abyss, a massive 256-page Underdark adventure for characters of levels 1–15.

The Underdark is a subterranean wonderland, a vast and twisted labyrinth where fear reigns. It is the home of horrific monsters that have never seen the light of day. It is here that the dark elf Gromph Baenre, Archmage of Menzoberranzan, casts a foul spell meant to ignite a magical energy that suffuses the Underdark and tears open portals to the demonic Abyss. What steps through surprises even him, and from that moment on, the insanity that pervades the Underdark escalates and threatens to shake the Forgotten Realms to its foundations. Stop the madness before it consumes you!

The next release on the schedule is Sword Coast Adventurer’s Guide, an accessory that ties into the highly anticipated Sword Coast Legends computer RPG coming out next month. It arrives in November.

John, don’t forget WoTC has released a number of Unearthed Arcana pdfs for free on their site. While not lengthy, each does help add a little more to the rules of the game. It seems Wizards is taking a much slower approach to releases with this version of D&D (possibly, in part, because of past accusations of putting out too much material as a cash grab), but I would expect eventually they’ll have a print version collecting the Unearthed Arcana material, perhaps with new goodies as well.

Hmmm, good point. Although really, that doesn’t add up to one release.

By the one year mark after 3.0 was released, by my count WOTC had over a dozen supporting releases out — at least one per month. The rate here is less than a quarter of that… barely one per quarter.

John: I wouldn’t go that far. If you’ve ever read Steve Winter’s take on RPGs, you’ll readily understand that they are an unsustainable business model, and certainly the bean counters at Hasbro understand that. Thus, to maintain the license [for perhaps those new movie rights] they are keeping the game fresh and well designed with 5th Edition core rules, and then letting the industry itself profit off the ‘fat’ of supplemental design instead of investing more capital themselves in a broken model. Like Disney with Marvel, it isn’t about the comics, its about the license. WotC’s real responsibility is to maintaining a profit stream from Magic the Gathering, which does have a sustainable model. I mean, WotC didn’t even have an exhibitor booth at GenCon this year which should tell you everything you need to know about the pen & paper RPG business to them, but they have moved very nicely into the Video Game market with the license, so they are thinking outside the profit box on those so both they, and fans of D&D, win.

It appears to me that they are doing everything they can to fight against the rule bloat that so plagued 3.x. Heck, even Pathfinder is beginning to sag under the weight of mechanical additions.

When you combine the work they are doing to re-release earlier editions digitally with their focus on slow and quality support, I cannot feally find any fault.

I’ve disliked Forgotten Realms since Day One. Not because I’m a Grognard (I basically never played OD&D). I just can’t stand Greenwood’s world-building, along with the rest of the crap piled on it by others. A truly bad game-world.

If they ended it all tomorrow, I wouldn’t bat an eye. The main game-worlds of all other major FRPGs out there (on average) are better. WotC should have ushered in a new world with the new system and thrown off the dead hand of Elminster.

Deuce, I’ve never been a Realms fan, either, but the setting has been and continues to be popular with many, many fans of the games and the books, so there’s no financial reason for WotC to do away with the FR. Heck, fans of a certain dark elf alone are enough to keep the FR rolling for a long time, at least when it comes to the pocketbook.

And John, I understand where you’re coming from in comparing 5e and 3e, but as Scott pointed out, WotC is operating under a different philosophy nowadays concerning D&D. Instead of showing a lack of confidence in the system, I think they’re hoping not to have to come up with another edition for a very long time, at least a decade. I’d also guess the upcoming movie will play a huge role for the future of D&D as a brand, and if the film takes off big time, maybe there’ll be more products; if the movie falters … well, still, maybe there’ll be more product to try and make up for any losses. Or maybe not. Admittedly I’m blowing smoke, but either way, WotC seems to be taking quite a different approach to D&D products and the brand than they (and TSR) did in the past.

I’m going to sign on for the other side. I quite like the Forgotten Realms and it’s my favorite TSR/Wizards world.

Though in practice, I use Golarion and The Lost Lands (Frog God Games) for stuff these days.

Curious what people don’t like about Forgotten Realms. I’ve always liked it. Currently, I’m focused on the Mystara world of Basic D&D (somehow I was never aware of it in the 80s, but then again I only played AD&D back then).