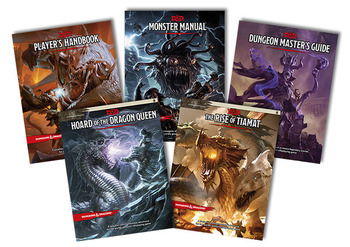 Setting the stage for the release of the newest set of Dungeons & Dragons rules, Wizards of the Coast today announced that August 2014 would mark the start of their Tyranny of Dragons campaign. In addition to the core manuals for the Dungeons & Dragons game system, the campaign will feature adventures within the Dungeons & Dragons setting, both in printed books for tabletop play and also as a new game module released for their Neverwinter game. The adventure begins on August 14 and winds its way through a number of key releases that are looking to modernize the game.

The D&D Player’s Handbook is slated for release on August 19, 2014. The revised D&D Monster Manual will be available in September. The D&D Dungeon Master’s Guide releases on November 18, 2014. All three books will have a retail price of $49.95 ($57 Canadian).

Tabletop fans will be able to join in on the Tyranny of Dragons adventuring action (also released on Aug. 19) with the adventure supplement Hoard of the Dragon Queen, for $29.95 ($35 Canadian):

In an audacious bid for power the Cult of the Dragon, along with its dragon allies and the Red Wizards of Thay, seek to bring Tiamat from her prison in the Nine Hells to Faerun. To this end, they are sweeping from town to town, laying waste to all those who oppose them and gathering a hoard of riches for their dread queen. The threat of annihilation has become so dire that groups as disparate as the Harpers and Zhentarim are banding together in the fight against the cult. Never before has the need for heroes been so desperate.

The Rise of Tiamat is an adventure supplement being released on October 21, 2014, also for $29.95 ($35 Canadian). Here is the description from the website:

The Cult of the Dragon leads the charge in an unholy crusade to bring Tiamat back to the Realms, and the situation grows more perilous for good people with each passing moment. The battle becomes increasingly political as opportunities to gather allies and gain advantage present themselves. From Waterdeep to the Sea of Moving Ice to Thay, it is a race against Evil. Succeed or succumb to the oppression of draconic tyranny. Win or lose, things will never be the same again.

If you can’t wait until August to get started, you’re in luck. The D&D Starter Set is coming out in July and is available for pre-order now.