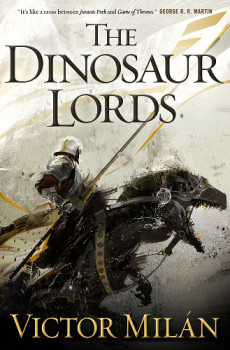 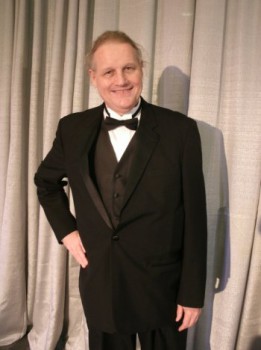 I had the opportunity to sit down with Victor Milan last month to discuss his current release, The Dinosaur Lords. As a member of his writers group, I’ve read the early drafts of this novel and am very excited to see it in print. George RR Martin refers to it as “Game of Thrones meets Jurassic Park,” and that’s a pretty good synopsis.

Set on the lost Earth colony of Paradise, feudal society humans live among dinosaurs of all epochs – wild dinosaurs, tame dinosaurs, and even war-mount dinosaurs. Hence the awesome knight on dino-back image that graces the cover of the book. Combine this with the sudden manifestation of a mythical angel of doom, and you’ve got the kickoff event of the story.

While Victor Milan is a well-known, prolific author, many people don’t know how prolific. On top of the dozen novels out under his own name, he’s also written many, many more under pen names. His career so far spans thirty-one years of publishing history, including the infamous midlist apocalypse of the 1980’s. Together, he and I discuss the ups and downs of the business and his journey so far.

The interview is just under half an hour long. As always, I include time stamps for the different topics below, so you can jump to specific sections that interest you the most.

We begin with an introduction of Victor Milan and his newest releases, starting with his acclaimed short story in The Change: Tales of Downfall and Rebirth. In his Black Gate review, Ed Carmien said of Victor Milan’s “The Seeker: A Poison in the Blood”:

This gritty western begs for more, evokes Eastwood and other less Anglo western influences, and solves the problem of the story with verve and originality — if “verve” can be used in a western setting.

We then move on to his novel, The Dinosaur Lords (which John O’Neill previewed here).

We are in Page 1 Bookstore, an independent bookstore that is very supportive of the author community.

1:05 An overview of The Dinosaur Lords, “Game of Thrones meets Jurassic Park” – George RR Martin. First an overview of the world, Paradise.

3:38 We discuss the religion of Paradise, and the spiritual event that kicks off the plot.

6:15 How fantasy and science fiction blend in this series.

7:11 Vic introduces a few individual dinosaurs (some of the best characters in my opinion) and outlines his depiction of dinosaurs in general.

9:52 The political situation on Paradise.

13:28 Vic outlines his 31 year long career and lists off several of his pen names.

14:43 We discuss writing under house names and doing work for hire.

18:12 A summary of books under his own name and the early books he wrote.

22:40 Vic describes the process of relaunching his career of writing under his own name.

24:30 He outlines the process of selling The Dinosaur Lords books to Tor and having it edited.

26:30 Summing up The Dinosaur Lords one more time, including a discussion of a dinosaur with metallic paint.

Emily Mah is a writer and the owner of E.M. Tippetts Book Designs, a company that provides formatting, cover design, and editing services for independent authors and publishers. Her last interview for Black Gate was with C.A. Suleiman.

I’m reminded of reading the War of Powers series he co-wrote with Robert Vardeman back in the 80s. Here in Australia, for the longest time only remaindered copies of three of the books were available:
In the Shadow of Omizantrim
The City in the Glacier
The Destiny Stone

I hunted and hunted through the second hand stores but in the end imported the remaining books. Great sword and sorcery, with several great protaganists, fights and adventure, and of course, lashings of sex!

I gather a lot of his early work is difficult to find. Your comment reminds me that I should really interview Robert Vardeman, shouldn’t I? (He is also a very cool person.)