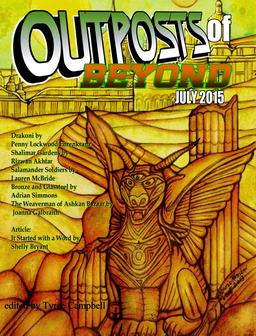 Outposts of Beyond has a name that connotes intergalactic travel, parallel dimensions, and the dark, far-flung regions of the universe — all trappings of science fiction. So it comes as no surprise that, even though the magazine contains fiction and poetry in the SF and fantasy genres, it leans a little more toward the former, at least in the case of the July 2015 issue. But this is Black Gate, so I’ll stick with the fantasy content.

“Drakoni,” by Penny Lockwood Ehrenkranz, is a real-world-meets-fairyland story that might have a certain amount of charm for the pre-teen and early-teen crowds. Ultimately, though, it didn’t strike me as very original and didn’t develop the protagonist effectively. And there’s a hint at her otherworldly nature at the beginning of the tale that never really gets resolved or explained, leaving a troubling loose end. I think the ending is supposed to be happy, but it only left me feeling sorry for the heroine, who seemed to be retreating from a lonely reality.

“Of Feather and Claw,” by Jason Lairamore, is a story of two lost children trying to return to their parents, but they’re stuck serving as pawns in a war between a pack of giant coyotes and a murder of sentient crows led by an over-sized corvid king. Their efforts fail, but help arrives in unexpected forms.

This tale had a delightful weirdness to it, but even weirdness can do with some basic realism in which to ground it. In some cases this was lacking, like when a child shows no reaction after suffering a horrific injury. This sense of detachment lent the story a folkloric or mythological feel, which may have been the point, but for me it was a bit jarring. Lairamore rounds the tale out nicely, though. Worth reading.

“The Weaverman of Askhan Bazaar,” by Joanna Galbraith, is a beautiful tale, written in a flowing, lyrical style, all wrapped around an intriguing premise involving words, the colored threads they leave behind, and the lost art of weaving them together. Galbraith also adds a dash of humor to this story of an old man and a young girl learning their true worth from each other, and she merges all of these elements into an exceptionally pleasing read. This is a good one for those who like to ease into the heart of a story, learning a little more about the people and places involved before being immersed in their conflicts. It also delivers on the magazine’s promise of interesting settings. It’s easily my favorite of the issue, and well worth reading — and then reading again.

That’s it for the fantasy fiction; the five other tales in this issue would be classified as science fiction. So, on to the poetry, where two of the six pieces fall into the fantasy category.

I soaked up the imagery in Shawn Vimislicky’s “From Seven Suns to Six Moons,” which flows between lovely and wicked, hopeful and tragic, light and dark, and leaves you feeling unsettled.

Rizwan Akhtar’s “Shalimar Gardens” I believe makes references to the 17th century reign of Shahabuddin Muhammad Shah Jahan over the Mughal Empire (modern day India, Pakistan, and Bangladesh). While the images of this ruler’s monument building are beautiful, I think I would appreciate their nuances more if I had greater knowledge of that region’s history. Still, the crux of the work — the harshness of a strange language being imposed upon another culture — pierces at the end.

Unfortunately, the Kindle version of this issue suffers from a few formatting issues and a few editorial gaffes that detracted from the reading experience, but they were by no means ubiquitous. I can’t speak to the print version. And while this issue doesn’t have the heroic adventure fantasy that Black Gate readers might be seeking, it has a few fantasy gems that made it worth the price.

And the magazine definitely has variety going for it, which will appeal to those who like a mixed bag of stories split between both fantasy and SF, along with an illustration or two and a smattering of non-fiction.

[…] esteemed John O’Neill over at Black Gate just posted my review of the July 2015 issue of Outposts of Beyond, a magazine featuring short fiction, non-fiction, and poetry in the science […]

Not reviewing the sci-fi? Here, let me open my shirt so you can more easily stab me in the heart!

Ha! Nothing personal, of course, Adrian. I just chose to focus on the fantasy aspects.

If it’s any consolation, I did read your story; it hooked me from the beginning and pulled me along, and I’m not even an avid reader of science fiction. You get bonus points for the profession you chose for your protagonist (I have ties with a lot of people in said profession, so it was nice to see one in the spotlight) and for a well-used reference to Weimaraners.

The only problem is, in the Kindle version I received, I think your story was cut off. It seems to end very abruptly–in the middle of the climax of the tale. If that’s the case, I’m hoping I can get Alban Lake to reissue it to me with the rest of the text. I want to know what happens next!

Nik, I got the hardcopy of the magazine, which has the complete story, so I’m not sure if there is a problem with the Kindle edition or not.

However, the story does end pretty suddenly, with the “Hope his plans work out” line.

That said, I always had sequels in mind, so you could do me a solid and tell Alban Lake that you were dismayed and disappointed that the story ended like it did, and surely, SURELY, that Simmons guy has more coming.

Well, it turns out there isn’t a problem with the Kindle edition, then. One great thing about that ending–it’s totally unexpected, and that’s not easy to achieve.

I sent the Outposts editor an email this afternoon.

Hi Nik – Thank you for your great review. It is always nice to hear when someone ( other than my cat) enjoys my tales.

You’re very welcome. It was a pleasure to read.