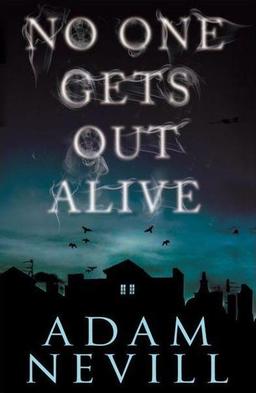 British horror writer Adam Nevill has been winning over fans here in the US, with books like Last Days and The House of Small Shadows (which Goth Chick reviewed for us here). His latest novel, No One Gets Out Alive, looks like it will continue that trend nicely. It was recently released in hardcover by St. Martin’s Press, and has just been nominated for a 2015 British Fantasy Award.

When Stephanie moves to the notoriously cheap Perry Bar neighborhood of Birmingham, she’s just happy to find an affordable room for rent that’s large enough not to deserve her previous room’s nickname, “the cell.” The eccentric — albeit slightly overly-friendly — landlord seems nice and welcoming enough, the ceilings are high, and all of the other tenants are also girls. Things aren’t great, but they’re stable. Or at least that’s what she tells herself when she impulsively hands over enough money to cover the first month’s rent and decides to give it a go.

But soon after she becomes uneasy about her rash decision. She hears things in the night. Feels them. Things… or people… who aren’t there in the light. Who couldn’t be there, because after-all, her door is locked every night, and the key is still in place in the morning. Concern soon turns to terror when the voices she hears and presence she feels each night become hostile. It’s clear that something very bad has happened in this house. And something even worse is happening now. Stephanie has to find a way out, before whatever’s going on in the house finds her first.