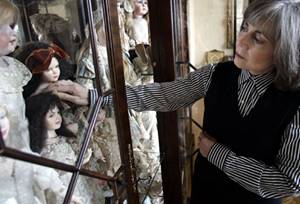 Some years ago, when Anne Rice was still in residence in New Orleans, I had the opportunity to tour one of her Garden District properties. St. Elizabeth’s was a 47,000 square foot Catholic orphanage built in the 1860’s and after it was purchased by Rice in 1993, one of its many uses was to house Rice’s extensive doll collection. A devotee for nearly twenty years, Rice had dolls from all over the world, including one-of-a-kind antiques and commissioned works, numbering over 2,000 individual pieces.

Now, I have been to some decidedly creepy places in my travels. I’ve spent an embarrassing number of hours hunkered down in dilapidated buildings or picking my way through damp, dark places clutching one ectoplasmic sensing device or another.

But in the rooms of Rice’s 19th century New Orleans monolith, crowded wall-to-wall with black-eyed, porcelain-faced dolls, was by far the most skeeved out I have ever felt.

Dolls rank right up there with clowns, which is probably why the movie Poltergeist featured a clown doll.

It knew what scared us, all right.

And so apparently does UK bestselling horror novelist, Adam Nevill. 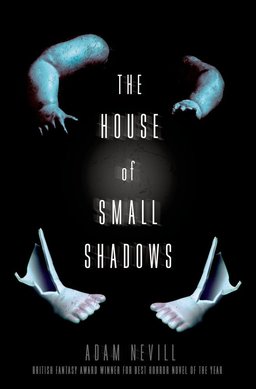 A couple of weeks back, we Americans were finally treated to the US release of Nevill’s most recent, doll-infested, creep-fest, The House of Small Shadows.

Fittingly published in the UK in October, 2013, Nevill’s fifth book did not break The Guardian newspaper’s Top 100 Books that year (not surprising if you saw the subjects of the books which did – silly Brits) but did do well enough to once again attract the attention of American publisher St. Martin’s Press, who gave Nevill’s work a US hardcover release for the first time.

Catherine’s last job ended badly. Corporate bullying at a top TV network saw her fired and forced to leave London, but she was determined to get her life back. A new job and a few therapists later, things look much brighter. Especially when a challenging new project presents itself — to catalogue the late M. H. Mason’s wildly eccentric cache of antique dolls and puppets. Rarest of all, she’ll get to examine his elaborate displays of posed, costumed and preserved animals, depicting bloody scenes from the Great War.  Catherine can’t believe her luck when Mason’s elderly niece invites her to stay at Red House itself, where she maintains the collection until his niece exposes her to the dark message behind her uncle’s “Art.” Catherine tries to concentrate on the job, but Mason’s damaged visions begin to raise dark shadows from her own past. Shadows she’d hoped therapy had finally erased.  Soon the barriers between reality, sanity and memory start to merge and some truths seem too terrible to be real…

I found Nevill extremely successful in creating an atmosphere of oppressive paranoia. The Red House where the story is set, and the nearby decrepit village of Magbar’s Wood, both exude a sense of being forgotten, tucked away into their own secret corner of England where all the best ghost stories are from.

In the vein of classics like The Haunting of Hill House and The Shining, The Red House itself often transcends from being simply a building into a character in its own right. Populated by the highly eccentric, if not completely insane, niece of artist M.H. Mason, as well as her mute, unfriendly housekeeper, The Red House soon becomes a prison for Catherine. The house is too close, sometimes breathing right over your shoulder in the form of Mason’s gruesome exhibits and creepy collection of dolls, pushing an already tense, scary atmosphere into one of pure terror.

Having never read any of his four previous works, I was very excited to stumble upon Nevill and into The House of Small Shadows, via British review site The Book Smugglers.  I will certainly look into his other stories – in particular Apartment 16, having spent a year living just outside of London and walking past a darkened flat like the one on the cover nearly every day.

As for St. Elizabeth’s in New Orleans, Rice sold it in 2003 and in 2005 it was turned into 28 condo units.  Word has it Rice sold her doll collection en masse in a separate auction, but my guess is that at least a few of them remained behind.

Under beds and in crawl-spaces, no doubt.

The House of Small Shadows was released in the US on July 15th and is available at Amazon and Barnes & Noble in print and ebook formats.

Have you read any of Adam Nevill’s previous works or have a doll phobia?  Post a comment or drop a line to  sue@blackgate.com.