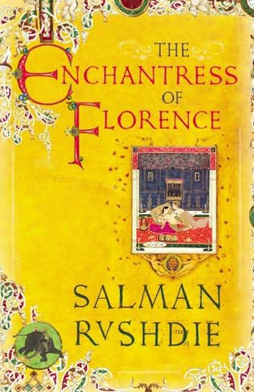 In some ways Salman Rushdie’s 2008 novel The Enchantress of Florence feels like a classic pulp fantasy entertainment. A bit less than a hundred years ago you could find a lot of pulp set in India, central Asia, and the Middle East: Harold Lamb recounting colourful histories of the great Mongol conquerors and Timur-Leng; Fritz Leiber imagining a pair of sword-wielding comrades he’d later recast as heroes of no-when; Arthur D. Howden Smith telling of the adventures of the Grey Maiden, the first sword made of iron; Talbot Mundy presenting theosophy-inflected occult sagas; Robert E. Howard, perhaps inspired by Lamb, writing grim war tales of battles against Genghis Khan and his great general Subotai. It’s interesting that when Michael Chabon tried his hand at a pulp-style adventure novel, he set it in Khazaria.

Naturally there are an awful lot of differences between The Enchantress of Florence and the pulp tales. Rushdie’s prose is more baroque even than Leiber’s. The structure of the book’s vastly more intricate, a narrative maze of stories and stories-within-stories. And, of course, The Enchantress of Florence is written as it were from the east looking west, rather than the reverse.

Still: it is a story set in a time of swordsmanship and adventure — the late sixteenth century, to be precise — and it glories in the lurid and the larger-than-life. It’s a tale of emperors and kings and generals, of subtle enchantresses and the brutality of war. It’s a book fascinated by what used to be called romance, by action and magic. And if its style and structure are more elaborate than anything in the pulps, that’s a sign that Rushdie’s book is actually even more charged with storytelling energy: with humour and grotesques and sex and politics and death and all kinds of things, one following fast upon another. 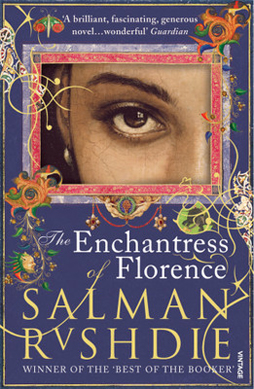 It is I think a book mainly about story itself: about the richness of story. About the way stories can evoke life and shape the world. Like Rushdie’s first novel Grimus, it is about how stories cross from culture to culture, bringing peoples together whether they like it or not. So in this case he tells a tale about cultures meeting, intermingling, and often making war on each other; a story therefore about stories being shared and changed by encounters with the other, not always in pleasant or just ways, but inevitably and creatively. And so it is about what happens when stories come together, how some stories are undermined by others, how some stories are strengthened by others, how all things are provisional and changeable, and how the freedom to tell a new story is the freedom to reinvent the world.

In a broad sense, the book follows a traveller from Europe who comes to the court of the Emperor Akbar. There, the young man explains that he’s the child of an unknown Mughal princess — and there is reason to think he might be telling the truth. The story he tells to explain his origin ranges across continents and years. And contains within itself further stories. All of which meet the stories of the Emperor and his court. Which collectively work with the traveller’s tales, until all the stories build a larger story yet.

It’s clearly not a genre novel, but the constant exuberance and sense of adventure catches the same energy that the best genre fiction gets at. At the same time, there is the burned-out weariness of age in this book, and a sense of the wickedness of the worldly. Bearing that in mind, A Song Of Ice And Fire might also be a useful point of comparison: an epic of knights and kings and battles and magic, of betrayal and loss. But also a story aware of the provisional nature of story: a story sceptical of stories. A story which suggests there’s more to the past, to the story of history, than what’s accepted — and much more than what people want to believe. Rushdie’s at least as sceptical as Martin of honour and idealism and chivalry, but he’s also somehow warmer, more generous. The lack of chivalry in the world is seen not as loss but as freedom, as an opportunity to open up to wilder things. Perhaps the difference between the two writers is that Rushdie’s not just disenchanted but re-enchanted. Martin, like many genre writers, has magic in his story serve as a tool, entering the world only to become a weapon of kings; Rushdie knows magic is wilder, and cannot be controlled or ordered. It makes, in fact, an unreliable weapon likely to turn against the user. You never really become disillusioned; you only ever swap one set of illusions for another, as you swap stories. 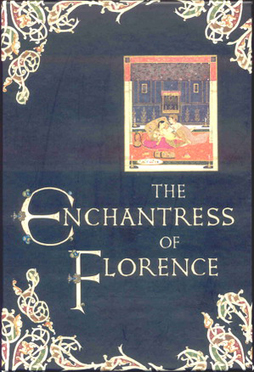 For Rushdie, stories seem to work best when in profusion. There is a sense here of Enlightenment ideals: out of many stories, truth, however qualified, may emerge. Stories challenge each other. Fundamentalism and storytelling are, in Rushdie’s telling, utterly opposed approaches to life. There is a transience to story and art — the opening image of the book is a lake turned gold by the reflection of a sunset for just a moment, and this returns at the end just as images of mirrors and the inconstancy of water seem to run through the book. But that transience is what makes a story a story. The ending is a part of the structure. A story exists mainly in memory.

But a story, in The Enchantress of Florence, can also create life: the Emperor has a wife who is not real, born only from his imagining, his stories of her. Stories are a mirror for nature, then, but things can go the other way. There’s an artist in this book who paints himself into his creation in order to be with the beauty he’s pictured. So in the story of the book stories have to do with the permeability of the real and unreal.

If this sounds like magic, I think it’s interesting to note that one of the most magical of all the items in the book is the long coat the harlequin-like traveller wears as he approaches the Emperor. It is a coat of many pockets, which seem to contain everything. It is “an occultist marvel of a greatcoat, its lining a catacomb of secret pockets and hidden folds,” and seems an apt symbol for fiction’s infinite variety. The man who wears it is a storyteller, always producing wonders from nothing. And it’s a harlequin’s coat, fitting (as it were) the infinite storyability of the commedia dell’arte, the same cast of characters that improvise around plot structures so that every performance is different: always another twist. 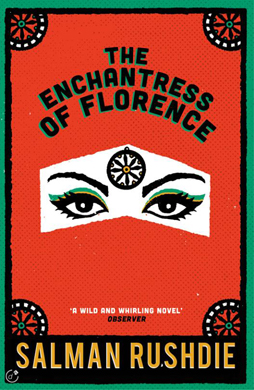 If part of the point of the book is that history is an agreed-upon fiction, then Rushdie takes full advantage and storifies history. His Emperor Akbar, already a figure familiar to tale-tellers, is a king out of the One Thousand and One Nights. His Enchantress turns out to be related to the lead figure of Ariosto’s Orlando Furioso. Niccolò Macchiavelli has a prominent role (here clearly outdoing A Song of Ice and Fire: Martin may have machiavellian characters, but Rushdie’s got the actual Machiavelli as a character). These histories bounce off each other in striking ways: it’s a small world, but complex. There’s an anthology-like feel to the book, to all its stories within stories and stories that lead to stories. These stories are about everything: love, death, even about living beyond the end of one’s own personal story. They’re about sex, and time, and space. About religion, and magic, and truth: about disputation. About the elements, and water. About change, above all, which is in its nature story: a story is about change, or the potential for change, and thus we may speak of the cauldron of story, or, as in a former title of Rushdie’s, the sea of stories. The sea that overwhelms, that breaks down.

Except, of course, that if Rushdie seems to build a world in this novel he only actually builds half a world. The book’s filled with male stories and male narrators. Women in these tales are typically defined by their sexuality and the use of that sexuality. There are a lot of whores and wives, and a few rare witches. Even the Enchantress of the title has an uneasy relationship to her city defined by the Florentines’ emotional response toward her. The stories here are therefore stories told by men about men, which is to say stories men want to believe about what it is to be a man. But even granted that (which some readers may not care to grant), there’s another absence: there’s very little in this book about homosexuality. These are straight stories in more than one sense, and the book’s apparent aspirations to universality — or at least to a universality among males — seems undercut by the lack of variation in sexuality.

Still, the main themes of the book come across. Particularly, the value of stories in opposition to power. The novel’s an eloquent rebuttal to the idea (which I’ve seen put forward by some novelists) that storytellers are not special. In fact all crafts, all people, all paths are special, says the novel; only, the storyteller can show how. Stories do not define things, not finally, but they do define how things relate to things, past to present to future, and therefore define what we are to think of things; but then other stories challenge these definitions. Nothing’s fixed, nothing settled. Everything moves, like the sun off of water, like the earth around the sun (which, as Akbar points out, was known in his realms centuries before Copernicus changed the story by which Europeans explained the world). I began by talking about pulp fiction, which may surprise people who think of Rushdie as a different kind of writer, but then that is part of the point of the book, that it is an error to draw lines between types of story. It’s often convenient to do this for one reason or another, but it’s as much a rhetorical convenience, and as much a literal absurdity, as a spherical cow. In fact every story can be every kind of story, all at once. Rushdie’s written a great story, and it is a great story about story, a story that integrates genre writing and fine writing and every kind of narrative writing, an illusion that is true, a dizzying point in which all things seem to come together.

C. S. Lewis, in his An Experiment in Criticism, claimed that great Literature was easy to spot because it forces its readers to come to a single, unified understanding. Curiously, that type of response is what I think distinguishes a Fundamentalist approach from a Literary approach, in which great Lit is open to multiple interpretations, often by the same reader upon re-reading. I guess I line up with Rushdie and the many-pocketed coat wearers.

Oddly enough, I’ve been working on writing something about Lewis that should go up here at some point after Fantasia wraps up — so sometime in August, possibly September. But I hadn’t made the connection, though it’s a really good point. Lewis consciously aligned himself with a conservative tradition (as he identified it in The Abolition of Man), and absolutely saw the kind of absolutes that Rushdie’s suspicious of. I think on a personal level I agree with you and Rushdie.