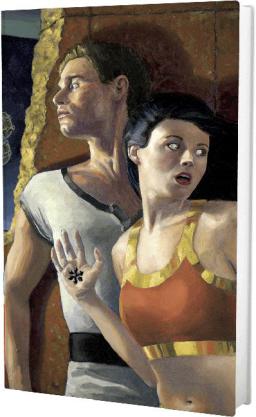 Long before the dystopias inhabited by Peeta and Katnis, or Tris and Four, there was life under the domes with Logan 3 and Jessica 6.

Originally published in 1967, Logan’s Run is a classic science fiction novel that has rarely been out of print in the subsequent years. It has also been a movie (and about to be a remake), a television show, several iterations of comics, music and even a computer game.

In the world of 2116, a person’s maximum age is strictly legislated: twenty one years, to the day. When people reach this “Lastday” they report to a “Sleepshop” in which they are willingly executed via a pleasure-inducing toxic gas. A person’s age is revealed by their palm flower crystal embedded in the palm of their right hand that changes color every seven years, yellow (age 0-6), then blue (age 7-13), then red (age 14-20), then blinks red and black on “Lastday”, and finally turns black at 21. The story follows the actions of Logan, a Sandman charged with enforcing the rule, as he tracks down and kills citizens who run from society’s lethal demand, only to end up running himself.

Logan’s Run has been one of my favorite books since I first discovered a dog-eared paperback at a library book sale in high school. Since then I’ve never not had a copy on my shelf and periodically go back to reread it – the story never ceases to entertain.

That is why I could not have been more excited a couple months back to learn about a new edition distributed by Centipede Press. I nearly burned up my keyboard preordering a copy.

This new edition of Logan’s Run features striking dustjacket art, and over a dozen full page and spot black & white interiors, by artists Jim and Ruth Keegan. It has a new introduction by Jason V Brock, two bonus stories in Logan’s Return and The Thunder Gods, a gallery of old editions of the novel, excerpts from the original manuscript, and a few images from William F. Nolan’s personal notebook.

Two new Nolan stories and illustrations by the Keegans?

If you can’t immediately place the illustrators, Jim and Ruth Keegan are the creators of The Adventures of Two-Gun Bob, which appears in every issue of Conan, Solomon Kane, or Kull from Dark Horse Comics. They’ve also illustrated several books for Del Rey including Crimson Shadows and Grim Lands — The Best of Robert E. Howard. They’ve even done work for Black Gate — including the illustration for Renee Stern’s short story “Red Hell,” in Black Gate 14.

Scott (darling Art of the Genre) Taylor, are you listening?

But if it’s even possible, this gets better.

My copy of the new edition of Logan’s Run was somewhat later in arriving than I anticipated. Getting antsy, I dropped a line to my contact at Centipede Press who assured me it was on its way.

When the package arrived, tucked inside the pages of my copy was the following note:

Jared at Centipede Press told us they had somehow found themselves short of copies of Logan’s Run before yours was sent out. He’s very sorry about that and asked if we could please forward you one of ours – which we are happy to do.

We hope you don’t mind that we added a small sketch in the front of the book. 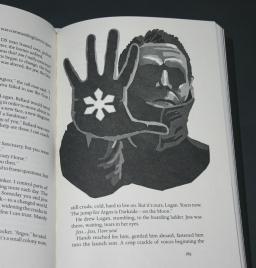 Do I mind? Owning an original, autographed Keegan illustration?

The note is in a frame, the book is in a dustcover, and you can own your own slightly less personalized copy by contacting Centipede Press at their website. They are the purveyors of a plethora of truly unique literary finds not to be missed.

Neat, I had no idea the comic was based on a novel. I came across the comic when i reading up on Marvel issues that had the villain Thanos in them.

I skipped the few logan’s run issues when i came to them. Now i wish i didn’t. I wonder if their on Marvel Unlimited…

I’ve loved this book since I first read it nearly fortyyears ago. The first sequel’s pretty good too. I’ve thought for a long time that Judge Dredd’s world owed alot to Clayton and Nolan.

I need a copy of this as I always was enchanted by the movie but I bet the book is SO much better.

The book is wonderful with so many more dimensions than the movie, though the film is a lot of fun on its own. Did you know it was Farrah Fawcett’s first movie role?

Glenn – you can find the comics online for roughly $100 per issue. However, now that there is a Logan’s Run remake in the works, maybe Marvel will take the opportunity to do something with the comic. Word on the underground grapevine is that after Ryan Gosling pulled out of the project, Warner Brothers is reworking the script to accommodate a female lead (ala Hunger Games and Insurgent). Considering the source material has little to do with whether the lead character is male or female, this just might work. Right now the movie remains in development hell.

Darling Art – for you, I have contacted Centipede Press to see the status of reprints and will let you know. In the interim, you’re always welcome to the basement to have a look at my copy. Just ignore that “Beware of the Leopard” sign and mind the stairs…