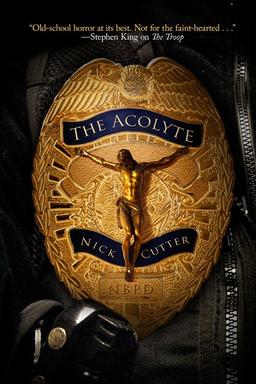 Nick Cutter is the pseudonym for Craig Davidson, author of Sarah Court and Cataract City. Davidson explains the Cutter identity was created at his agent’s suggestion, to help readers differentiate between Davidson’s more serious output, and “the gore-spattered nightmares” of Nick Cutter. The Troop, his debut novel under the name Cutter, was one of the most acclaimed horror novels of last year. It won the Jame Herbert Award for Horror Writing, and Stephen King said “The Troop scared the hell out of me, and I couldn’t put it down. This is old-school horror at its best.”

Cutter’s new novel The Acolyte appeared from ChiZine last month, and it’s even more interesting to me than The Troop. A police procedural set in a religious dystopia where the police are responsible for eradicating heretical religious faiths, it follows acolyte Jonah Murtag as he unravels the truth behind a mysterious string of urban bombings.

Jonah Murtag is an Acolyte on the New Bethlehem police force. His job: eradicate all heretical religious faiths, their practitioners, and artefacts. Murtag’s got problems — one of his partners is a zealot, and he’s in love with the other one. Trouble at work, trouble at home. Murtag realizes that you can rob a citizenry of almost anything, but you can’t take away its faith.

When a string of bombings paralyzes the city, religious fanatics are initially suspected, but startling clues point to a far more ominous perpetrator. If Murtag doesn’t get things sorted out, the Divine Council will dispatch The Quints, aka: Heaven’s Own Bagmen. The clock is ticking towards doomsday for the Chosen of New Bethlehem.

And Jonah Murtag’s got another problem. The biggest and most worrisome…

The Acolyte was published by ChiZine Publications on May 19, 2015. It is 301 pages, priced at $16.99 in trade paperback and $9.99 for the digital edition. The cover art is by Erik Mohr. I got my copy at the Nebula Awards weekend here in Chicago in early June. See our recent survey of the impressive ChiZine catalog here.