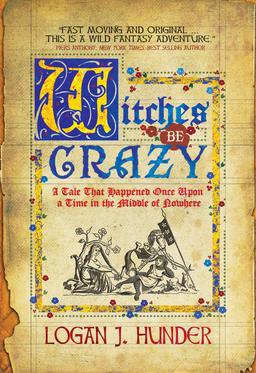 Humor is tough to get right. So when I hear pre-release buzz about a book that gets it right, I pay attention. Logan J. Hunder’s debut novel Witches Be Crazy, coming next month from Night Shade Books, has been called “A wild fantasy adventure” by Piers Anthony, and “Laugh-out-loud hilarious… Witches Be Crazy skewers fantasy tropes and hoists them high on their own petard (whatever a ‘petard’ is)” by Kevin J. Anderson. Featuring a masquerading princess, pirates, cultists, crazy hobos, and a heroic innkeeper, Witches Be Crazy could be just what I’m looking for.

Real heroes never die. But they do get grouchy in middle age.

The beloved King Ik is dead, and there was barely time to check his pulse before the royal throne was supporting the suspiciously shapely backside of an impostor pretending to be Ik’s beautiful long-lost daughter. With the land’s heroic hunks busy drooling all over themselves, there’s only one man left who can save the kingdom of Jenair. His name is Dungar Loloth, a rural blacksmith turned innkeeper, a surly hermit and an all-around nobody oozing toward middle age, compensating for a lack of height, looks, charm, and tact with guts and an attitude.

Normally politics are the least of his concerns, but after everyone in the neighboring kingdom of Farrawee comes down with a severe case of being dead, Dungar learns that the masquerading princess not only is behind the carnage but also has similar plans for his own hometown. Together with an eccentric and arguably insane hobo named Jimminy, he journeys out into the world he’s so pointedly tried to avoid as the only hope of defeating the most powerful person in it. That is, if he can survive the pirates, cultists, radical Amazonians, and assorted other dangers lying in wait along the way.

Witches Be Crazy will be published by Night Shade Books on July 14, 2015. It is 352 pages, priced at $15.99 for both the trade paperback and digital versions.

Kevin Anderson can’t seriously be in the dark as to what a petard is, can he? I mean, with all the battle scenes he has to write, petards are a crucial part of his bailiwick. (Vocabulary fails me, it’s a sesquipedalian thing.