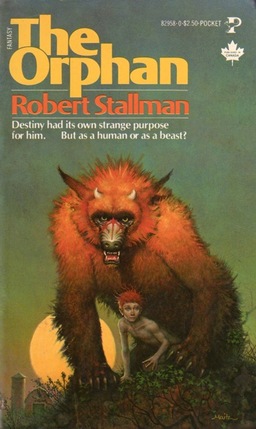 I write this on an emotional high, a plateau from which I never wish to descend, for I’ve just managed the impossible: I’ve gone back in time. The vehicle employed? A book, prose, a worn paperback. It’s Robert Stallman’s The Orphan.

I first encountered this title somewhere in the Dark Ages, probably around 1980. I re-read it perhaps two years later, along with its two sequels, The Captive and The Beast. Even though large swaths of plot have faded from my mind over the years, I have never, ever forgotten the book’s opening lines.

I am and will be. There is no time when I am not.

This is the first lesson.

My need creates myself.

This is the second lesson.

This is the third lesson.

I’ve spent the last thirty-five years considering those quotes (and the ideas behind them), polishing each like a gem-cutter finishing off a jewel. I’ve road-tested them, too, as a survival mechanism when, in my earliest teens, I tried out (as actors might try a cape) the attitude of Kipling’s cat, the one that walked by himself. It was necessary, in a way, but also foppish, affected. Even so, I found in The Orphan echoes of that chilly, solo stance — the same adopted in Westerns by virtually every gunslinger known, from Joel McRae to John Wayne and back again.

So once upon a time, my time, these lines held great personal weight. They were talismans, of a sort, and in picking up this gorgeous, dangerous title afresh, I was face to face with my past and the self I have since become.

For a moment, I had to look away. 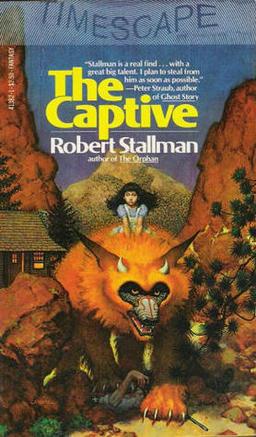 A book like this shouldn’t be anything special, right? Just a mangy Amazon-bought used copy of a forgotten paperback, long out of print. So long out of print, in fact, that before the dawn of the internet, I had given up hunting it down. (Perhaps if I’d frequented the dealers’ rooms at cons, I might have done better, but I had no knowledge of such things until recently. Clearly, in certain respects, I really did become the cat who walked by himself.)

So who was Robert Stallman? A simple question with no easy answers. Wikipedia doesn’t even have an entry (for shame!). I cannot find a verifiable photo on the web – and this for a published author absent from the scene for less than forty years.

Perhaps output (if not size) matters. Stallman was not prolific. He wrote only three novels plus one work of academic non-fiction. Born in 1930, he died in 1980, just after the publication of The Orphan. He never saw the release of either The Captive or The Beast, and while I’m not quite certain of the timing, I suspect he never knew his debut novel had garnered a Nebula nomination.

Some have written off The Orphan as derivative, a werewolf tale in sheep’s clothing. That’s a shallow reading, in my view, for Stallman, a mystic at heart, had other fish to fry, most of them astral. As the later books make clear, this particular beast isn’t some monstrous demi-wolf at all. Rather, he (or it) is a lost and not necessarily corporeal being, stranded in various forms not his own, and the arc of the books tracks the beast’s initially lazy but increasingly desperate attempts to identify what on earth he is, and find his way “home.”

Stallman, then, wasn’t writing werewolf stories. He was employing a select few shape-shifting tropes to get at the human condition. If in the last book he ventured into Richard Bach territory, well, he can be forgiven (as Bach himself likely cannot); he wasn’t available to give The Beast any sort of final polish. 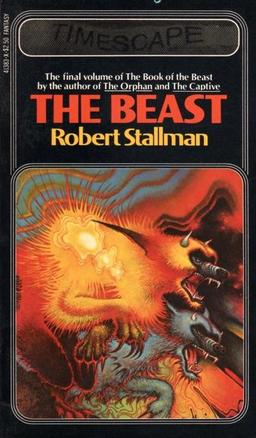 Spoiler-free, I can say this much. Set in the farms and rural towns of Great Depression Michigan and Indiana, The Orphan unfolds in a world all but forgotten unless one is reading Steinbeck or Bradbury – the latter a writer to whom Stallman has been compared. The settings are stark and provide a steady diet of loneliness for our loner protagonist. “Write what you know,” so sayeth the (supposedly wise) sages, and Stallman did: he was born in Kankakee, Illinois, and judging by the novels he left behind, his fiction never left — although, like the beast himself, he clearly wanted to.

The bottom line? Highly recommended. As a bonus, the Timescape editions, which are most common, feature evocative cover art by Don Maitz and provide testimonials by established greats like Fritz Lieber and Peter Straub.

I am and will be. There is no time when I am not.

And thanks for work you left behind.

Mark, I also read The Orphan back in the early ’80s, when I was in junior high — captivated, first, by that striking cover on the original Pocket paperback. It made quite an impression on me, too, although I never read it again, nor even knew who the author was until I read this revisitation of yours. Surprised Stallman’s work has become so obscure, given the accolades from the likes of Leiber and Straub.

Thanks for reminding us!

My pleasure. The first two really are deserving books. I’m not sure what I’ll think of THE BEAST on re-reading, but it’s on the list!