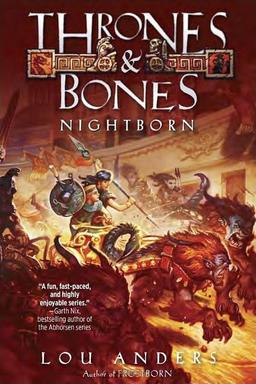 Lou Anders sent ripples through the entire industry last September when he stepped down as the Editorial Director at Pyr, where he’d launched one of the most successful and acclaimed new SF and fantasy imprints in a decade. What could possibly lure Lou away from such a stellar career? The breakout success of his first novel, Thrones & Bones: Frostborn, a middle-grade fantasy that was the start of an exciting new series. The second volume, Nightborn, finally arrives next month.

Karn Korlundsson is a gamer. Not a riddle solver. But in order to rescue his best friend, Thianna Frostborn, he will need to travel to the faraway city of Castlebriar (by wyvern), learn how to play a new board game called Charioteers (not a problem), decipher the Riddle of the Horn, and tangle with mysterious elves.

Meet Desstra. She’s in training to join the Underhand — the elite agents of the dark elves. When she crosses paths with Karn, she is not all that she appears to be.

Everyone is chasing after the horn of Osius, an ancient artifact with the power to change the world. The lengths to which Karn will go in the name of friendship will be sorely tested. Who knew that solving a riddle could be so deadly?

In an article for Black Gate last August Lou described his ambitions for Thrones & Bones, saying “I set out to build a world that would invoke all the sense of wonder I’d experienced myself as a reader, as large in scope and scale as Nehwon, or Greyhawk, or the Young Kingdoms.” Those ambitions are very clear in Nightborn, which also includes instructions for playing the game Charioteers featured in the novel.

Thrones & Bones: Nightborn will be published by Crown Books for Young Readers on July 14, 2015. It is 351 pages, priced at $16.99 in hardcover and $10.99 for the digital edition. Cover by Justin Gerard. Check out ThronesandBones.com for additional games, maps, character profiles, and more.