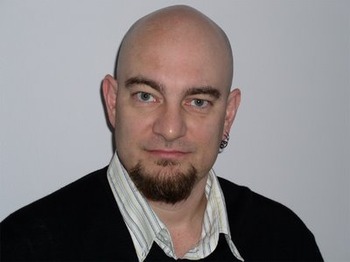 Publishers Weekly is reporting that Lou Anders, editorial director and art director of Prometheus’s Pyr imprint, will be leaving the company.

Lou has been the mastermind at Pyr since the imprint launched 10 years ago. We’ve written here of his success with the line many times over the years, and in my recent comments on K.V. Johansen’s The Leopard, I called Lou “the closest we have to Lin Carter in the field today: an editor with impeccable taste and boundless energy, who has also been a tireless champion for sword & sorcery.”

The highlight of my trip to Dragon*Con in 2010 was sitting in the front row of the Pyr Books panel, and the reason for that was the incredible stable of authors Lou had assembled — and the gorgeous books they had on offer. It was exciting to see so much terrific fantasy pouring out of one company, and Lou has been personally responsible for much of the finest adventure fantasy published over the last decade.

The reason given for his departure won’t be much of a surprise to anyone who’s watched the success of Lou’s first fantasy novel Frostborn, released through Crown Books for Young Readers last month. As a result of that success, Lou has chosen to “devote his professional energy to being a full-time author.” Rene Sears, Lou’s editorial assistant and slush reader, will step in to replace him as interim editor for Pyr.

Congratulations to both Lou and Rene for this career change. We wish them both luck. And Lou — you will be missed!

[…] at Pyr Books, was stepping down to pursue writing full time.  John O’Neill at Black Gate added some details this […]